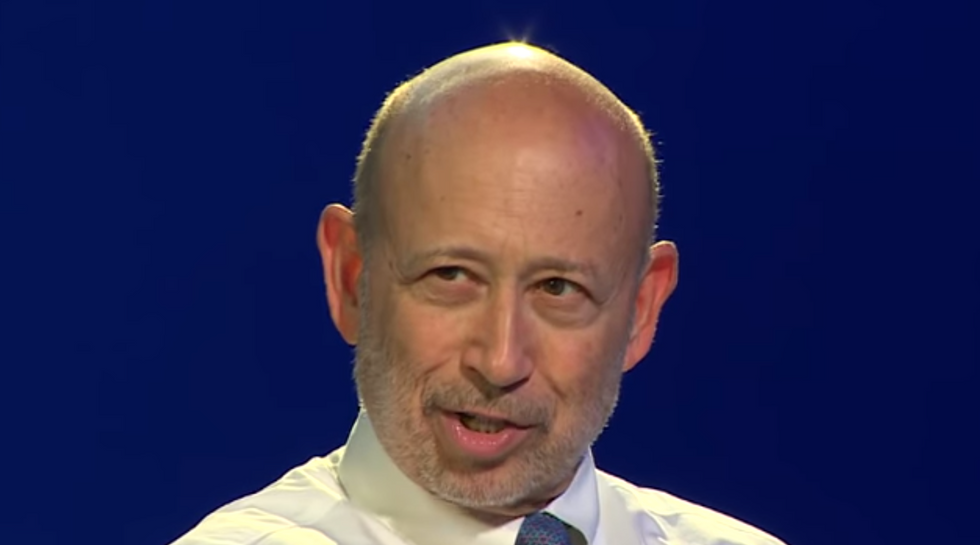 Goldman Sachs Senior Chairman Lloyd Blankfein supported Hillary Clinton for president in 2016, and was attacked by Donald Trump in ads throughout that election cycle for it. Blankfein has also consistently attacked Bernie Sanders since 2016, saying very bad things about Sanders’ economic policies. Specifically, Blankfein has always claimed that Sanders’ more egalitarian economic policy ideas would ruin the economy. Blankfein sat down for a $300 steak lunch with Financial Times reporter Edward Luce to give his thoughts on things. It is quite the nauseating read: He once again explains that Sanders would ruin the economy and that Trump’s economy has been great. In fact, when pressed on whether as a “lifelong Democrat” he would support whomever the Democratic Party nominated to run against Trump in 2020, Blankfein said, “I think I might find it harder to vote for Bernie than for Trump.”

I guess kids in cages are just better for business than universal health care?

This is a rich statement coming from the former CEO of Goldman Sachs, who admitted and apologized for helping to ruin the economy and create the 2008 financial crisis by promoting fraudulent toxic assets. But, listen, Goldman Sachs’ “retired” CEO explains, “Look, it’s crazy not to acknowledge the economy has expanded under Trump. Some of this is related to tax reform. The cheapest stimulus is getting rid of dopey regulations.”

Blankfein’s thoughts on the tax cuts helping to expand the economy is an interesting bit of bullshit. It has been proven over and over again that the tax cuts have been pocketed by the tippy-top percentile of wealthy Americans—like Blankfein—while nothing has been reinvested in building up and expanding business in any way that provides great new jobs. If anything, things are slowing down and contracting.

But Blankfein is a special kind of rich hypocrite—something of a Michael Bloomberg Democrat (and a friend of his). If you turn back the clock a couple of years, you might remember Blankfein and others whining about the need to “Fix the Debt.” Of course, there is zero talk of our ballooning debt now (though I suspect there will be for the next Democratic president), and Blankfein and other “Fix the Debt” blowhards all shut their pie holes the moment Republicans offered them free taxpayer money.

I guess having a president that actually believes climate change is real isn’t good enough business?

When Luce points out that billionaires like Blankfein are obviously worried about Sanders because he wants to tax people like Blankfein more, Blankfein gives this amazing response: “I don’t like that at all. I don’t like assassination by categorisation. I think it’s un-American. I find that destructive and intemperate. I find that just as subversive of the American character as someone like Trump who denigrates groups of people who he has never met. At least Trump cares about the economy.”

I guess the clear dismantling of our government’s checks and balances by a wannabe dictator is better for business than free state college?

There are just over 600 billionaires in America. There are well over 300,000,000 people in America. There have been thousands of children taken from their parents and detained in crappy centers through which private companies make billions from detaining those families and not providing simple and important medical interventions such as flu shots. But, yes, Lloyd Blankfein, you are the oppressed person in need of protections from [checking notes] … higher taxes.

Blankfein also explained away Donald Trump’s acquittal, saying that Democrats “said those things in a shrill way to raise the stakes on the outcome. I don’t think it’s unreasonable or cynical for a legislator to have said what Trump did was wrong, and showed bad character, but it was not at a level where we’re going to overturn an election nine months before the next one.” Forget about the fact that impeachment has nothing to do with “overturning” anything. It has to do with checking the corruption of the executive.

Blankfein proceeds to explain away the financial crisis that he had a big part in creating by calling those in the media calling for more serious punishment for his and others’ crimes as “disproportionate.” In fact, he analogizes the press attacks on CEOs like himself to tigers attacking antelopes in nature videos. Seriously.

But finally, when Luce asks him why he does not enjoy being wealthy, pointing out that even if Sanders or Warren got their wealth taxes passed, Blankfein and his descendants could be “full-time philanthropists in perpetuity,” Blankfein manifests the true vapidity of the greedy billionaire’s heart: “I can’t even say ‘rich.’ I don’t feel that way. I don’t behave that way.” He says in a totally relatable* way that if he were to buy a Ferrari, he would be worried about scratching it the whole time he drove it and wouldn’t be able to enjoy it. Amazing: Rich people are just like you and me!

To be honest, this interview made me think that the only American thing to do is to vote for a candidate such as Sanders or Warren who might actually help these guys part with even a tiny bit of their money.

*See me rolling my eyes out of my head.