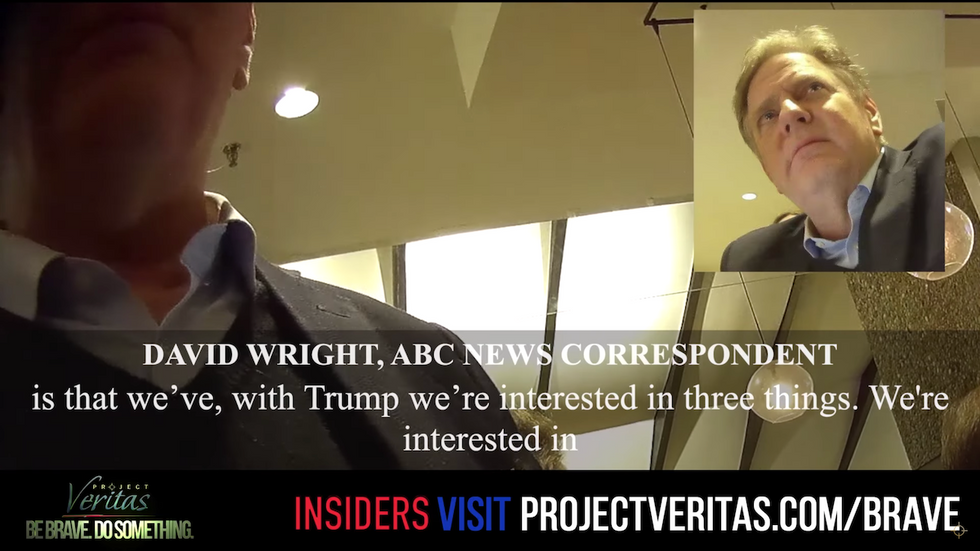 Journalists on Wednesday condemned ABC News for its suspension of David Wright, a 20-year veteran political correspondent, after reviewing an undercover video in which Wright spoke openly about his personal political views and his objections to some of the network's coverage.

The video was released Wednesday morning by the right-wing organization Project Veritas, which has targeted a number of media organizations in an effort to prove that they are biased against Republicans and President Donald Trump.

In the video, Wright and his colleague, producer Andy Fies, expressed what one critic viewed as "generic conventional wisdom" about corporate news coverage of Washington, D.C. and political campaigns. The two journalists did not appear to know they were being filmed.

it's terrible that ABC News suspended David Wright for this. a) are journalists not allowed to express a political… https://t.co/ggSKuGqXmj
— Rosie Gray (@Rosie Gray) 1582735123.0

Critics of ABC's decision suggested the network is playing into O'Keefe's narrative that journalists' privately-expressed editorial and personal opinions call a news outlet's credibility into question.

"Wright's comments aren't damning at all," tweeted Washington Post opinion columnist Radley Balko. "And the notion that journalists should never express opinions in private is absurd. O'Keefe is a fraud who operates in bad faith. Stop accepting his premise."

ABC and other corporate news networks are not "terribly interested in voters," Wright said, and "the truth suffers [and] the voters are poorly informed" as a result.

Wright and Fies expressed empathy for news viewers and voters who may benefit from seeing more serious examination of issues like economic inequality and the weak social safety net.

"Real people talk about practical issues when they're thinking about a candidate," Fies said. "'I want to go back to the workforce, I can't afford childcare, I need medical care.' Those things aren't TV-friendly things."

"I don't think we have the bandwidth to give everyone a fair shot," added Wright. "And we should."

It was unclear if Fies was also reprimanded for his comments in the video.

Wright also said the network largely isn't "doing the job we're supposed to do, which is to speak truth to power and hold people to account" and that ABC News is overly interested in covering "the outrage of the day" and "the horse race" of the 2020 election rather than "telling stories that we need to tell that are maybe hard to tell."

"We all presumably got into this industry because we care about the country," tweeted The Young Turks correspondent Emma Vigeland. "ABC just suspended David Wright for that."

We all presumably got into this industry because we care about the country. ABC just suspended David Wright for tha… https://t.co/bcZUrJ9Wn2
— Emma Vigeland (@Emma Vigeland) 1582739899.0

Several observers pointed to Wright's comments about his own political beliefs as a main reason for his suspension. Wright identified himself as a "socialist" in the video, expressed concern about wealth inequality, and said he supported "reining in corporations" and universal healthcare.

"Would 'I consider myself a capitalist' be a suspendable offense at any news outlet?" asked James Poniewozikof the New York Times.

In its statement about the suspension, ABC indicated that Wright, who led coverage of the 2016 election and has reported from the Middle East and Europe, will no longer cover politics when he returns to the network "to avoid any possible appearance of bias."

Ironically, Wright in the video criticized the network for making questionable editorial decisions out of fear that conservatives and Trump will accuse ABC of bias.

"We second-guess ourselves because we're sensitive to the accusation that we're in the tank for the Democrats," Wright said. "And it feels like every time we take the bait on the outrage, we enable him."