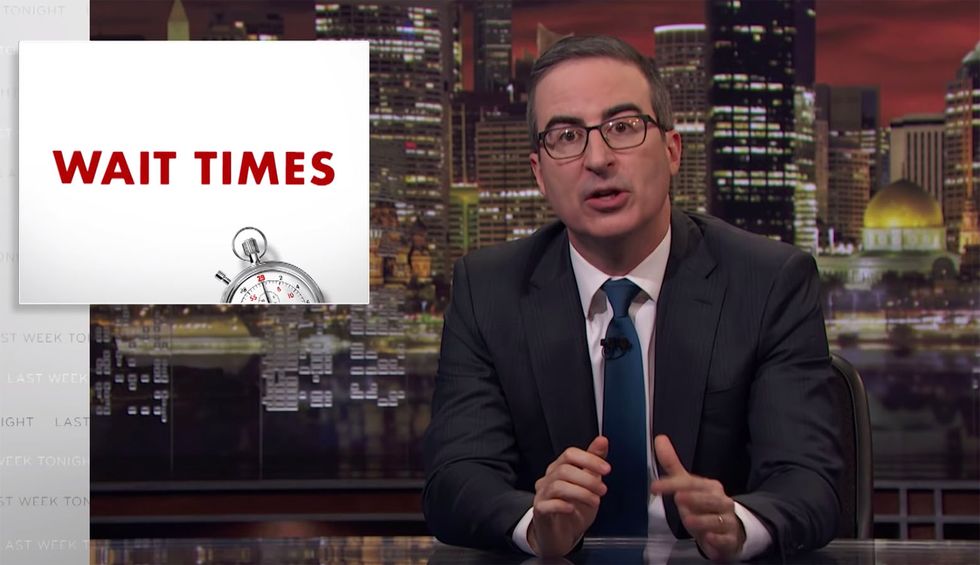 Comedian John Oliver used a 20-minute segment of his popular HBO show "Last Week Tonight" on Sunday to make the case for Medicare for All and ridiculed incremental alternatives like Pete Buttigieg's public option plan, which Oliver colorfully described as a "shit sandwich with guac."

Oliver described the Medicare for All plan proposed by Sen. Bernie Sanders (I-Vt.), a 2020 Democratic presidential candidate, as not only "more generous than most private insurance plans," but "more generous than the policy of any single-payer country on Earth."

"And there is a good case to be made that even if national spending [on healthcare] wound up higher," Oliver added, "we might wind up wasting less" under Medicare for All.

Oliver summarized and dismissed common objections to Medicare for All—from supposedly prohibitive costs to claims that single-payer would eliminate choice—and pointed out that Republican pundits and politicians are not the only ones attacking the proposal.

"Some Democrats have reservations too," said Oliver. "Pete Buttigieg, for instance, prefers a different concept to Medicare for All, but with a catchily similar name."

"What Buttigieg is referring to when he says 'Medicare for All Who Want It' is basically the public option," said Oliver. "It would definitely be an improvement over what we have now. The problem is it would leave so much of our current insurance infrastructure, with all of its problems, intact. So that's kind of like being offered either a shit sandwich or a slightly smaller shit sandwich with guac."

Oliver noted the major political obstacles to achieving Medicare for All but said the potential benefits of single-payer would far outweigh any risks.

"I get that big change is scary. It is human nature to prefer the devil you know over an uncertain alternative. But the devil you know is still a devil," said Oliver. "Since moving to America, I don't think I've met anyone who doesn't have at least one insurance industry horror story. At this point, the U.S. national anthem should just be everyone in a stadium yelling about their insurance company for two-and-a-half minutes."