Child at rally asks Pete Buttigieg for advice on coming out 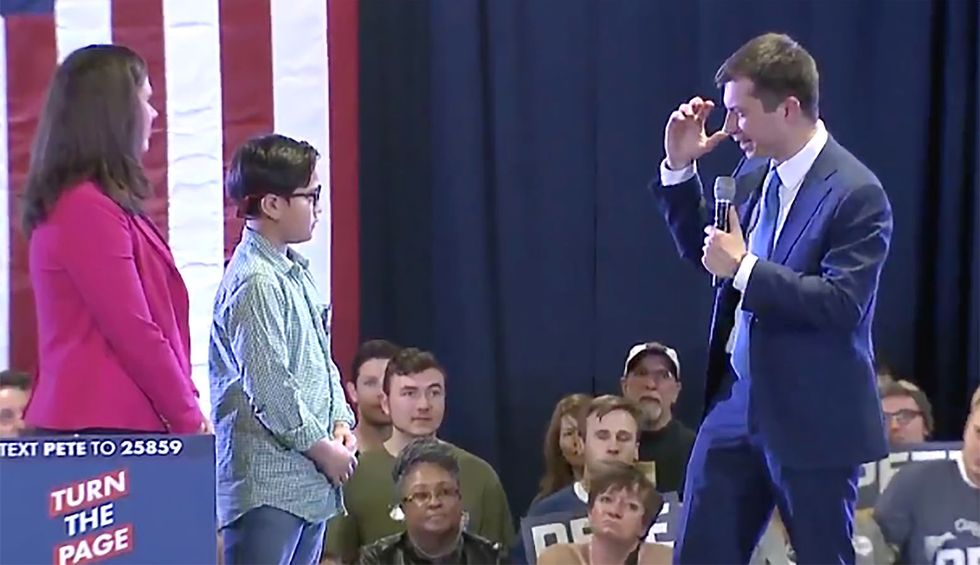 Former Mayor of South Bend, Indiana Pete Buttigieg shared a sweet exchange with a 9-year-old boy, Zachary Ro, during a rally held in Aurora, Colorado on Saturday. Zachary submitted a question for the Democratic presidential hopeful that quickly earned cheers and support from the room. Read by Colorado Secretary of State Jena Griswold, the question (which was submitted by fishbowl and, according to Griswold, selected randomly), said simply: "Thank you for being so brave. Would you help me tell the world I'm gay, too? I want to be brave like you."

Here is the clip, now going viral on Twitter.

"I don't think you need a lot of advice for me on bravery. You seem pretty strong to me," Buttigieg told the child who’d come to his rally with his parents. Audience members reportedly shouted “love means love” as Zachary came on and off the stage.

"It took me a long time to figure out how to tell even my best friend that I was gay,” Buttigieg stated, “let alone to go out there and tell the world and to see you willing to come to terms with who you are in a room full of 1,000 people... Thousands of people you've never met that's, that's really something." He went on to give the child some advice on leading by example and being brave.

"Just promise me you won't run for president until after I'm done because I think you might be strong competition,” Buttigieg added as a joke.

As Daily Kos covered last week, Buttigieg’s sexual orientation, in itself, does not make him the most radical or progressive candidate. In terms of policy proposals, he leans far more moderate than some of his competitors, including Sens. Bernie Sanders and Elizabeth Warren. Still, Buttigieg’s candidacy is historic. And for young people to see themselves represented on the campaign trail, it can be truly inspiring. Visibility is not the beginning and end of a candidacy, but it’s certainly powerful in its own right.

"It was exciting, and I felt really happy," Zachary told The Colorado Sun after the event.