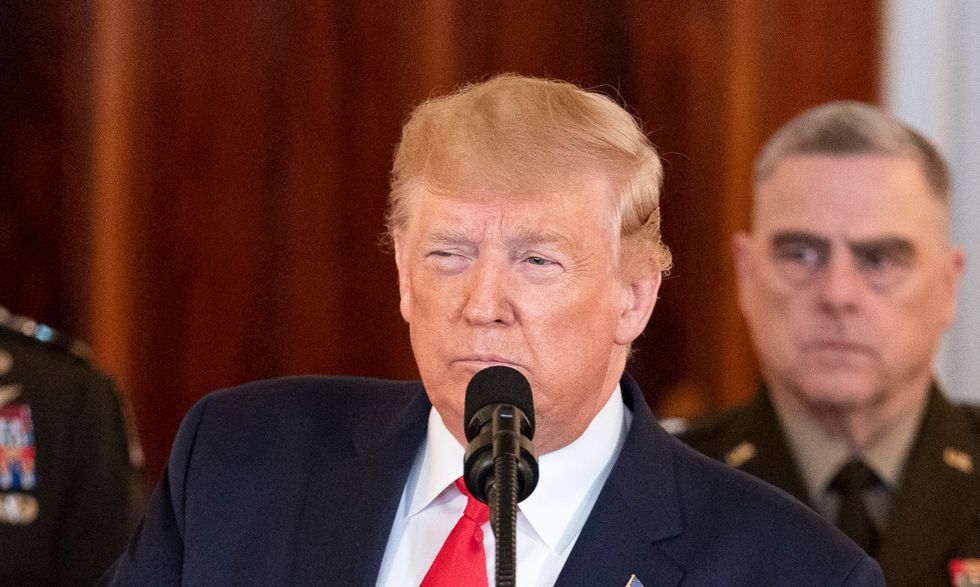 In a "bombshell" revelation that calls into question one of the Trump administration's stated justifications for assassinating Iranian Gen. Qasem Soleimani—a move that nearly sparked a region-wide military conflict—Iraqi intelligence officials told the New York Times that they believe ISIS, not an Iran-linked militia, was likely responsible for the Dec. 27 rocket attack that killed an American contractor at an airbase near Kirkuk, Iraq.

The Times reported Thursday that "Iraqi military and intelligence officials have raised doubts about who fired the rockets... saying they believe it is unlikely that the militia the United States blamed for the attack" was responsible.

"All the indications are that it was Daesh," Brigadier General Ahmed Adnan, the Iraqi chief of intelligence for the federal police at the K-1 air base, told the Times, using the Arabic acronym for ISIS. "We know Daesh's movements."

The Trump administration has not released a single piece of evidence showing that the Iraqi militia Khataib Hezbollah, which has ties to Iran, was responsible for the attack on K-1. The group has denied carrying out the attack.

The U.S. responded to the rocket attack days later with deadly airstrikes on Khataib Hezbollah targets in Iraq and Syria, setting off a dangerous escalatory spiral that brought Iran and the U.S. to the brink of war.

On Jan. 2, the U.S. assassinated Soleimani with a drone strike in Baghdad ordered by President Donald Trump. Following the assassination, which was widely condemned as an act of war, the U.S. Department of Defense issued a statement claiming without evidence that Soleimani "orchestrated attacks on coalition bases in Iraq over the last several months—including the attack on December 27th—culminating in the death and wounding of additional American and Iraqi personnel."

But Iraqi officials told the Times that "based on circumstantial evidence and long experience in the area where the attack took place," there is good reason to be skeptical about U.S. claims that Khataib Hezbollah was behind it.

The rockets were launched from a Sunni Muslim part of Kirkuk Province notorious for attacks by the Islamic State, a Sunni terrorist group, which would have made the area hostile territory for a Shiite militia like Khataib Hezbollah.

Khataib Hezbollah has not had a presence in Kirkuk Province since 2014.

The Islamic State, however, had carried out three attacks relatively close to the base in the 10 days before the attack on K-1. Iraqi intelligence officials sent reports to the Americans in November and December warning that ISIS intended to target K-1, an Iraqi air base in Kirkuk Province that is also used by American forces...

These facts all point to the Islamic State, Iraqi officials say.

"We as Iraqi forces cannot even come to this area unless we have a large force because it is not secure," Brig. Gen. Adnan said of the area from which the rocket attack was launched. "How could it be that someone who doesn't know the area could come here and find that firing position and launch an attack?"

The US almost started WWIII based on questionable evidence. After all of the violence in the Middle East followin… https://t.co/9XVY9tzwWt
— CODEPINK (@CODEPINK)1581023701.0

U.S. officials insisted to the Times that they have "solid evidence" showing that Khataib Hezbollah carried out the attack, but they have not released any of this evidence to the public or to Iraqi officials.

"We have requested the American side to share with us any information, any evidence, but they have not sent us any information," Lt. Gen. Muhammad al-Bayati, chief of staff for former Prime Minister Adel Abdul Mahdi, told the Times.

Ilan Goldenberg, Middle East security director at the Center for a New American Security think tank, tweeted that the U.S. Congress "must ask questions about this and get the intel."