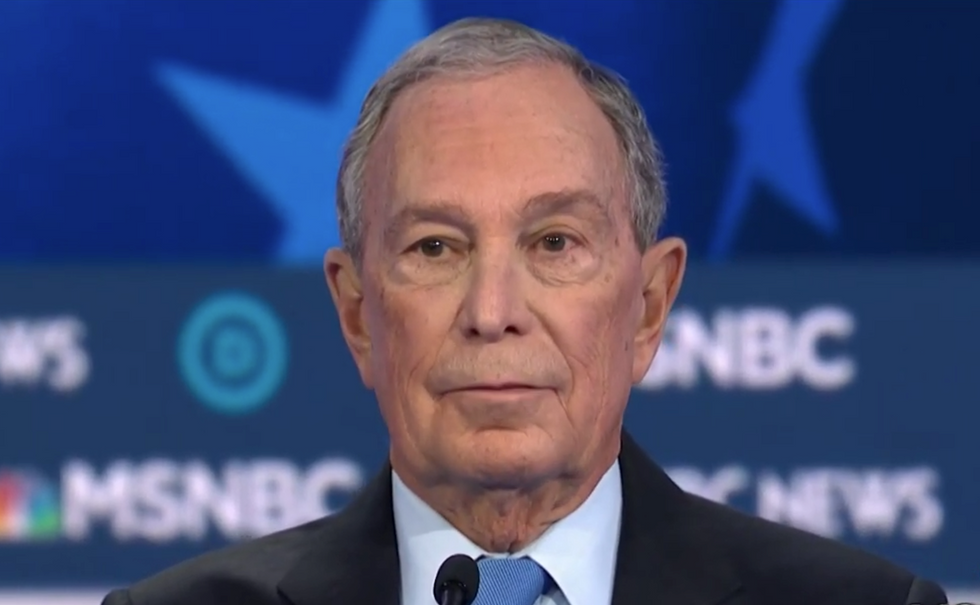 With a gargantuan fortune, a history of running the largest American city, and no shortage of self-confidence, Michael Bloomberg rocketed himself to become a commanding presence in the 2020 Democratic primary with a massive wave of ad spending in key states, posing a real threat to top candidates Joe Biden and Bernie Sanders. But after two dismal performances on the debate stage, Bloomberg's star seems to be falling — perhaps proving that even great wealth can't buy you charisma or a presidential nomination.

We shouldn't write any premature political obituaries, of course, as any number of unforeseen events can shake up a race. But it does appear that Bloomberg's sudden ascent may have been an overinflated bubble ready to pop as soon as he faced some real public scrutiny. And ironically, Bloomberg's position in the race may actually be having the opposite effect of his stated goal: thwarting Sanders's shot at the nomination.

"Bloomberg is in quite a lot of trouble," said poll analyst Nate Silver. "His national polls have stalled out or begun to reverse themselves. He's fallen to 11% in our CA polling average. In other Super Tuesday states, we aren't seeing the leads we saw pre-NV debate; it's a lot of stuff in the teens and low 20s."

Bloomberg needs to make a big splash on Super Tuesday and earn a large number of delegates to demonstrate that he has the strength to challenge Sanders's frontrunner status. If he makes a poor showing, there's likely no way he can recover.

And as Silver noted, it's hard to see how Bloomberg turns around his fortunes before that key date. He's not on the ballot in South Carolina's Saturday primary, where either Sanders or Biden is likely to claim victory and garner any resulting boost.

"It's not even clear what he wants to happen in SC. If Bernie wins, Bernie may open up a *very* formidable lead by Super Tuesday, and though Bloomberg might be 2nd (a) it's likely to be a distant 2nd and (b) there's much more evidence of a Bloomberg ceiling than a Bernie ceiling," said Silver. "If Biden wins SC, the race remains more open, but Biden will have a fairly clear claim to being the best alternative to Sanders and, per our projections, would likely finish comfortably ahead of Bloomberg in ST delegates. So Bloomberg might be in a fairly distant 3rd place."

Silver also noted that Bloomberg performed worst of all the candidates in the debates, according to FiveThirtyEight's polling. Coming on top of a truly catastrophic performance in the previous debate, which appeared to put a significant dent in his favorability numbers, this is a major blow. And a new poll from The Economist and YouGov found that Bloomberg leads the field when Democratic voters are asked which candidate they would be disappointed to see get the nomination, with 44 percent responding affirmatively in his case. Only 23 percent said they would be disappointed to see Sanders be the nominee.

"If one turns to polls for Super Tuesday states, Bloomberg is not beating Sanders; rather, he is taking 15-20 percent of the vote with no sign he can overtake Sanders," she wrote. "In the latest PPP North Carolina poll, Biden leads with 23 percent, followed by Sanders at 20 percent and Bloomberg at 17 percent. In the University of Houston’s Texas poll, Biden and Sanders are tied at 22 percent, Bloomberg is fourth behind Sen. Elizabeth Warren (D-Mass.) with 12 percent. In California, Bloomberg runs third or fourth. This is after hundreds of millions of dollars of advertising."

Since crossing the 15 percent threshold can provide candidates a boost in winning a state's delegates, Bloomberg could actually help Sanders by taking support from another candidate, like Biden, who could pose a more significant threat to the frontrunner.

"Remaining in the race only to give more embarrassing debate performances and divide up the non-Sanders vote would tarnish Bloomberg’s legacy and make him the Mr. Money Bags villain should Sanders get the nomination and lose to Trump," explained Rubin. "Bloomberg is savvy enough to know how to attain his goal — beating Trump — by means other than his own candidacy."