Bloomberg planning all-out media assault on Sanders ahead of Super Tuesday: 'The people versus the oligarch' 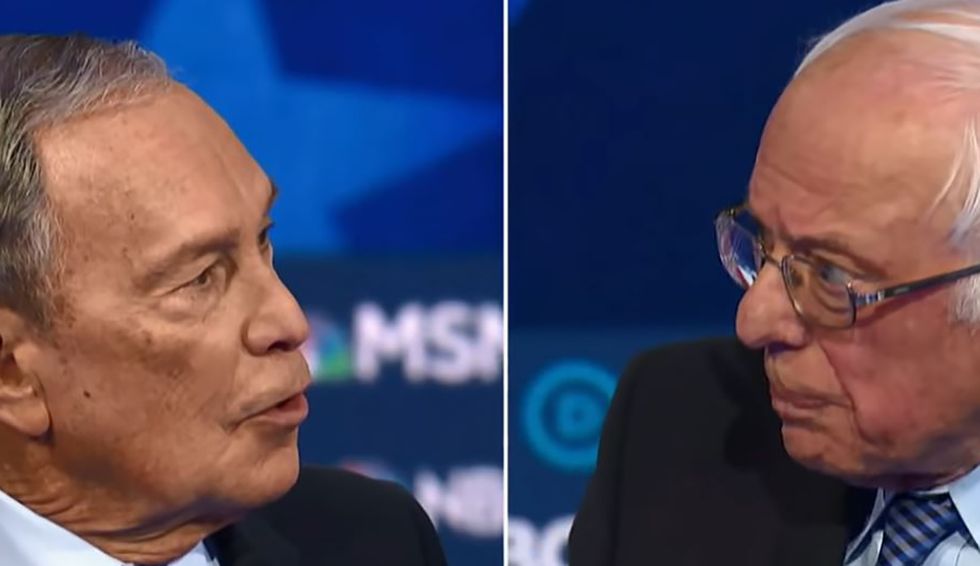 New reporting out Monday reveals that billionaire plutocrat Michael Bloomberg, the former New York City mayor whose record spending has propelled him into the top tier of the 2020 Democratic presidential primary race, is preparing a full-scale, "multipronged attack" on Sen. Bernie Sanders with a massive "media onslaught" against the Democratic frontrunner.

According to CNBC, which broke the story, Bloomberg's strategy will involve spending huge sums of his limitless money on digital ads, publishing opposition research, and pushing surrogates to appear on TV and write op-eds against the Vermont senator ahead of Super Tuesday.

"The Bloomberg machine turns its billions onto Sanders in a first test of what the general election will look like," tweeted The Hill's Sagaar Enjeti.

There it is. The Bloomberg machine turns its billions onto Sanders in a first test of what the general election wil… https://t.co/sZQY0atSCp
— Saagar Enjeti (@Saagar Enjeti) 1582570287.0

Dutch economist and Netherlands Labour Party member Maarten Wiedemeijer put it as a struggle between one of the world's richest men and the movement behind the Vermont senator.

"The people versus the oligarch," said Wiedemeijer.

That cash flow into the coffers of news networks and newspapers has created an uncomfortable situation for for-profit news outlets who expect to cover the billionaire—the spending appeared to result in more coverage, as Axios reported on February 20:

In the first six weeks of his campaign from early November to mid-December—when he was polling in the low single digits—Bloomberg had 24,754 articles written about him. That compared to 17,259 for Warren, 11,954 for Sanders, 5,242 for Buttigieg and 2,243 for Klobuchar.

CNBC reports the mayor has decided to focus all of his energy and bank account on the Vermont senator through the Super Tuesday contests on March 3, where 14 states are set to hold primaries.

On Monday, the Bloomberg campaign attempted to paint Sanders as a past ally of the National Rifle Association, a gun advocacy group that Bloomberg has fought for over a decade.

The attacks on Sanders, who has accused Bloomberg of trying to buy the Democratic nomination, will also attempt to highlight negative aspects of his record on race relations both as a congressman and senator, the sources said. This comes after Sanders, now seen as the Democratic front-runner, has taken aim at Bloomberg for his support of a policing policy known as stop-and-frisk that often targeted black and Latino people.

"This is a bold move for Bloomberg, given his history of both racist comments and racist policies," said Vox reporter German Lopez of the new strategy by the billionaire's campaign.

The news came two days after Joe Lockhart, a longtime Democratic strategist and former press secretary to former President Bill Clinton, in an opinion piece for CNN called on Bloomberg to take the frontrunner out.

New York magazine writer Eric Levitz suggested that a full-bore assault from Bloomberg could be just what the Sanders campaign needs to prepare for a general election contest with the incumbent, President Donald Trump.

"This will be a good test of the durability of Bernie's strength in polls against Trump," tweeted Levitz. "If Bloomberg's wall-to-wall character assassination campaign doesn't erase Bernie's advantage in those polls, no reason to think he can't hold strong in the general."