Billionaire Bloomberg said he released his tax returns as NYC mayor. That was a lie 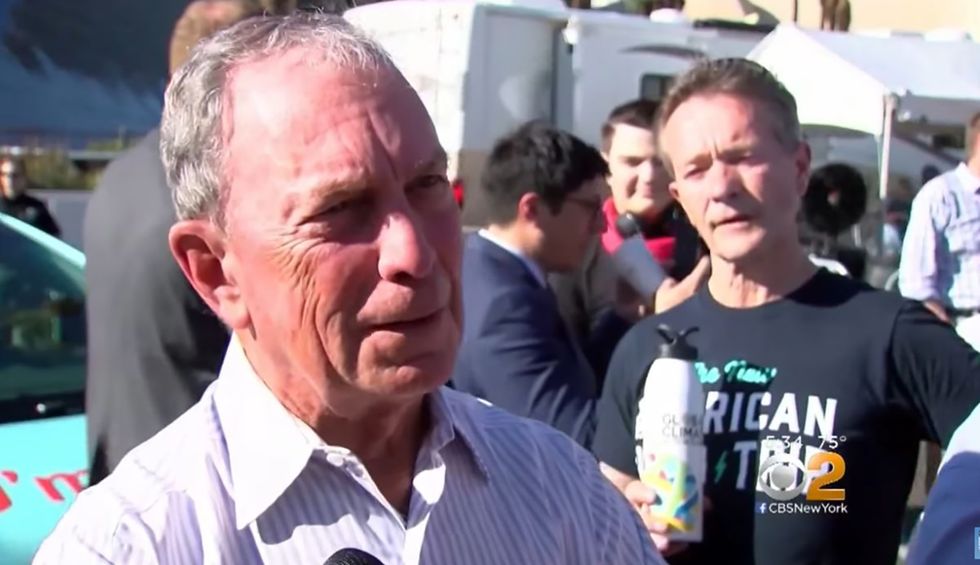 We speak with Bob Hennelly, an award-winning reporter for The Chief-Leader, who says that billionaire Michael Bloomberg lied during the past two Democratic presidential debates when he claimed he released his taxes while he was mayor of New York City. Hennelly covered Bloomberg during his time as mayor as a reporter for WNYC, New York’s main public radio station. In 2012, he had an exchange with Bloomberg after a press conference in which the then-mayor said he didn’t have to disclose his federal taxes. We hear that audio recording and discuss Bloomberg’s record.

AMY GOODMAN: This is Democracy Now! I’m Amy Goodman. Our next guest says billionaire Michael Bloomberg lied during last night’s Democratic presidential debate in South Carolina when he claimed he released his taxes while he was mayor of New York City.

MICHAEL BLOOMBERG: I got into this race only 10 or 12 weeks ago. We’ve been working on our tax returns. I’ve said they’ll be out. We probably have another couple weeks left to go. We’re doing it as fast as we can. We’ve complied with every single requirement for disclosure. And when I was mayor of New York, we had our tax returns out 12 years in a row.

MICHAEL BLOOMBERG: And we will do that in the White House.

AMY GOODMAN: That was Michael Bloomberg speaking last night in Charleston. He made the same claim during last week’s Democratic debate in Las Vegas, saying he had put out his tax return every year for 12 years in City Hall. Well, our next guest says he has the proverbial receipts to prove this is not true. Bob Hennelly is an award-winning reporter for The Chief-Leader. He covered billionaire Michael Bloomberg during his time as mayor, all three terms. At that time, Bob Hennelly was a reporter for WNYC, New York’s main public radio station. In 2012, he had this exchange with Bloomberg after a press conference.

BOB HENNELLY: Why won’t you disclose what you actually physically pay in terms of federal taxes?

MAYOR MICHAEL BLOOMBERG: There’s no reason to. We have categories, and I have a personal life. The accountants will tell you I pay 100% of my taxes. I don’t have tax shelters in the context that you would talk about it. I pay what I’m supposed to pay. And, you know, it’s — we earn money all around the world.

BOB HENNELLY: Well, it’s absolutely not true. And one of the things that, as a beat reporter — WNYC had been municipally owned, but we became a nonprofit. And we, every year, there was — a farcical disclosure event would occur on Third Avenue at Geller & Co., the accountant. And we would go into a hermetically sealed room, and then a stool ogre would stand over us, and we couldn’t actually make copies. And we were handed the tablet, which was like the equivalent of a Midwestern phonebook for a small city. And on each entry was not numbers, that you would assume with your tax form or my tax form, but letters in the alphabet, A through G. And G would symbolize more than $500,000. And everything was a G.

Now, why Democracy Now! is so essential is that this is the only place I can think of to come to actually play this tape, because what’s really scary, Amy — we know each other a long time — other reporters were with me in the room. This ritual was something we all groused about — New York Times, Wall Street Journal, Post, Daily News. And we all said, “There’s no disclosure here.”

In fact, during the period of time that he was mayor, I started focusing on the fact that he came in at $5 billion, and he wasn’t supposed to be active in Bloomberg LP, and strangely, automatically, it was over $20 billion by the time he left. And so, I thought, particularly in the circumstance of Occupy Wall Street, we needed to focus on how his wealth was structured. And what I noticed is that when he came in, there were like 40 offshore things — you know, Bloomberg Cayman Island LLC, those kinds of things, not necessarily something where he was a tax evasion, but just structuring of great wealth. So I took these conflict-of-interest forms to Jeffrey Sachs, respected professor, and he said, “Bob, this is a structure of great global wealth that is now beyond the ability of nation-states to hold accountable.”

And that was my aha moment to understand that human beings have a real problem with borders, right? You can be put in a cage. You can be killed trying to cross one. But wealth travels without a passport, without having making any apology, and the nations of the world now are begging and vying to draw that wealth, and will do anything just to have it parked for a while in their country. That’s part of this great building of wealth inequality and wealth concentration.

AMY GOODMAN: So, what did Mayor Bloomberg say when you pressed him on his offshore investments?

BOB HENNELLY: He was like, “I have businesses all over the world,” like it was such a nonstarter. It was basically, you know, his attitude was, “This isn’t tax avoidance. This isn’t transfer pricing,” which is a gimmick that’s used. “I do business around the world, and it’s required that you have licenses in those places to do business.” But without the numbers, without the receipts, without the tax return, it’s impossible. You know, and this was happening, by the way, when he was saying that we needed to repeal the Bush tax cuts and then everyone should pay more in taxes across the board in a sense of shared national sacrifice. So it seemed fair to ask him, “Well, what are you paying?” And he refused to do it.

He also said, and particularly his aides would say, “We can’t release this because this would have a negative business consequence.” And this will echo to people this thing we’ve lived through with Donald Trump, where “Is it a private business? Is it a presidency?” because he put the business of preserving his confidentiality and the value of his assets for a competitive advantage over the important, transcendent value of civic disclosure. And civic disclosure is really just about humbling yourself because you want to be a public servant.

AMY GOODMAN: So, Bob Hennelly, talk about how Michael Bloomberg made his billions. He didn’t inherit this wealth.

BOB HENNELLY: No. And that’s the most endearing part of the story, is, you know, he’s a self-made individual, parked cars to get through college, came to New York City, got a great job with Salomon Brothers, a Wall Street firm, got laid off after several years there, got a $10 million parachute — which is nice. And out of that he created the Bloomberg LP. What is that, really? There’s these really smart machines, terminals, that you have to have for real-time pricing for assets. So, if you want to move a bunch of foreclosed homes or mortgage-backed securities, or whatever you want to move through the Cayman Islands, you’ve got to have one of these terminals. So, these are all over the world. And it provides real-time information for all these transactions. So, indeed, the financialization of the planet, the proliferation of debt, all the things we’ve seen that are the engines of the concentration of wealth, the global wealth machine, were facilitated by Bloomberg terminals.

AMY GOODMAN: Before we go, I wanted to ask you about stop-and-frisk. The operative word “5 million,” that’s the number of stop-and-frisks that’s estimated during the Bloomberg three terms.

AMY GOODMAN: Right. No, it’s not. It’s the number — because many individuals stopped many times.

AMY GOODMAN: They grew up being stopped. But we only have a minute, and I wanted to ask you about this. Untold suffering of people, and they weren’t quiet.

AMY GOODMAN: I mean, thousands and thousands of people marched in the streets, right to —

BOB HENNELLY: We were there.

AMY GOODMAN: — Mayor Bloomberg’s mansion. We were covering it. But what about the financial cost to the city?

BOB HENNELLY: Right. Well, one of the things that happened was the tort claims. And that’s something where something happens to you, that you’re assaulted, the police have some kind of incident of misconduct. The city of New York taxpayers paid a billion dollars over those 12 years to satisfy bad police behavior claims.

AMY GOODMAN: You mean lawsuits because people were —

BOB HENNELLY: And I have to also say, in terms of cost —

AMY GOODMAN: We have 10 seconds.

BOB HENNELLY: — these were ruined lives, too. These were lost scholarships, lost relationships, lives totally destroyed by this process.

AMY GOODMAN: And $1 billion in settlements that the city paid out?

BOB HENNELLY: That’s right, not spent on the people, but on these claims.

AMY GOODMAN: Bob Hennelly, I want to thank you for being with us. We’re going to do Part 2, and we’ll post it at democracynow.org. Bob Hennelly is the award-winning reporter who’s now with The Chief-Leader.

Tune in Tuesday for our Super Tuesday live broadcast with The Intercept from 7:00 Eastern time in the evening to midnight.

And Democracy Now! has a number of job openings here in our New York City offices, from our newsroom producer and fellow to our outreach and development teams. Go to democracynow.org for information. I’m Amy Goodman. This is Democracy Now! Thanks so much for joining us.