Biden's 'firewall' may be crumbling as Sanders soars in key states 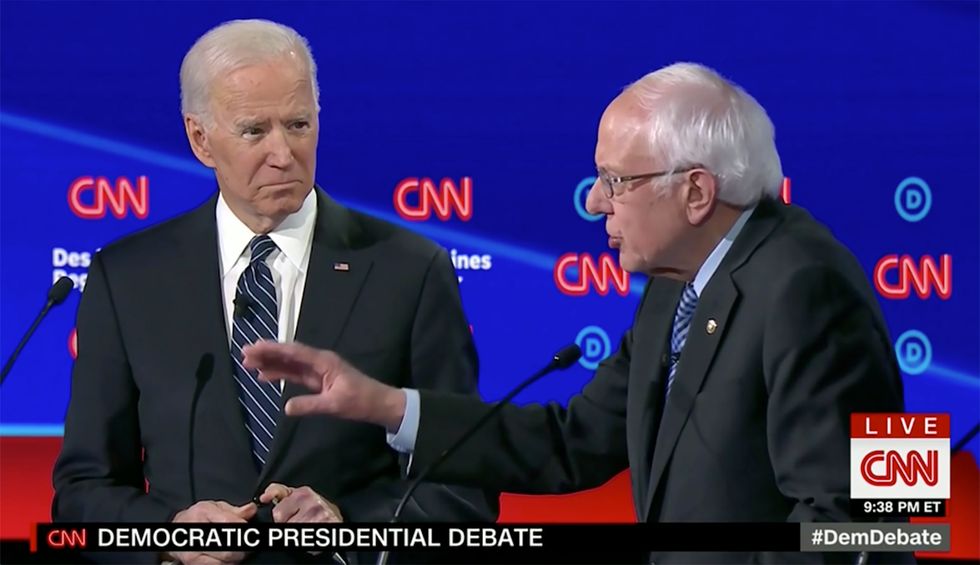 Former Vice President Joe Biden's support in South Carolina plummeted in a poll released days ahead of the state's crucial primary on Saturday, which Biden previously boasted would be his "firewall."

Biden, who led South Carolina polls by nearly 30% during much of the campaign, saw his margin of support fall to five points in February, according to a new CBS News/YouGov poll. Biden's support among black voters, who make up the majority of Democratic voters in the Palmetto State, fell from 54% to 35%.

The latest survey shows Biden with 28% support and Sen. Bernie Sanders of Vermont, the early Democratic frontrunner, at 23%. Billionaire former hedge fund manager Tom Steyer is in third place with 18% after spending millions to flood the South Carolina airwaves with advertisements. Sen. Elizabeth Warren of Massachusetts trails with 12%, followed by former South Bend, Indiana, mayor Pete Buttigieg at 10% and Sen. Amy Klobuchar at 4%. The poll was conducted before Sanders' resounding victory in the Nevada caucuses last weekend.

Biden, who was long considered the Democratic frontrunner before finishing fourth in Iowa and fifth in New Hampshire, vowed that South Carolina would be his "firewall" before he finished more than 25 points behind Sanders in Nevada. With his numbers badly sagging in both national and state polling after his poor performances in early contests, Biden denied he ever said that in an interview with CBS News on Sunday.

Biden complained during the interview that Steyer's spending has drained his support.

"What's happening is you have Steyer spending hundreds of millions, tens of thousands of dollars, millions of dollars, out campaigning there," Biden said. "And so I think a lot is happening in terms of the amount of money being spent by the billionaires to try to cut into the African-American vote."

Biden could get a crucial boost ahead of the primary with Rep. James Clyburn, the No. 3 Democrat in the House, planning to endorse him later this week, according to Politico. The influential South Carolina Democrat has not said who he plans to vote for but pushed back against criticism aimed at Sanders ahead of the state's vote.

"Anybody who refers himself as democratic socialist" has always faced "really dire consequences throughout South Carolina," Clyburn said when asked about the criticism on NBC News, before adding that Sanders has a lot to offer to voters in the state.

Clyburn's comments came as Sanders continued to rise in the polls after his win in Nevada.

A new poll by the University of Wisconsin, the Madison Election Research Center, and YouGov in the critical swing states of Wisconsin, Michigan and Pennsylvania showed Sanders leading in all three states, which swung the 2016 election to President Donald Trump by a combined 78,000 votes.

Sanders leads the pack in Michigan with 25%, followed by Biden at 16%, former New York Mayor Mike Bloomberg and Warren tied at 13%, and Buttigieg at 11%.

Sanders has an even bigger margin in Wisconsin, where he leads with 30%, followed by an effective four-way tie for second place: Biden and Bloomberg are at 13%, Buttigieg and Warren at 12%.

Sanders also leads in Pennsylvania, although by a smaller margin. He has 25% support in the poll, followed by Biden (who was born in the state) at 20%, Bloomberg at 19% and Buttigieg at 12%.

"The evidence doesn't back Democrats' panic that Bernie can't win," wrote Axios co-founder Jim VandeHei, noting that Sanders also outperforms every other Democrat against Trump in a recent Texas poll. "Virtually every national and swing state poll shows Sanders tied with or beating President Trump. And, unlike every rival, he has a huge base of fervent, unshakable supporters he can only grow."

Longtime journalist Peter Hamby argued that "bed-wetting" Democrats are looking at Sanders' rise all wrong in an article for Vanity Fair.

"Instead of asking if Sanders is unelectable, ask another question: What if Sanders is actually the MOST electable Democrat?" he wrote. "In the age of Trump, hyper-partisanship, institutional distrust, and social media, Sanders could be examined as a candidate almost custom-built to go head-to-head with Trump this year."

"That's why some Trump advisers are worried," he added. "Sanders's raw economic populism seems like a worthy match for Trump in the Midwest, where he consistently, if narrowly, outpolls the president."