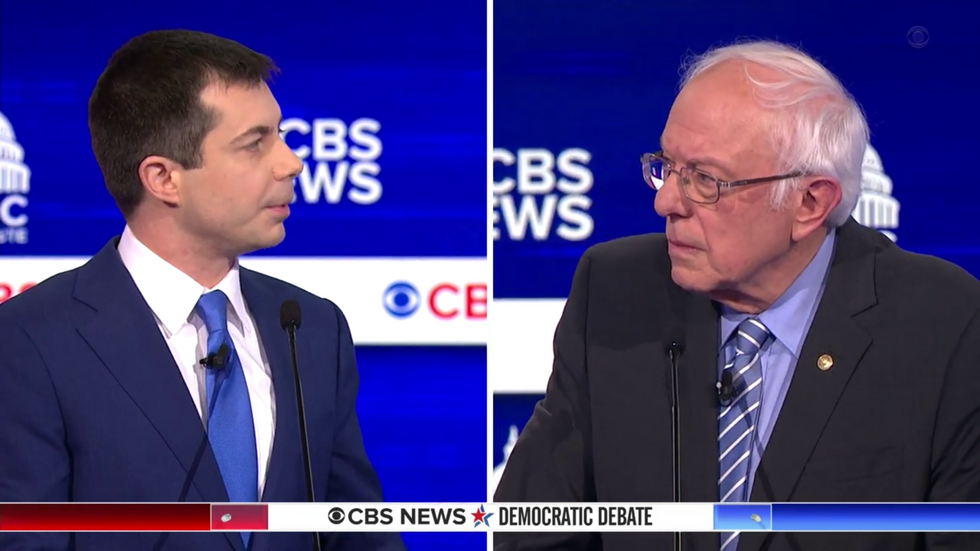 The Democratic primary debate in Charleston, South Carolina, on Tuesday night was the last debate before Super Tuesday next week — and possibly the last debate of the primary cycle. So it's no wonder that the candidates came on stage a little punchy. It was as if they'd all watched Sen. Elizabeth Warren whip billionaire Mike Bloomberg last week and decided that it was time to bite her style. The melee that resulted was less elegant than Warren's solo martial-arts display we witnessed last week, but in truth it was no less watchable for the messiness.

Polling leader Sen. Bernie Sanders has largely avoided much serious criticism in previous debates, largely because he only recently became the clear frontrunner. That streak of fortune ended Tuesday, as his competitors (not "contestants", as Bloomberg deemed them) decided to risk the wrath of the snake-emoji wielders and launch substantive attacks at the senator from Vermont.

Former South Bend, Indiana, mayor Pete Buttigieg landed a number of blows on Sanders, claiming that as the Democratic nominee Sanders would suppress turnout for down-ballot Democrats, who "are running away from your platform as fast as they possibly can."

Later, Buttigieg pointed out that Sanders has so far opposed eliminating the Senate filibuster so that Democrats wouldn't need a 60-vote majority to pass legislation: "How are we going to deliver a revolution if you won't even support a rule change?"

Later, referring to controversy over Sanders's past comments on Cuba and other communist nations, Buttigieg declared that politics must be forward-looking and that Democrats are "not going to win by reliving the Cold War." That comment was clearly meant to draw attention to the 40-year age difference between Sanders and Buttigieg, who was a little kid during the years of Sanders' life that are coming under scrutiny.

Warren, who has mostly been gloves off with Sanders, also landed an early blow, arguing that as much as she agrees with Sanders on policy questions, she feels she would be "a better president," suggesting she is more willing to do the actual work of making things happen.

She pointed out that, unlike Sanders, she had detailed a funding mechanism for Medicare for All earlier in the campaign: "I dug in. I did the work — and then Bernie's team trashed me for it."

The result was that perhaps for the first time (most of these debates blur together, to be fair), Sanders appeared visibly unnerved. In the second half of the debate, when the moderators, as expected, questioned Sanders on his previous comments praising some aspects of Fidel Castro's Cuban regime — such as health care and education — Sanders seemed a bit defensive. When he said that "Cuba made progress on education", some in the crowd booed him. He snarkily retorted, "Really?"

No doubt Sanders is right that these questions are complicated and nuance would be more welcome. But his prickly, shouty presentation sometimes undercuts the substance of the argument. Appearing to tell voters that they don't understand something is confusing at best, and offensive at worst.

Bloomberg had a somewhat better showing than he did last week, but of course that's the lowest bar ever to clear. It was still a dismal performance, as he swung between lecturing the moderators in a snotty tone and rolling his eyes at Warren's legitimate criticisms.

The one thing that Bloomberg had going for him is that, unlike last week, he managed to choke out a coherent story for why he should be the nominee. (He also kept getting weird cheers from the audience, which attracted lots of online suspicion, thanks to his habit of purchasing such "organic" support.) Unfortunately, that argument was basically that he intends to buy the general election after he's done buying the nomination, as he made clear when he told Warren that one reason people should vote for him is because, "I have the resources."

Moreover, Bloomberg made sure to convey that he believes Democratic voters should be grateful rather than concerned that moneyed interests are consuming our politics: "All of the new Democrats that came in, put Nancy Pelosi in charge, and gave the Congress the ability to control this president, I bought —"

He then caught himself and said, "I, I got them." Which is only slightly better than what his behind-closed-doors-with-friends-and-martinis brain wanted to say.

Of course, the problem with relying on billionaires to purchase your politicians for you is that it leaves our democracy up to their personal whims. Sometimes that whim is that they should be handed the presidency and thanked for their generosity in taking the highest office in the land, which is a perfect illustration of the problem.

Bloomberg also came across as a chauvinist pig when Warren, as she did last debate, went after him for the multiple lawsuits he's settled with women suing him for gender discrimination and sexual harassment. Warren accused him of telling an employee to "kill it" when she told him she was pregnant, a charge Bloomberg flatly denied — in a tone that implied that his accuser was either lying or crazy.

But Warren didn't just pull this story out of thin air. It was documented in court records for a lawsuit that Bloomberg eventually settled out of court, and was corroborated by a third party, as documented by the Washington Post.

More to the point, Bloomberg's behavior towards Warren — eye-rolling, talking at her as if she were a child, demanding cookies for deciding his own innocence after a self-review — makes it seem all too believable that he treats women who work for him, and over whom he has power, even worse.

But Bloomberg keeps hanging in there, despite being really bad at this, because all his expensive campaign team has to do is cut a few moments from the debate where he didn't sound all that bad, put some soaring music behind it and blanket the airwaves with it, so that millions more people see the ads than ever saw the debate.

Warren and Buttigieg both had excellent debates, if only because both made coherent, compelling cases that they would make more electable alternatives than either Sanders or Bloomberg.

The rest of the stage, however, had a bad night. Sen. Amy Klobuchar of Minnesota flailed some more, not really tripping over herself but not making an impression. Billionaire Tom Steyer mostly just played the role of the less villainous guy who bought his spot on stage. And former Vice President Joe Biden, even though he swore he was going to win South Carolina early on in the debate, spent most of the night projecting an unruly anger and shouting at the other candidates, even when, as in an exchange with Klobuchar about preventing domestic violence, he agreed with them.

Will any of this matter? Sanders and Bloomberg both took it on the nose, coming across as cranky, irritable and defensive. For Bloomberg, his support is built entirely on misleading ads, so there's a good chance this undermines him now that people are actually tuning in.

For Sanders, however, it might be a matter of too little, too late. He has considerable momentum going into Super Tuesday, and, as unpleasant as it might be to contemplate the 2020 election turning into a rehash of the Cold War, the fact is that such considerations aren't salient enough to deter primary voters in the here and now. None of the criticisms of Sanders cut to the bone, even if he didn't react well. So it's quite likely that his opponents did little if anything to slow Sanders down on his path to the Democratic nomination.