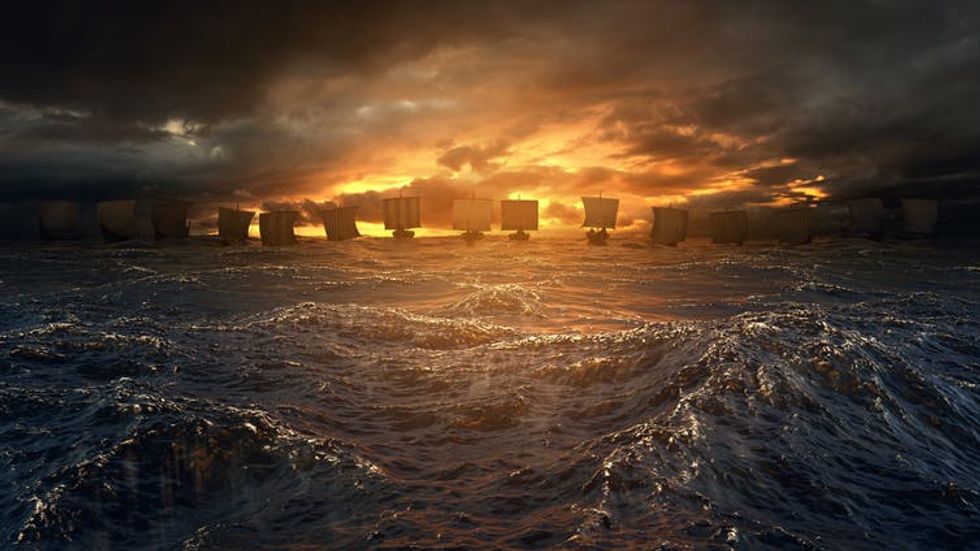 Vikings are often seen as heathen marauders mercilessly targeting Christian churches and killing defenceless monks. But this is only part of their story. The Vikings played a key role in spreading Christianity, too.

Norse mythology has long captured the popular imagination and many today have heard stories about the pagan gods, particularly Odin, Thor and Loki, recently reimagined in Marvel’s comic books and movies. Some now even follow reconstructed versions of these beliefs, known as Ásatrú (the religion of the Aesir).

Our main source for this mythology, the Prose Edda, was written by a 13th-century Christian, the Icelandic politician Snorri Sturluson. Scandinavia converted to Christianity later than many parts of Europe, but this process is still an important part of the Vikings’ real story. Indeed, there are fascinating works of Norse literature with a Christian theme, including sagas of bishops and saints.

It would be wrong to minimise Viking violence, but raiding – hit and run attacks for plunder – in the medieval period was not confined to these Scandinavian seafarers. The Irish annals, such as the Annals of Ulster, record far more attacks by Irishmen on other Irishmen, including the raiding and burning of churches, than attacks by Scandinavians.

An ideological clash is one suggested cause of the “Viking Age”. This line of thinking suggests that pagan Scandinavians sought to avenge Christian attacks, such as the Frankish emperor Charlemagne’s invasion of Saxony from 772AD to 804AD. This 30-year conflict involved forced mass baptism, the death penalty for “heathen practices” and included the execution of 4,500 Saxon rebels at Verden in 782AD.

It seems more likely, however, that Christian monasteries were initially targeted because they were poorly defended and contained portable wealth in the form of metalwork and people. Settling in richer Christian lands also offered better prospects for some than remaining in resource-poor Scandinavia.

The rise of Christianity

The conversion of Scandinavia was gradual with Christian missionaries preaching intermittently in Scandinavia from the eighth century. While there was some resistance, Christianity and Norse paganism were not always fundamentally opposed. A 10th-century soapstone mould from Trendgården in Jutland, Denmark, allowed the casting of metal Thor’s hammer amulets alongside crosses. The same craftsman clearly catered for both pagans and Christians.

The first Scandinavian king to be converted was the Danish exile Harald Klak. He was baptised in 826AD with the Carolingian emperor Louis the Pious as his sponsor, in exchange for imperial support for an (albeit unsuccessful) attempt to regain his throne.

Guthrum, a king from the Viking Great Army which attacked England in the ninth century, was also baptised as part of his agreement following defeat by the West Saxon king Alfred “the Great” in 878AD. Indeed, coming into contact with Christian kingdoms which were more politically centralised arguably led to greater unification of the Scandinavian realms.

Viking homes were stranger than fiction: portals to the dead, magical artefacts and 'slaves'

One of the most significant turning points in the Christianisation of Scandinavia was the conversion of the Danish king Harald Bluetooth in the 960s. Bluetooth technology is named after Harald because he united disparate parts of Denmark, while the technology unites communication devices.

Harald proudly proclaimed on the now iconic Jelling stone, an impressive monument with a runic inscription, that he “made the Danes Christian”. And this connection between kingship and Christianity continued.

Norway was converted largely due to two of its kings: Olaf Tryggvason and Olaf Haraldsson. The latter was canonised shortly after his death in battle in 1030AD, becoming Scandinavia’s first native saint.

Future Norwegian kings benefited from their association with Olaf Haraldsson, who became Norway’s patron saint. Other royal Scandinavian saints would follow, notably Erik of Sweden and Knud the Holy of Denmark. The Norse earldom of Orkney also produced a martyr from its ruling family: St Magnus, who was killed in around 1116 in a dynastic squabble.

The 2018 Danish Eurovision entry (Rasmussen’s song Higher Ground) portrays Magnus as a pacifist viking refusing to fight. Saga sources do suggest that Magnus refused on one occasion to raid with the Norwegian king and fled from the fleet, but his career was not without violence.

Scandinavians who settled abroad in Christian lands were also converted to the dominant religion. While Scandinavian settlers initially buried their dead in traditional pagan ways, they soon adopted the customs of those living around them. And their settlements became part of the political and cultural makeup of their host societies.

Some of the most celebrated pieces of medieval Irish ecclesiastical art were likely made by Hiberno-Scandinavian craftsmen from Viking-founded towns like Dublin. These objects also feature stylistic elements which had spread from the Scandinavian homelands.

For example, the 11th-century Clonmacnoise crozier is decorated in the Scandinavian art style of Ringerike, with snake-like animals in figure-of-eight patterns. Clonmacnoise in County Offaly, associated with the sixth-century St Ciaran, is one of Ireland’s oldest and most important ecclesiastical sites. And the ancestors of these craftsmen might have been the very raiders who had attacked Irish churches.

Even Scandinavian settlers in the remote islands of the North Atlantic joined the European mainstream with some enthusiasm. Partly due to pressure from Norway, Iceland officially converted to Christianity in the year 1000. Following consultation at their national assembly (the Alþing) it was decided that the country would convert but that some pagan practices would still be tolerated.

The settlements on Greenland eventually failed in the 14th and 15th centuries, but even when the inhabitants were starving they still devoted precious resources to importing luxury goods for the church, including wine and vestments.

Scandinavians also joined the Crusades; now they were the Christians attacking the so-called heathens. The Norwegian king Sigurd “Jerusalem-farer” – named for his visit to the Holy Land – was, in fact, the first European king to participate in the Crusades personally, making a journey from 1108 to 1111, a short while after the First Crusade culminated in the Christian reoccupation of Jerusalem in 1099.

Crusading was, after all, not so different from Viking raiding, but this time the killing and looting had Christian backing. Instead of an afterlife of feasting in Valhalla as a reward for dying in battle, those who died on Crusade would go straight to Heaven.

Indeed, the Viking world was as much populated by missionary kings, bishops and saints as it was by raiders, gods and giants.