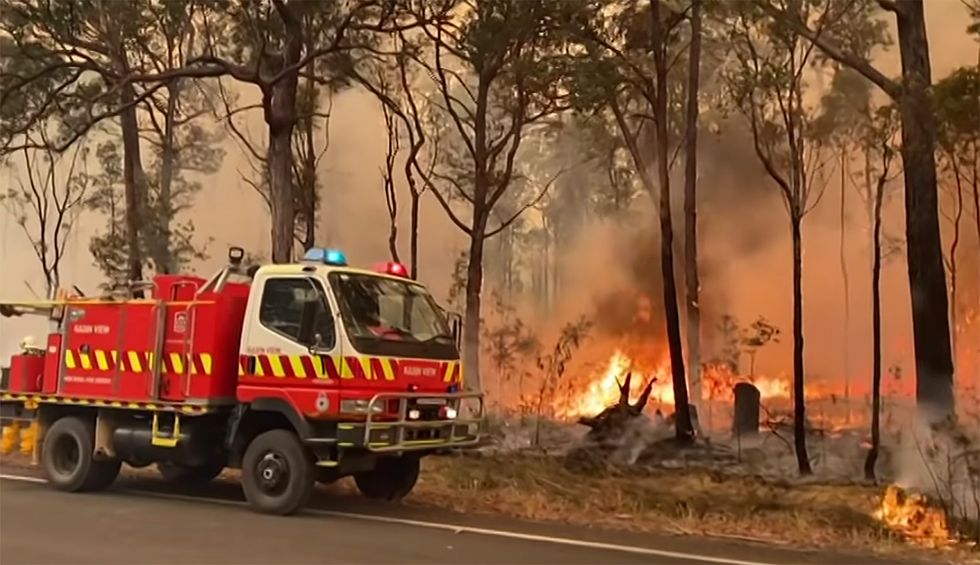 The death toll from still uncontrolled brush fires in Australia is now at least 18, with many more missing, thousands waiting on beaches for evacuation, and an area the size of Belgium actively burning. Over 1,000 homes have been destroyed, along with over half a billion animals, as Australia’s unique wildlife faces an extinction-level event. With more than 200 fires burning, fresh blazes being sparked by dry lightning storms that are triggered by the rising smoke, and continuing days of roaring winds and excessive heat ahead, it’s unclear when the fires will be brought under control. The extent and severity of wildfires in Australia is such that they are now casting a pall of smoke over New Zealand, 1,200 miles to the east.

The BBC describes a mass exodus from New South Wales, with the few highways still open in the area clogged with escaping vehicles as walls of flame roar up over 200 feet beneath a cloud of smoke the size of Europe. The Washington Post reports that tourists have been ordered out of a large area, while the Royal Australian Navy prepares to rescue both residents and tourists who have been stranded on beaches with limited supplies, or even waded into the sea to escape overwhelming heat. Some evacuations are already underway, but people waiting on the sand may still be trapped for some time, as naval vessels aren’t expected to begin operations until Friday or Saturday. Some 4,000 people are trapped in Victoria alone.

Triggering the fires are weeks of record heat, dryness, and high winds. December 2019 was one of the two hottest months on record, and it ended the driest year in the nation’s history. On Monday, every single state in Australia registered temperatures above 104 degrees Fahrenheit. Just weeks ago, Australia recorded its hottest day ever. All of that has contributed to a fire season that has emerged early and on an unprecedented scale.

This is the climate crisis in its most explicit, visible, and destructive form. Australia has always been a dry land, where brush fires are a common threat. But the climate crisis has tipped the balance, throwing the entire island continent into a spiral of disaster.

As the BBC reports, residents across the nation are pushing back against the government there for it’s long-standing support of coal. Australia is by far the world’s largest coal exporter, and those sales are a big factor in the country’s economic. However, the price for that support of coal is coming home to Australia in smoke-filled skies and a flame-ravaged landscapes. One woman confronted Prime Minister Scott Morrison, shouting, "What about the people who are dead, prime minister? What about the people who have nowhere to live?" as Morrison was hustled away. Morrison’s party has operated under the pretense that Australia is “mostly” meeting its own goals for controlling the climate crisis and behaving “better than most countries” while ignoring the fact that a third of the world’s coal exports come from Australia.

Another issue that’s making evacuation and sheltering more difficult is the fact that Australians rarely carry much cash. The use of smart cards and phone-based transactions is nearly universal. But the fires mean that power lines and telecommunications are out, leaving banks and scanners nonfunctional, a major issue for those seeking to buy gas or obtain lodging as they flee the fires.

While Australian politicians have been able to ignore the effects of their policies so far, that might be a bit tougher at this point. Not only are whole states on the move, but the air quality in the capital Canberra on Thursday was rated the worst of any major city in the world.

This the view from the top of the Tasman Glacier NZ today - whole South island experiencing bushfire clouds. We can… https://t.co/YOZiUZ5asn
— Miss Roho (@Miss Roho) 1577876676.0