Trump team titans spotlight: Former Florida AG Pam Bondi can grift with the best of them 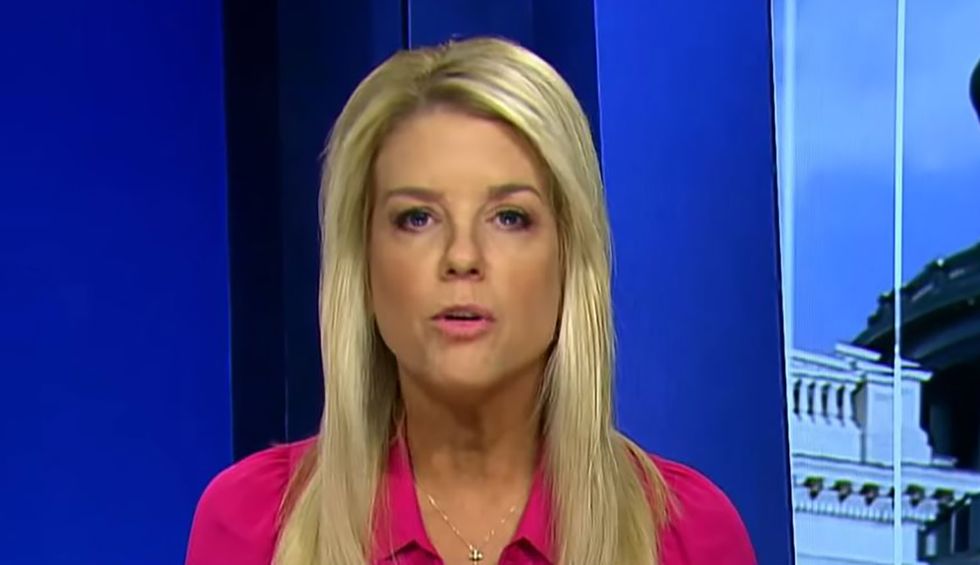 Birds of a feather will gather together.

A man is known by the company he keeps. The make-up of Team Trump is known, and as this is written, the trial is under way and by the time it sees the light of day, may already be over. Nonetheless, is not too late to admire one of the almost members of the Trump defense team, two of the well-known members and draw attention to one member who has been sadly overlooked. It is not that she has not had as illustrious a career as her colleagues. It is just that it is slightly less newsworthy.

The almost member of the defense team is, of course, Rudy Giuliani. He has gone around the world at great personal sacrifice in order to advance the Trump interests by getting dirt on the Bidens, and getting rid of Marie Yovanovitch, the former U.S. Ambassador to the Ukraine.

In all those efforts he has been single minded, always bearing the interests of the Trump foremost in his mind. Nonetheless, on a personal level, Rudy wanted nothing more than to have his name and face forever implanted on the impeachment proceedings by being a highly visible part of the defense team. Although he had, in the past, made history by being the only New York mayor to announce at a press conference, that he was divorcing his wife, an announcement that was as much news to her as to the rest of the world, that feat would not have held a candle, when his obituary is written, to having been a part of the team that was defending a man who was not only the most corrupt but also the dumbest president to have ever lived in the White House. Rudy really wanted to ride into posterity on the back of the Trump. It was not to be.

Among others, the defense team includes Alan Dershowitz and Ken Starr. Alan is an excellent choice since he was one of the lawyers who enabled the billionaire pedophile and good friend, Jeffrey Epstein, to avoid prison time for his now famous sexual escapades. Epstein had faced multiple counts of soliciting and trafficking underage girls in Florida, but thanks to the able defense of Alan and others, he was sentenced to 13 months of house arrest. Alan was assisted in that highly successful effort by another member of the Trump team, Ken Starr. Following his participation in the Epstein case, Ken went on to still more illustrious achievements. In 2011 he was named president of Baylor University and in 2016 he was kicked out for failing to respond appropriately to reports that football players at Baptist Baylor University had been convicted of sexual assaults.

Being among such successful defenders and enablers of men accused of sexual criminal activities, it is no surprise that she would go unnoticed. It’s not fair. She is just as exemplary as they—I refer to Pam Bondi.

Pam was the former attorney general for the state of Florida. When she was running for reelection to that post in 2013, she accepted a $25,000 check for her campaign from the Donald J. Trump Charitable Foundation. (On December 19, 2019 a suit against the foundation for using its money for, among other things, political purposes to further the Trump’s presidential pursuit, was settled.)

Following receipt of the gift from the foundation, Pam made the carefully considered decision not to sue Trump University on behalf of Florida citizens who claimed the university had swindled them.

Among her many notable Trump-like activities, Pam was active in taking steps to make it more difficult for voting rights to be restored to Florida ex-felons, repeatedly appealed federal court rulings against same-sex marriage bans until the U.S. Supreme Court definitively invalidated such prohibitions, and joined a lawsuit opposing the clean-up of the Chesapeake Bay, a bay that is several hundred miles from Tallahassee.

Another notable act occurred when she was running for reelection as attorney general for the state of Florida. Marshall Lee Gore had been sentenced to death in Florida following his conviction for a vicious murder and rape. His execution was twice postponed but finally scheduled for September 10, 2014. It turned out that was the date that Pam, who was running for re-election, had scheduled her “hometown campaign kickoff” at her South Tampa home. Understandably, she did not want an execution to take away from the excitement of her day. Accordingly, she asked the governor’s office to postpone the execution. Her request was granted. Mr. Scott was put to death October 1, 2014. Ms. Bondi’s fundraiser went off without a hitch. She was reelected to a second term as attorney general of Florida the following month.

Pam is a great addition to the Trump defense team. She will have no trouble fitting in. Trump, if no one else, should be grateful for her participation.