Tim Robbins: Bernie Sanders is the best shot we have to defeat Donald Trump 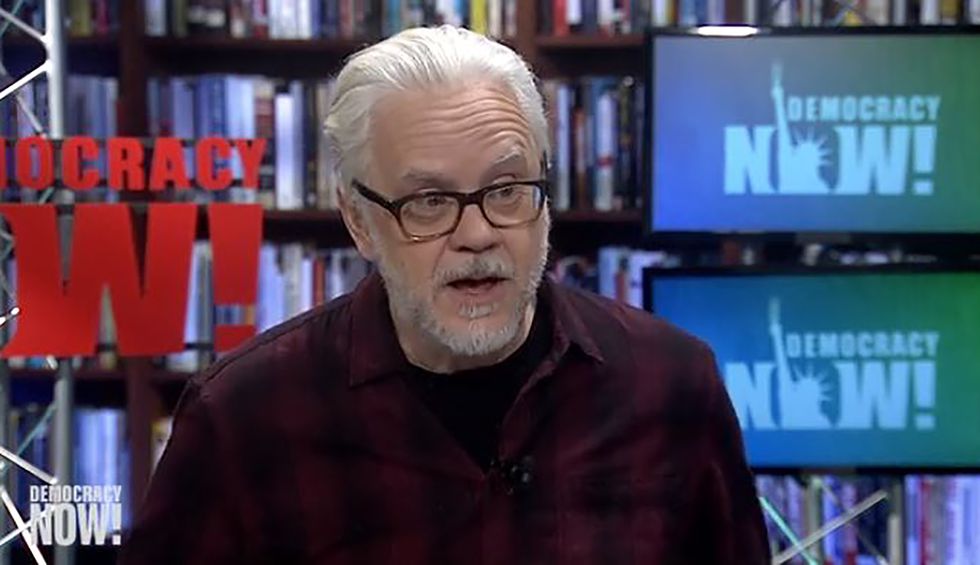 We continue our conversation with Academy Award-winning actor and director Tim Robbins, whose recent projects include the new film “Dark Waters” and a play about immigration called “The New Colossus.” He recently endorsed Vermont senator and Democratic candidate Bernie Sanders for president. “I believe he is the only one of them that can defeat Trump,” Robbins says.

AMY GOODMAN: We’re going to break and then come back to another journey you recently took, starring in Dark Waters, but I wanted to ask about your recent endorsement of Bernie Sanders. I don’t know if a lot of people heard about it, although there was a massive rally in California. What? AOC was there.

AMY GOODMAN: Of course, Bernie Sanders, Cornel West. How many people would you say were at this rally?

AMY GOODMAN: So this isn’t so much about you as, of course, about him and the erasing of Bernie Sanders that the corporate media does. How many — was there huge risers with cameras?

TIM ROBBINS: There were cameras.

AMY GOODMAN: I mean, tens of thousands of people?

TIM ROBBINS: There were cameras, and someone has it on tape, yeah. I know you can find it on YouTube, if you Google it.

AMY GOODMAN: Not getting much coverage.

TIM ROBBINS: No, and — but that’s par for the course. You know, the reason why I support Bernie is because, despite all of this, he still has immense numbers. He’s leading in the polls, despite being erased or ignored. And I believe he is the only one of them that can defeat Trump. I truly believe that he is the best shot we have of getting rid of this guy. The centrist Democrats have run with a strategy, for years, to try to appeal to suburban housewives that might be conservative. If we get a few of those votes, we’ll shift the focus, and we’ll be able to win the election. It didn’t work.

AMY GOODMAN: They may not be so conservative.

TIM ROBBINS: Well, yeah, maybe not. But here’s the thing. It didn’t work for Gore, didn’t work for Kerry, didn’t work for Clinton. Obama won, because he ran to the left. He ran a progressive campaign. I don’t know why they believe this strategy will somehow change now, that now if we run to the center, everything will be fine. The electorate is restless. They have rejected it in the past. And you see how strong their support for Bernie is, and so I believe he has the best shot.

AMY GOODMAN: Interestingly, just yesterday, President Trump went against his own promises in 2016, in a CNBC interview said he is weighing cutting Social Security, Medicare. And, of course, these are the key issues of the Sanders campaign, Medicare for All and preserving Social Security.

TIM ROBBINS: Yes. And I’m going to be campaigning for him in North Carolina next week. And, you know, I hope that — I hope that the campaign can win.

AMY GOODMAN: Well, we’re going to go to break and then talk about a new report that has just come out and Dark Waters, this new film that Tim Robbins is starring in, and how they converge. Tim Robbins, the Oscar-winning actor, won for Mystic River. When we come back, we continue with him, and we’ll be joined by the attorney Rob Bilott. The film Dark Waters is about his 20-year battle with DuPont over contaminated drinking water in West Virginia. What’s the latest news about Teflon contamination in this country and around the world? Rob Bilott will also be joining us. Stay with us.

AMY GOODMAN: That’s “The Cradle Will Rock” from the film by the same name directed by Tim Robbins.