The war in Libya will never end 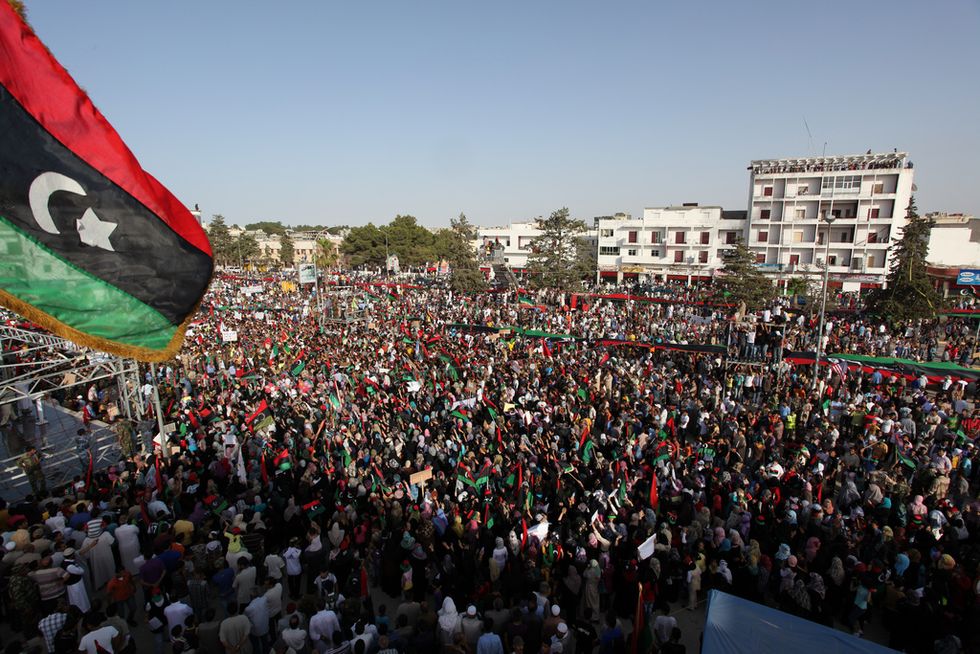 General Khalifa Haftar and his Libyan National Army (LNA) continue to partly encircle Libya’s capital, Tripoli. Not only does the LNA threaten Tripoli, but it is within striking distance of Libya’s third-largest city, Misrata. Both Tripoli and Misrata are in the hands of the Government of National Accord (GNA), which is backed by the United Nations and—most strongly—by Turkey. The second-largest city—Benghazi—is in the hands of Haftar’s LNA. Haftar’s LNA is backed by Saudi Arabia, Egypt, and Russia. There has always been a whiff of suspicion that Haftar himself is an old CIA asset—having lived under the shadow of the CIA headquarters in Langley, Virginia, for decades. What the NATO war on Libya did to that country is to turn it into a battlefield of other people’s ambitions, to reduce Libya into a chessboard for a multidimensional game that is hard to explain and even harder to end.

On January 19, the United Nations and the German government held a conference in Berlin on the Libyan question. Curiously, the two belligerent parties from Libya were in Berlin but did not attend the conference. General Haftar of the LNA and Fayez Serraj of the GNA stayed in their hotels to be briefed by German Chancellor Angela Merkel and the UN representative on Libya Ghassan Salamé. In 2012, the UN had said that no conference should be held that is not “inclusive” and does not have the stakeholders at the table. Nonetheless, the point of this exercise was not so much to create a deal within Libya as to stop the import of arms and logistics into Libya. “We commit to refraining from interference in the armed conflict or in the internal affairs of Libya,” agreed the external parties, “and urge all international actors to do the same.” External backers of each of the sides—Egypt, France, Russia, Turkey, the United States—were all signatories of this agreement. You can imagine that none of them will take it seriously.

Merkel hastened to Istanbul after the Berlin conference to solidify the pact she has made with Turkey’s President Recep Tayyip Erdoğan, who then flew to Algeria to say that he would not appreciate external intervention into Libya. It is not Erdoğan alone who sounded bewildering—all the other leaders who came to Berlin made similar remarks. You stay out of Libya, they said, but we will have to be involved in any way we think appropriate. Turkey has provided the GNA with arms and logistical assistance, and it has helped bring a few hundred Syrian jihadis to Libya to assist the GNA-backed militias.

The UN released a statement recently with a clear indication that the deal is not worth its paper. “Over the last ten days,” the UN notes, “numerous cargo and other flights have been observed landing at Libyan airports in the western and eastern parts of the country providing the parties with advanced weapons, armoured vehicles, advisers and fighters.” It does not name the countries that continue to violate the embargo, but everyone knows who they are.

Emboldened by his backers, Haftar’s forces tested the GNA and its assorted militia groups in the outskirts of Misrata over the past few days. The LNA had taken up positions in al-Wishka, but they made a foray into Abu Grein, which is on the road to Misrata. The ceasefire that was supposed to be honored was violated, as the GNA Army’s spokesperson Mohammed Gununu said on Sunday. Haftar’s spokesperson Ahmed al-Mismari said that there is no political solution for Libya; the only solution is through “rifles and ammunition.” It is a clear statement that this war is not going to be ended at the UN or in Berlin. It will have to end in Misrata and in Tripoli.

Neither Saudi Arabia nor Turkey will relinquish their backing of the LNA and the GNA, respectively. No one makes any public noises about this, although everyone knows that it is these powers that are behind this horrendous new phase of the conflict ever since NATO entered Libya in 2011 and sent the country into a situation of permanent war. The UN has done the calculations. Since April, in Tripoli alone there are 220 schools closed and at least 116,000 children with no education. Schools, universities, hospitals—all working on reduced hours or closed.

Haftar made his move on Tripoli in April 2019. He felt that he not only had the backing of the most important powers, but that he had already taken charge of several oil fields and squeezed the Tripoli government. His rush to Tripoli, dramatic in the first few weeks, then stalled in the outskirts of the capital. He is obdurate, unconcerned that his war will simply continue the attrition of social life that had begun in the 1990s and accelerated after the NATO war in 2011.

On January 19, the LNA and its allies seized the Sharara and El Feel oil fields; both of them produce a third of Libya’s oil, Sharara being the largest single field in this country. Oil production from Libya fell to less than 300,000 barrels per day from over a million barrels per day previous. The Libyan National Oil Company—controlled by the government in Tripoli—has now forced an embargo on oil exports from Libya. This is a blow to Europe, which relies on the sweet Libyan oil as much as it has relied upon Iranian and Russian energy sources—both blocked by U.S.-driven sanctions.

Europe wants the oil but does not want the refugees. A UN report was recently released on the LNA’s bombardment of a refugee detention center in Tajoura on July 2, 2019. That attack, by LNA aircraft, killed 53 migrants and refugees who had come from Algeria, Chad, Bangladesh, Morocco, Niger, and Tunisia. After the jet dropped its bombs on the Daman complex, there were “bodies everywhere, and body parts sticking out from under the rubble. Blood [was] all around.” The migrants and refugees who survived remained in the complex. Four days later, they went on hunger strike. There have been several murders since July 2019, mainly of refugees shot by guards as they tried to leave the various detention centers that sit along the Libyan coastline and in Tripoli. There is no proper account of the total number of refugees and migrants in detention.

The European Union (EU) has been paying the Tripoli government and militia groups to hold these refugees and migrants in Libya rather than let them travel across the Mediterranean Sea. Europe has taken no responsibility for its role in the NATO war in 2011, which destabilized Libya; it has, instead, militarized the refugee crisis in Libya by using the militias. Operation Sophia of the EU brought European ships into the Mediterranean Sea to stop oil and refugee smuggling from Libya to Europe; there is now interest in restarting this policy. In Berlin, the EU’s High Representative Josep Borrell told the Süddeutsche Zeitung that “Libya is a cancer whose metastases have spread across the entire region.” This is the attitude of Europe: how to contain the crisis and let it remain within the Libyan borders. It is a shocking statement.

I Have No Illness

In the midst of Libya’s war against Italian colonialism a century ago, the poet Rajab Hamad Buhwaish al-Minifi wrote a poem—“Ma Bi Marad” (“No Illness but This Place”)—about the torment of his society. This is a poem that is often recited, never far from the lips of Libyans who know their long and difficult history. The line that repeats often in the poem, “Ma bi marad ghair marad al-Egaila” (“I have no illness but this place of Egaila”), seems apt for Libya today, a people abandoned to this war that will never end, a people buried in oil and fear, a people who are in search of the home that has been taken from them.