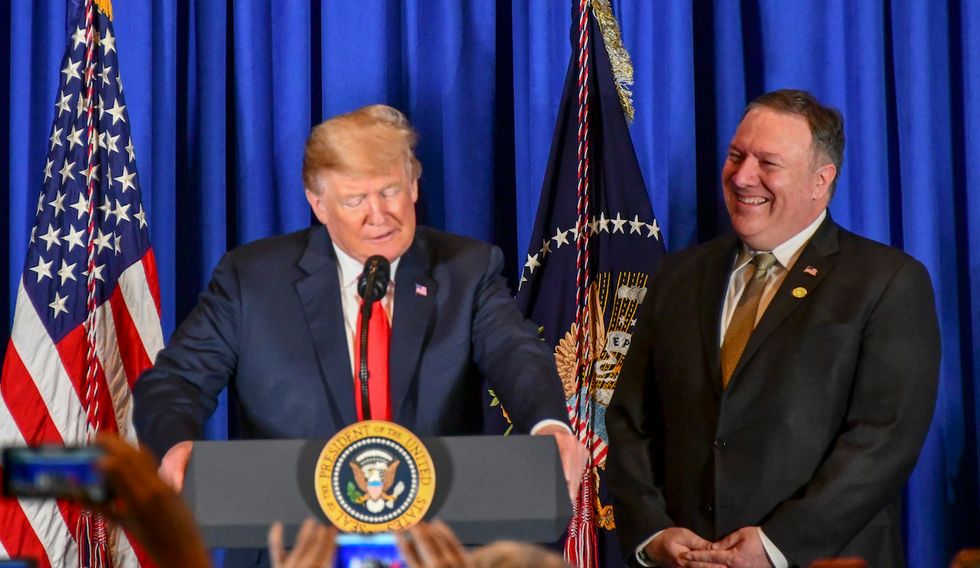 Trump regime officials are working overtime to try and rationalize the least rational act by an irrational president in an irrational presidency. “The president has always made it his first priority to protect American citizens, and the intel that we had, the information we had — which we believe was very strong — shows that Soleimani and those he was plotting with were looking to kill American diplomats and soldiers in significant numbers in the coming days,” said national security adviser Robert O’Brien.

The statement is all sorts of ridiculous.

1) “The information we had.” This is a regime that has spent the last three years undermining the legitimacy of our intelligence and national security agencies. Now we’re supposed to believe that they trust those same agencies? Risible. And of course, we’ve been through this song and dance before. There is no such information. They’re lying.

2) The president’s first priority is making money for himself. Why pretend otherwise?

3) It’s likely that Soleimani was involved in organizing militias that are fighting U.S. forces and their allies. It’s no surprise that we’re fighting a multi-front proxy war in the Middle East, and not for lofty ideals like “democracy” and “human rights.” We’re working on behalf of Saudi Arabia and Kuwait and other despotic regimes that are despicable abusers of basic human rights. On the other side, we have Iran, yes, but also Trump’s crush, Russia. If Soleimani is complicit in plotting to harm U.S. troops (likely), so is Putin. And heck, so is Saudi Arabia, for that matter.

4) If it’s true that Soleimani was plotting actions that will take place in the very near future, how does killing Soleimani affect those plans? He wasn't going to strap on a suicide vest himself and run into a U.S. embassy in the region. His role would be to sign off on such an attack, and let others manage the planning and execution. Killing him does nothing to stop such an attack. And—here’s the rub—by killing him, the U.S. has forfeited all moral authority.

Say that tomorrow, a U.S. diplomatic outpost in the region gets hit, several American diplomats die. Iran can claim retaliation, and the world community will simply grimace and nod. Trump opened up that Pandora’s box, and who can argue that Iran isn’t justified? On the other hand, had that same attack happened without the assassination, the United States would have a compelling case to take to the world community, and a strong rationale to build international consensus against Iran.

Of course, that would assume an American regime interested in “international cooperation.” But regardless, we are now an isolated rogue state, and we’ve handed Iran a hall pass to commit all sorts of atrocities against American targets in the name of “an eye for an eye.”

In the end, the Soleimani assassination has united Iran against the U.S.; given it a global green light to strike at American targets; done nothing to make America safer; shipped thousands of fresh troops to the Middle East, tearing them away from their husbands, wives, children, and other loved ones—and for what?

America is certainly not rallying around Trump. We are far too partisanized to give an objectively truth-resistant government the benefit of the doubt. NOTHING is moving Trump’s numbers anymore.

We’ve been burned already, losing thousands of lives and trillions of dollars to wars in Iraq and Afghanistan. We can’t even handle the ragtag Taliban. Iraq has kicked us out of the country. We’ve burned the Kurds, losing our most valuable ally in the region. Even Israeli Prime Minister Benjamin Netanyahu is backing away slowly, saying that it’s not his country’s war: “The assassination of Soleimani isn’t an Israeli event but an American event. We were not involved and should not be dragged into it.” Oh, and we may lose the United Nations headquarters over this, too.

This is a mess, it’s going to get worse, and it’ll all play out in the 2020 presidential campaign, which means every action and reaction and consequence will be magnified 1,000 times. Buckle down, people, and prepare to fight like never before. Everything is on the line this year. Everything.