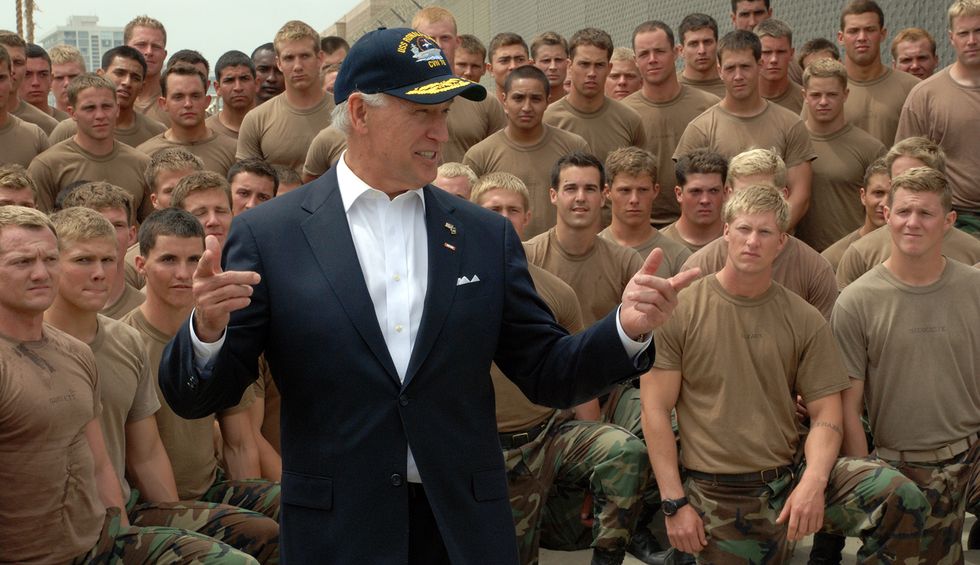 While Biden and his surrogates like John Kerry continue to falsely claim that the former vice president and U.S. senator was not for the Iraq invasion, the Bernie Sanders campaign has rightly highlighted more documentation—such as this video—of Biden's support for the Iraq invasion both before and after it happened.

Among the damning evidence is this statement about President George W. Bush that Biden made the Brookings Institution in July 2003, when he said, "The president of the United States is a bold leader and he is popular."

But that is only the tip of the iceberg. His full remarks to Brookings—which you can view here—contain numerous and brazen pro-war falsehoods, with Biden claiming that Saddam Hussein "violated every commitment that he made. He played cat and mouse with the weapons inspectors. He failed to account for the huge gaps in weapons declarations that were documented by U.N. weapons inspectors and submitted by them to the U.N. Security Council in 1998, and every nation in that Council believed he possessed those weapons at that time. He refused to abide by any conditions."

It's a pack of lies. The Iraqi government released a massive amount of information in 2002, it agreed to allow the UN weapons inspectors in well before the Congressional vote that authorized war—a vote that Biden has claimed was justified in order to give Bush a stronger hand in getting inspectors into Iraq. Additionally, the prior weapons inspection regime, UNSCOM, was ended in 1998 not because Saddam Hussein kicked them out, but because Bill Clinton ordered them withdrawn on the eve of his scheduled impeachment vote to make way for the Desert Fox bombing campaign.

It's remarkably fitting that the Biden camp has put out Kerry on this issue since Kerry's falsifications regarding Iraq are remarkably similar to Biden's. Kerry might be the only Democratic senator whose record helped the Iraq war as much as Biden's. This notably led to his contortions expand=1] during the 2004 presidential campaign when he was the Democratic Party nominee ultimately defeated by Bush.

When I questioned Kerry in 2011 about his vote for the Iraq invasion, he claimed that he "didn't vote for the Iraq war." Kerry said, "I voted to give the president authority that he misused and abused. And from the moment he used it, I opposed that." That's another lie.

Kerry actually attacked the notion of a withdrawal from Iraq at that point, even saying in December of 2003: "I fear that in the run-up to the 2004 election the administration is considering what is tantamount to a cut-and-run strategy"—effectively taking a position even more militaristic than Bush. Also see a CNN headline from August 2004 titled: "Kerry stands by 'yes' vote on Iraq war."

Also remarkable is just how little scrutiny Biden has gotten for his role in the Iraq invasion. Sanders has mostly criticized Biden's vote, but Biden was also chair of the Senate Foreign Relations Committee and has been criticized by leading analysts and weapons inspectors for the hearings he presided over that led to war. Rep. Tulsi Gabbard (D-Hawaii), viewed by many as an antiwar candidate, has outright let Biden off the hook.

At a debate last year, Gabbard said of Biden: "He was wrong—he said he was wrong." Thus, Biden may be positioned to become the Democratic nominee—and face Trump in the general election—with minimal scrutiny for his major role in the worst policy decision of our lifetimes.

But let's be clear, he will likely be in a worse position to take on Trump's phony "America First" isolationism than even Hillary Clinton was in 2016.

Sam Husseini is a writer and political activist. He is the communications director of the Institute for Public Accuracy, a D.C.-based nonprofit group that promotes progressive experts as alternative sources for mainstream media reporters. He tweets @samhusseini.