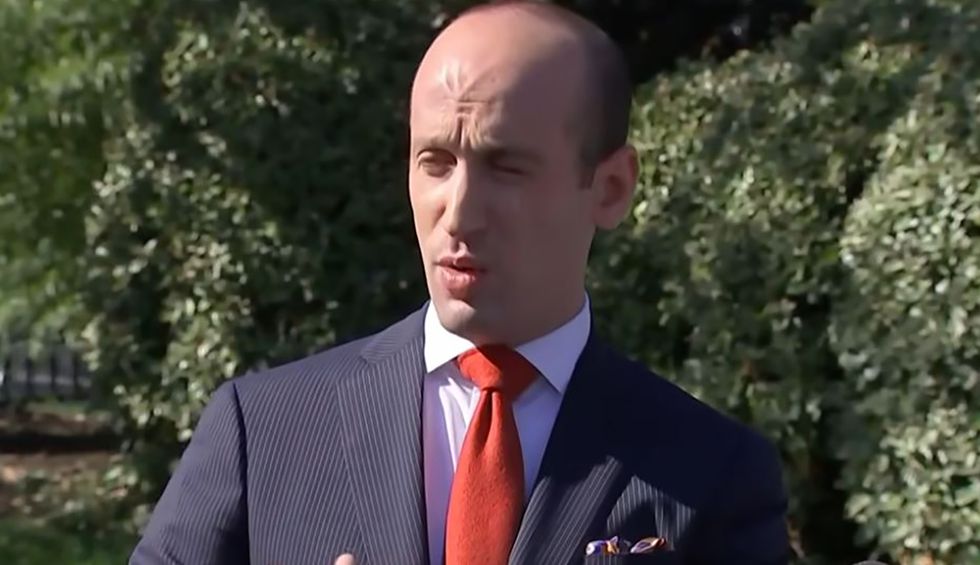 Not even an impeachment trial can slow down the White House's anti-immigrant agenda.

Even as Chief Justice John Roberts presided over the Senate's trial of President Trump on Monday, the Supreme Court gifted senior White House adviser and documented white nationalist Stephen Miller by lifting a lower court's nationwide injunction against discriminatory new rules that represent the strongest effort to restrict legal immigration into the U.S. in more than a century.

On Holocaust Memorial Day, all five Republican-appointed Supreme Court justices approved an expansion of the "public charge" policy that was once used to close the door on Jewish refugees from Europe. A "public charge" has historically referred to someone who is "primarily dependent on the government for subsistence" based on their receipt of "public cash assistance." In an effort to encourage self-deportation by making people's lives miserable, the Trump administration announced last August plans to expand the definition of a public charge — an immigrant who received one or more designated public services — thereby providing an avenue by which to deny permanent resident status. It punishes immigrants for using public services to which they are legally entitled.

Under the new rules, even legal immigrants who haven't yet received any public assistance but are determined to be "more likely than not" to do so at some point in their lifetimes could be denied entry into the U.S. or denied permission to remain as permanent residents. This gives enormous discretion to officials in determining who is a "public charge." One Trump administration guidance includes any immigrant whose current family income is below 125 percent of the federal poverty level. Of course, such a criterion would result in racial disparate impacts, as many immigrants of color come from nations with low wage levels. For example, few adults living in Africa earn above 125 percent of the U.S. poverty line. After immigrating to the U.S., however, employed immigrant men from Africa earned an average of $63,101 in 2012 — or about 250 percent of the poverty line.

Roughly 544,000 immigrants apply for green cards annually. According to an analysis from the nonpartisan Kaiser Family Foundation about 94 percent would be subject to the new review, while 42 percent of legal immigrants could see their green card applications "weighed negatively." The new rules would even deem about half of all U.S.-born citizens likely to be a public charge, according to the Center on Budget and Policy Priorities.

Green card denials based on the public charge policy have dramatically jumped since Trump took office, with the State Department disqualifying more than 12,000 visa applicants in 2019 based on the rule, versus just 1,033 people in 2016 under the Obama administration.

In blocking the rule back in October, U.S. District Judge George Daniels, one of five federal judges to rule against the Trump administration, called the expanded rule "repugnant to the American Dream of the opportunity for prosperity and success through hard work and upward mobility" and a "policy of exclusion in search of a justification." The New York district court judge issued a nationwide injunction on its implementation and while the Second Circuit Court of Appeals allowed his injunction to remain in effect, the Ninth Circuit Court of Appeals overturned a similar injunction. The Supreme Court sided with the Ninth Circuit on Monday.

Nothing in the Supreme Court's decision addresses the merits or the morality of Trump's immigration policy. This decision was entirely a matter of legal jurisdiction, as the conservative justices saw it. They derided the idea of district courts imposing nationwide injunctions on Trump administration policy. Justice Neil Gorsuch, joined by Justice Clarence Thomas, issued a five-page concurring opinion with Monday's order arguing that such nationwide injunctions exceed the authority of federal judges.

"The real problem here is the increasingly common practice of trial courts ordering relief that transcends the cases before them. Whether framed as injunctions of 'nationwide,' 'universal,' or 'cosmic' scope, these orders share the same basic flaw — they direct how the defendant must act toward persons who are not parties to the case," Gorsuch wrote.

"What in this gamesmanship and chaos can we be proud of?" Gorsuch asked.

But as Judge Daniels noted in October, true chaos is caused not by the technicalities of judicial review but by an administration that is attempting to radically disrupt determinations that have guided immigration policy for more than a century. Trump officials did not "articulate why they are changing the public charge definition, why this new definition is needed now, or why the definition set forth in the Rule — which has absolutely no support in the history of U.S. immigration law — is reasonable," Daniels ruled. By allowing the rollout of the new rule to move forward anyway, the Supreme Court is helping sow chaos and confusion, to chilling effect. Families that include immigrants already have forgone critical services out of an abundance of caution and will almost certainly continue to do so, at great cost.

The Supreme Court, with the addition of two new Trump-picked justices, has repeatedly served as a tool to cow the lower courts into submission on immigration. As with the public charge case, the Roberts court has allowed Trump's Department of Justice to skip the appeals court to request direct relief from the Supreme Court. So much for conservative complaints about judicial activism.