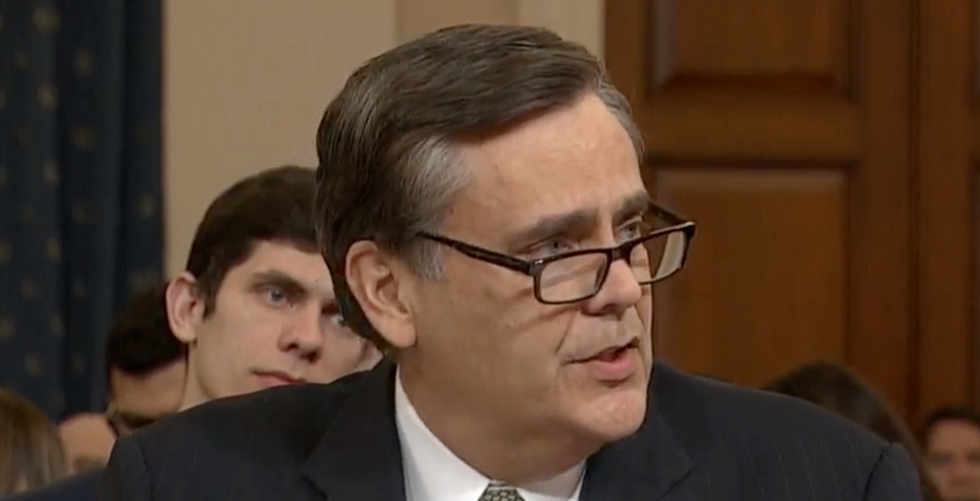 When the House Judiciary Committee held a public hearing of constitutional scholars to testify as a part of the impeachment inquiry into President Donald Trump's conduct, the Democratic-controlled body allowed the minority of Republicans to bring forth their own witness to argue in the White House's defense. That role went to Jonathan Turley, who was critical of the House's proceedings and was skeptical about the evidence of the president's guilt.

But as the case moved from the House to the Senate for Trump's trial, Turley has become critical of the way the White House is defending the president.

In a new op-ed this week in the Washington Post, Turley — who was widely criticized for putting forward weak defenses of Trump in the House — said that even he can't support Trump's new line of defense against the core charge of abuse of power.

The new line, put forward most prominently by Alan Dershowitz, is that "abuse of power" is not actually an impeachable offense. And other lawyers for the president say you can't impeach the president without a criminal charge.

"It is a view that is at odds with history and the purpose of the Constitution," Turley wrote. "While Framers did not want terms such as 'maladministration' in the standard as dangerously too broad, they often spoke of impeachable conduct in noncriminal terms, such as Justice Joseph Story referring to 'public wrongs,' 'great offenses against the Constitution' or acts of 'malfeasance or abuse of office.' Alexander Hamilton spoke of impeachment trials as addressing 'the misconduct of public men, or, in other words, from the abuse or violation of some public trust.'"

Overall, Turley is still critical of the Democrats' impeachment effort, especially the charge of obstruction of Congress. But he warned that senators may be unwilling to accept the White House's sweeping claims in Trump's defense, even if the president himself can't resist making the absolutist claim that he did nothing wrong.

"There is a vast array of harmful and corrupt acts that a president can commit outside of the criminal code," Turley wrote. "While I believe that articles of impeachment are ideally based on well-defined criminal conduct, I do not believe that the criminal code is the effective limit or scope of possible impeachable offenses. If some of the president’s critics are adopting a far too broad understanding of impeachable offenses, the White House is adopting a far too narrow one."

Trump and his defenders are making a "mistake," Turley said, "by reducing the definition of impeachable conduct to the criminal code. It is an argument that is as politically unwise as it is constitutionally shortsighted."