Reporters should stop treating Trump and his advisors as credible sources 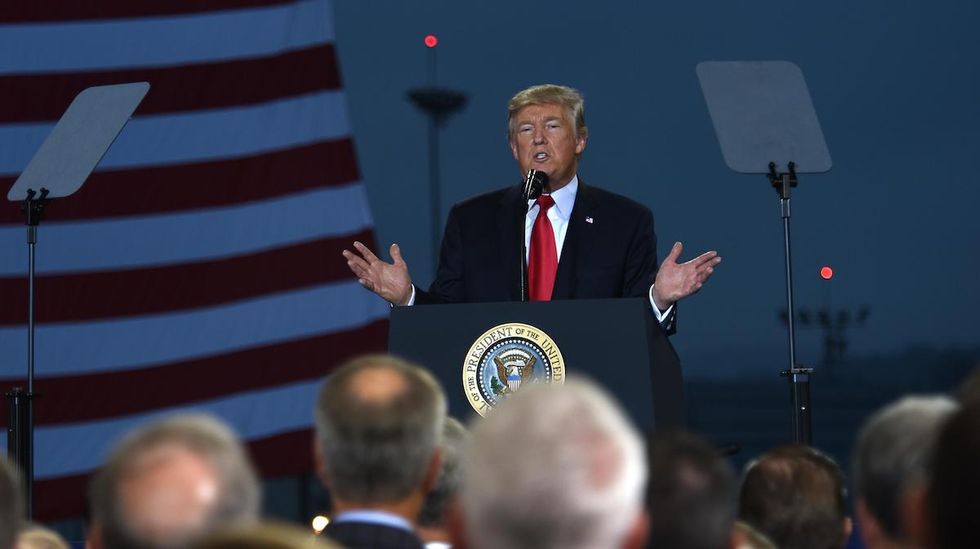 President Donald J. Trump speaks to members of the public and media Oct. 11, 2017, at the 193rd Special Operations Wing, Middletown, Pennsylvania. The president discussed his plans for tax reform at the event, held on base in an aircraft hangar. (U.S. Air National Guard photo by Staff Sgt. Tony Harp/Released)
Joshua Holland
and
Joshua Holland
January 08, 2020

If you've been paying any attention at all over the past three years, several things should have been clear to you from the moment the Pentagon confirmed that Donald Trump had ordered the assassination of Iranian general Qassem Suleimani in Iraq. It was inevitable that in the days that followed, reporters would learn that Trump had made the call precipitously, driven by what he watched on Fox News, and that US military officials and at least some White House advisors were shocked at the decision. One should have known that he'd blame Obama and the Iran nuclear agreement for inflaming the region, and claim that Iran was the aggressor. One should have known that Trump's stated justification for the attack would come to look increasingly flimsy as the story developed, and that while there was a chance that a miscalculation could lead to war, in all likelihood, he would beat a hasty retreat from the crisis he'd created. It should have been equally clear that whether or not they were happy about it, the entire Republican establishment would echo Trump's claims.

All of that has come to pass. We are in the fourth year of Trump's presidency*, and while he is often described as "erratic," these patterns of behavior have become abundantly clear. Reporters and editors know that Trump has made 15,413 "false or misleading claims" over the course of 1,055 days in office through mid-December, according to The Washington Post's fact-checker.  And yet, during the first few days before those reports came in detailing the chaotic process behind the scenes and making it clear that there was never any strategic thinking beyond Trump's belief that Americans would rally around him if he escalated his conflict with Iran, the press told the official version of events because that's the only version that had available.

This gets to the central conundrum of covering the Trump regime: What the president and his senior officials say is objectively newsworthy, and yet they have proven over and over again that they are anything but credible sources of information. When the guy who has the nuclear codes makes an outlandish claim, that's news. So reporters "gather string"--getting a sense of what really happened from their own government sources inside and outside the White House--but they end up serving as conduits for Trump's habitual lies in the interim.

I say it's a conundrum because the media has a mandate to give the public a big story as soon as possible with the best information available, and journalistic conventions require that they do so without editorializing. Common sense suggests that a serial liar's pronouncements are likely to be untrue, but it would be a fallacy to make that assumption.

Those conventions serve us well, on balance. But because of his shamelessness when it comes to peddling falsehoods, they work in Trump's favor.

The better way to cover Trump (and I don't expect this to happen) would be to cover Trump and his senior staff as subjects rather than as official sources. Journalists do this all the time with newsmakers whose claims are viewed with skepticism--celebrities embroiled in scandals, people with criminal records or substance abuse issues or foreign adversaries.

After decades of hectoring about their ostensible "liberal bias," most journalists are loathe to step away from the prevailing model of covering American politics, but setting politics aside, they should cover a regime headed by a guy who has offered an average of 15 "false or misleading claims" each day over the course of his presidency* very differently than they would an ordinary president.