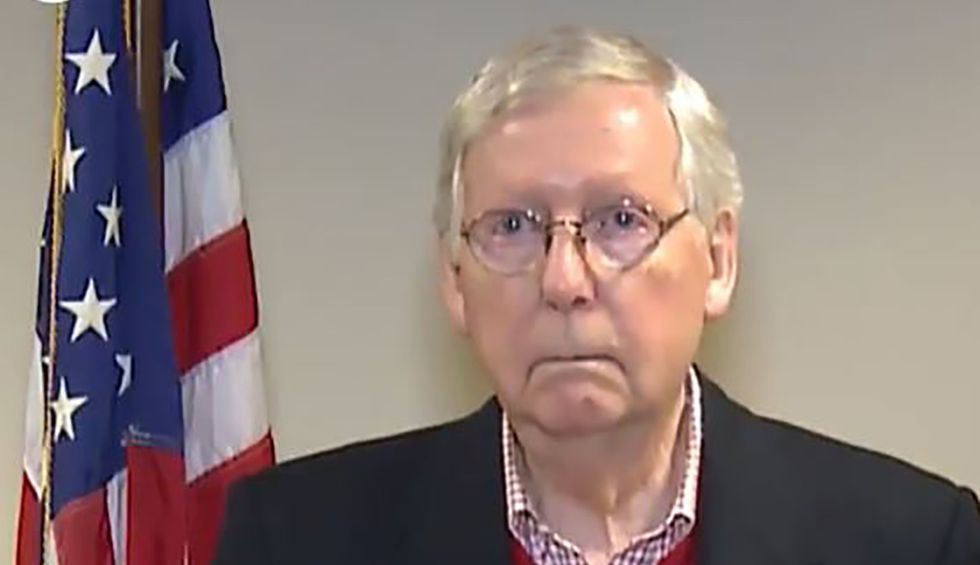 On CNN Tuesday, fact-checker John Avlon broke down the main arguments the GOP is making against convicting President Donald Trump.

“Presidential impeachment is a serious business, so you might expect the defense to be serious as well,” said Avlon. “But unfortunately, that doesn’t seem to be the case, judging by two documents put forward by President Trump’s lawyers. They essentially represent an attempt to put Trump’s twitter feed and rally speeches into legalese. Here is a look at five fact-free arguments you are likely to hear.”

“One, the articles of impeachment violate the Constitution,” said Avlon. “These are nonsense words and a contradiction in terms. Impeachment is written into the Constitution. Good people can disagree with the charges, process, or whether it rises to the level of removal from office, but it takes brass to argue that impeachment is unconstitutional.”

“Two, this he failed to allege any crime or violation of law whatsoever,” said Avlon. “Now, Republicans seem set to ignore the recent findings from the GAO after the articles were adopted, that the hold on Ukraine military aid did break the law. Trump and Republicans seem to be arguing without an indictable crime, impeachment is illegitimate.”

“Number three. Abuse of power is not an impeachable offense,” said Avlon. “The White House legal brief calls it a ‘novel theory’ and ‘made-up standard.’ That’s a novel definition of ‘novel,’ which the dictionary defines as new and not resembling something formerly known. Abuse of power was the second article of impeachment drawn up about President Nixon and President Clinton at the recommendation of Ken Starr, now a member of the Trump legal team. Let’s go back to the Constitutional Convention and look, there’s Edmund Randolph later the first attorney general, arguing that impeachment was important because, quote, ‘the executive will have great opportunities of abusing his power.'”

“Number four, obstruction is not an impeachable offense,” said Avlon. “They’re calling it ‘a radical theory that would do grave damage to the separation of powers,’ but this is not a radical idea. Obstruction was core to the articles of impeachment against Nixon, and the Supreme Court weighed in in U.S. versus Nixon, writing, ‘generalized assertion of privilege must yield to the demonstrated specific need for evidence in a pending criminal trial.’ Of course, Bill Clinton was initially accused by Ken Starr of abusing his power by invoking executive privilege and lying repeatedly … and that’s despite landing over reams of documents, allowing direct witnesses to testify, all things the Trump White House has refused to do. And Clinton even testified under oath himself.”

“Finally, number five, despite all the evidence the president did nothing wrong,” said Avlon. “That’s right. The president’s legal team is all in with his insistence of complete innocence, arguing that the call with the ukrainian president was perfectly appropriate and just about the important issue of Ukrainian corruption, Now, if all of this is true, you would think that the White House would be fighting to have direct witnesses exonerate the president under oath. That’s not what’s happened. Instead, the fact-free strategy of deflect and project, arguing it’s the Democrats who are engaged in a brazen unlawful attempt to interfere with the 2020 election.”