Parnas says Trump, Pence, Pompeo, Bolton and Giuliani all knew -- and he's why no witnesses will testify in the Senate 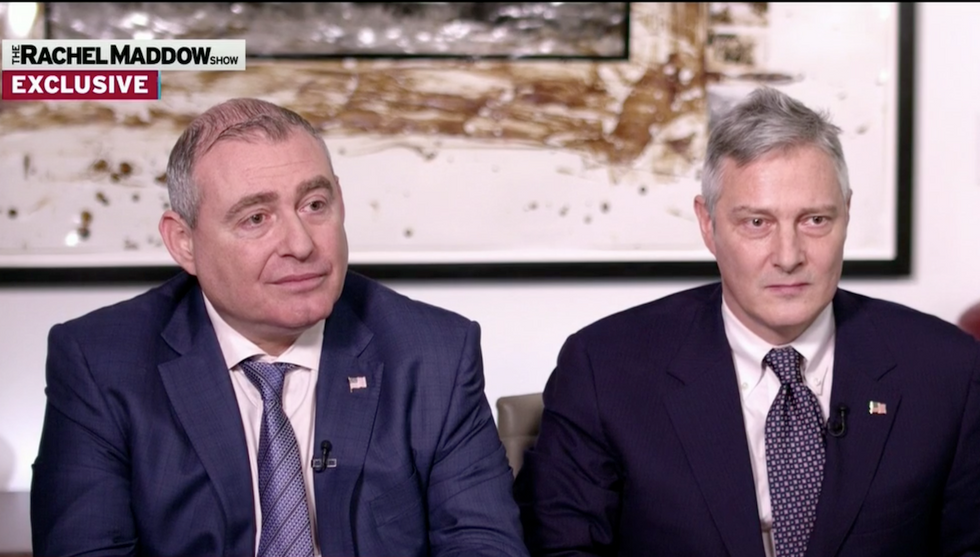 Lucian K. Truscott IV
and
Salon
January 18, 2020
Revelations this week by Rudy Giuliani's henchman Lev Parnas in interviews with MSNBC, CNN and the New York Times blew Iran out of the headlines and landed on Capitol Hill like a bomb. Here was an insider in the Ukraine conspiracy not only willing to talk, but to provide documents to back up allegations he has made about Trump's shakedown of Volodymyr Zelensky to get dirt on his potential Democratic opponent,  Joe Biden.

Parnas is the reason Republicans are so scared of opening the Senate trial of Trump to witness testimony. According to Parnas, everyone was in on the Ukraine scheme. Trump himself, of course, but also Vice President Mike Pence was in on it. So was Attorney General William Barr, so was Secretary of State Mike Pompeo and so were Secretary of Energy Rick Perry and national security adviser John Bolton. At the very center of the scheme, according to Parnas, was the man he worked for, Trump's personal attorney Rudy Giuliani.

Parnas has letters, text messages, contemporaneous notes, travel documents and more to back up his recollections of what happened as Trump tried to muscle Ukraine into aiding his re-election campaign by announcing an investigation of Biden. Trump was obviously getting ready to pound Biden with Ukraine conspiracy allegations the same way he pounded Hillary Clinton about her emails in 2016. Hey, it worked once! Why not?

After testimony by 10 witnesses before the House Intelligence Committee last fall, new information has continued to roll in. We have recently learned that the order to withhold the $400 million in congressionally appropriated aid to Ukraine came the day after Trump's "perfect" phone call with the Ukrainian president last July 25. More recently, a series of emails and other contacts at the top of the Trump administration questioning the legality of the sequestering of the funds has come to light. And now we've got Parnas and his trove of texts, notes, letters and other documents that back up his stories about working for Giuliani to get former Ambassador Marie Yovanovitch fired, and all the machinations surrounding the shakedown of Ukraine's president and other officials to get them to investigate Biden.

But too little attention has been paid to the oldest question of all: Cui bono? Who benefits? Trump, of course. But how? Was it all about Biden, or was there something else Trump was trying to accomplish? Scratch the surface of the Ukraine scandal, and what you see is Russia, and Trump's old pal, Vladimir Putin.

Parnas was born in Odessa, Ukraine, in 1972 when it was part of the Soviet Union and was brought to the United States three years later by his parents. He has retained at least some fluency in the Ukrainian language as well as Russian, and last summer served for a time as a translator on the defense team of Dmytro Firtash, working for Washington lawyers Victoria Toensing and Joseph diGenova, a Washington D.C. power couple who appear frequently on Fox News.

Parnas did more than hint at the Russia connection in his interview on MSNBC with Rachel Maddow. He told Maddow that Giuliani ordered him to tell Zelensky that Vice President Pence would not travel to Ukraine for Zelensky's inauguration on May 12 unless he announced the Biden investigation. When Zelensky refused, Pence cancelled his trip the next day. Parnas explained that a show of support by Trump and the United States was just as important to Zelensky as the military aid the Congress had appropriated, which was why the cancellation of Pence's visit was such a blow.

When the transcript of the July call between Trump and Zelensky was released, all the coverage was on Trump's quid pro quo, the "favor" he asked for regarding a Biden investigation immediately after Zelensky's mention of military aid, and Trump's references to Giuliani and Barr.

But if you go back and read Zelensky's portion of the call, it was all about Russia. Zelensky complained that the European Union wasn't doing enough with sanctions against Russia. "They are not enforcing the sanctions. They are not working as much as they should work for Ukraine," Zelensky said, buttering up Trump. "It turns out that even though logically, the European Union should be our biggest partner but technically the United States is a much bigger partner than the European Union and I'm very grateful to you for that because the United States is doing quite a lot for Ukraine." He talked more about looking forward to visiting Trump in Washington and Poland and the "friendship" between Ukraine and the U.S. than he did about military assistance.

Ukraine had lost Crimea to Russian aggression in 2014 and since then had been fighting a war on its eastern border against separatists backed by Putin's military. To date, that war has resulted in nearly twice as many Ukrainian casualties than the U.S. has lost in Iraq and Afghanistan combined over the last 18 years.

Putin's ambition for a "greater Russia," if not a new Soviet Union-style Russian empire, began with Ukraine, and he wants it badly enough to fight a war for it. If Ukraine has reportedly lost as many as 14,000 in its war against Russian separatists, Russia must have lost just as many. Reports this week about Putin's maneuvers toward keeping himself in power indefinitely have to make Zelensky's blood run cold. Russia is far bigger, richer and more powerful than Ukraine, and it's right on its eastern border. Putin has the power, if he wants to use it, to make Ukraine simply cease to exist.

Lev Parnas inserted himself into the maelstrom of TrumpWorld with a $50,000 donation during the 2016 campaign, and a $325,000 donation to the Trump super PAC, America First Action, in 2018. He was invited to functions at Mar-a-Lago and the White House, and photographs of Parnas with Trump, members of his family and high officials in the Trump administration have been all over TV screens this week. Parnas was in Ukraine working for Giuliani and texting Rick Perry, Giuliani, various Trump aides and Trump friends like Tom Hicks Jr., who was chairman of America First Action until he left to become co-chairman of the Republican National Committee.

Parnas remained a loyal member of TrumpWorld until the evening of Oct. 9 last year. That night he finished up a dinner with his partner Igor Fruman and Rudy Giuliani at the Trump International Hotel and traveled out to Dulles Airport for a flight to Vienna. Before boarding the plane, he was arrested by the FBI and charged with campaign finance violations.

Parnas found himself in jail and was soon set up by Trump attorney Jay Sekulow with some heavy D.C. legal talent: Kevin Downey, who was also the lawyer for former Trump campaign manager Paul Manafort, and John Dowd, Trump's own former lawyer. Parnas met with the two legal eagles in the federal lock-up and within moments concluded that "they were trying to keep me quiet," as he explained to Rachel Maddow. He described pressing "the buzzer to call the guard" and throwing them out of the jail meeting room. He hired a new attorney who arranged to turn over to the House Intelligence Committee all the documents he had accumulated in the months he worked for Giuliani on the deal to get Zelensky to investigate Biden. So here we are.

Parnas knows why he is facing federal charges for the political donation nobody complained about until the whistleblower exposed Trump's corrupt call to Zelensky. "[Attorney General] Barr is a tool of the president," he said the other night. This week we also learned that Barr has former FBI Director James Comey under investigation, in addition to the investigations he has ordered against former FBI Deputy Director Andrew McCabe and the entire investigation into Russian interference in the 2016 election. Trump has finally found his Roy Cohn. We now have the kind of corrupt attorney general that Yuri Lutsenko and Viktor Shokin were in Ukraine.

It's worth remembering that everything Trump does is for two reasons: to keep himself in office, and to please Vladimir Putin. It's also worth remembering that the House of Representatives, which voted articles of impeachment, didn't pick Lev Parnas. The Senate, which will hold  the impeachment trial, didn't pick Lev Parnas. Donald Trump picked him to help with his shakedown of the president of Ukraine, yet another attempt to get a foreign country to help his election campaign. Lev Parnas is Trump's guy. That's why he's under indictment by Barr's Justice Department and facing serious time in federal prison. That's why he's a smoking gun. He knows too much.