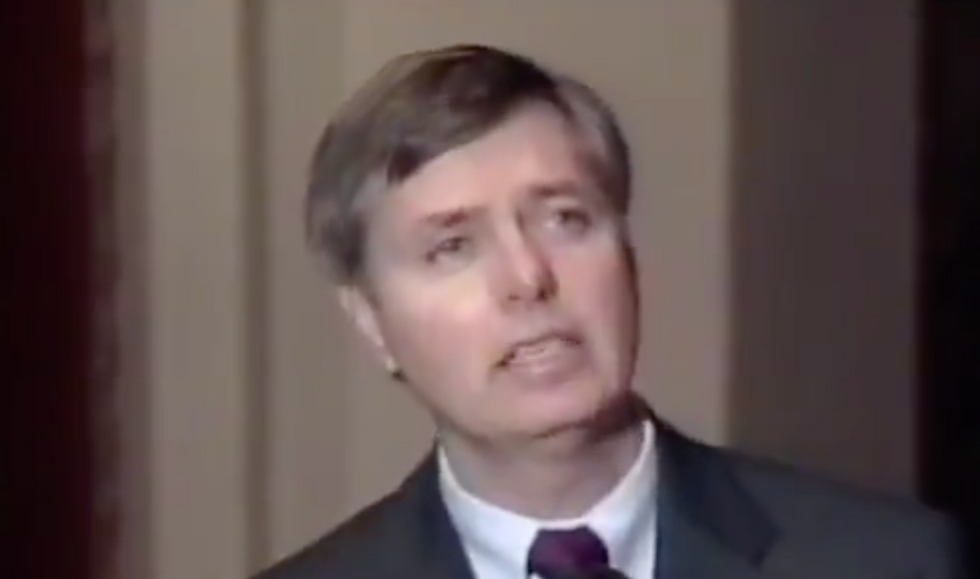 Republican hypocrisy knows no bounds. It is hard to write this in new ways every few minutes, but it is the job of any honest person to acknowledge it. With Donald Trump’s impeachment trial playing out in the Senate and a Republican Party now actively colluding to cover up his crimes, old videos of very visible Republicans and Trump allies contradicting their current positions have started springing up.

Sen. Lindsey Graham is one of the more obvious examples because his 180-degree turnabout on executive powers, the abuse of those powers, and the subject of impeachment is arguably the most transparent example of how craven the Republican Party has become in its amoral quest for power.

Dating back to Jan. 23, 1999, the clip below shows a younger Sen. Graham speaking at a press conference and basking in that camera limelight he so clearly desired and now requires.

SEN. LINDSEY GRAHAM: The law allows a different disposition if the offender comes before the court: “yes I’m guilty and I’m sorry and I throw myself on the mercy of the court.”  The sentence is usually different in a case like that versus someone who takes the legal system to the bitter end, and uses every twist and turn, and every gimmick, to try and beat the charges, for lack of a better word. So I’m going to argue that proportionality is something we need to consider, but is something that the defendant usually has to earn. And when you have someone who has flouted the law at every turn, then usually the sanctions are much more severe.

This was Sen. Graham’s attempt to dismiss the fact that the Republican Party’s “high crime” against then president Bill Clinton was that he obstructed justice in order to hide and lie about an extramarital affair he was having. The “proportionality” being brought to his mouth was the fact that none of it seemed very high crime-like, and Graham wanted to angle for the idea that Clinton’s lack of remorse showed an elitism and a belief he was above the law.

Meanwhile, Donald Trump has arguably committed high crimes not only every day that he has been president, but every day since he began running for president.

“When you have somebody who has flouted the law at every turn, then usually the sanctions are more severe.” —… https://t.co/gXL7zWSZEC
— Windsor Mann (@Windsor Mann)1579811454.0