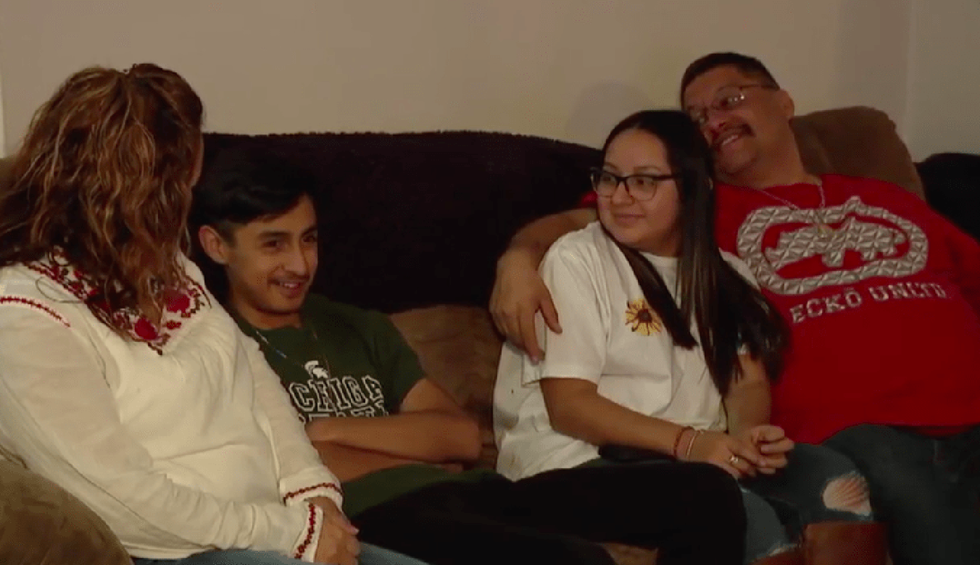 Jorge Garcia, the undocumented dad who in 2018 was cruelly deported by the Trump administration after three decades in the U.S., is back home with his family. Detroit Free Press, which helped nationalize the Garcia family’s fight to stay together, reported this week that the father of two returned to Michigan on Christmas Day after winning his case.

"I'm really happy" Garcia told Detroit Free Press at the Detroit Metro Airport, where he reunited with his wife, Cindy, and two children, Soleil and Jorge Jr. It was a complete shock to the kids, who were told they were going to the airport to meet an uncle. They cried when they saw him. "The last year was very stressful, it got to the point where my blood pressure was very high, I was getting anxiety attacks,” Garcia continued. “I see it like a nightmare ... something like a bad dream."

The bad dream began when Immigration and Customs Enforcement decided to make him a priority for deportation following a routine check-in, even though he has no criminal record. Garcia, just one year too old to qualify for Deferred Action for Childhood Arrivals protections, had spent more than $125,000 over the years trying to gain legal status without success. So on Martin Luther King, Jr. Day, ICE deported him.

Garcia told Detroit Free Press that he struggled after returning to Mexico. "I feel like I'm lost.” Soleil and Jorge Jr. were also distraught, breaking down in tears when they shared their story on The View. “It's very hard for the families, as you can see,” Cindy told the hosts. “Separating families is not the thing to do. It takes a toll on the children. And myself and my children are American citizens and people need to understand that.”

The family, with the support of advocates like Rep. Debbie Dingell of Michigan, continued pushing for Jorge’s return. While an interview a year ago at a U.S. consulate in Mexico resulted in a denial, Detroit Free Press reported this week, “His waivers were then approved in September, said his attorney. Cindy Garcia was hoping he would be home in time for Halloween or maybe Thanksgiving, but authorities kept on asking for paperwork such as medical history, she said.”

Not until a month after would Garcia be able to return home. Now a permanent resident, Garcia is on a path to citizenship.

A great deal of this family’s strength, without a doubt, came from Cindy, who said following the deportation that she had no time to feel sorry for herself because she had a job to do: helping other families. "I can lock myself up in my room, sit and cry with a bowl of ice cream, and waste my life away,” she told Detroit Free Press at the time. “But I don't gain anything from that, and neither do the people that need my help."

Cindy additionally shared the family’s story leading up to the 2018 midterm elections, and as a guest of Rep. Dingell to the State of the Union address that same year. “I ask people, ‘What if this happened to you?’” she told Michigan Radio at the time. “You’ve got to get people to understand how it affects your family. Once you hit a nerve, they get an understanding.” With her family now together once again, Cindy tells Detroit Free Press she isn’t stopping her advocacy.

"I am going to fight more than ever now for these broken immigration laws to be fixed so that no other family has to endure what we did,” she said, “because I know the feeling and I don't want any other children separated from their families because it's a hardship on the kids, on the parents, the whole family in general.” Rep. Dingell also celebrated Jorge’s return, but lamented the emotional trauma of the deportation and urged the passage of legislation to address our inhumane and unfair immigration system.

"It's a deep sigh of relief now that Jorge is reunited with Cindy and the Garcia children,” she said in a statement as reported by Fox 2 Detroit. “They lost nearly two years with their father—time they will never get back. This was reflected in the statements from the children this past Christmas Day. Soleil told Detroit Free Press that when she first saw her dad at the airport, “I was crying because I was happy.” Jorge Jr. said, "It's been hard, not having a dad."