LISTEN: Trump judge asks House why they can't send Sergeant at Arms into the DOJ with a gun for documents 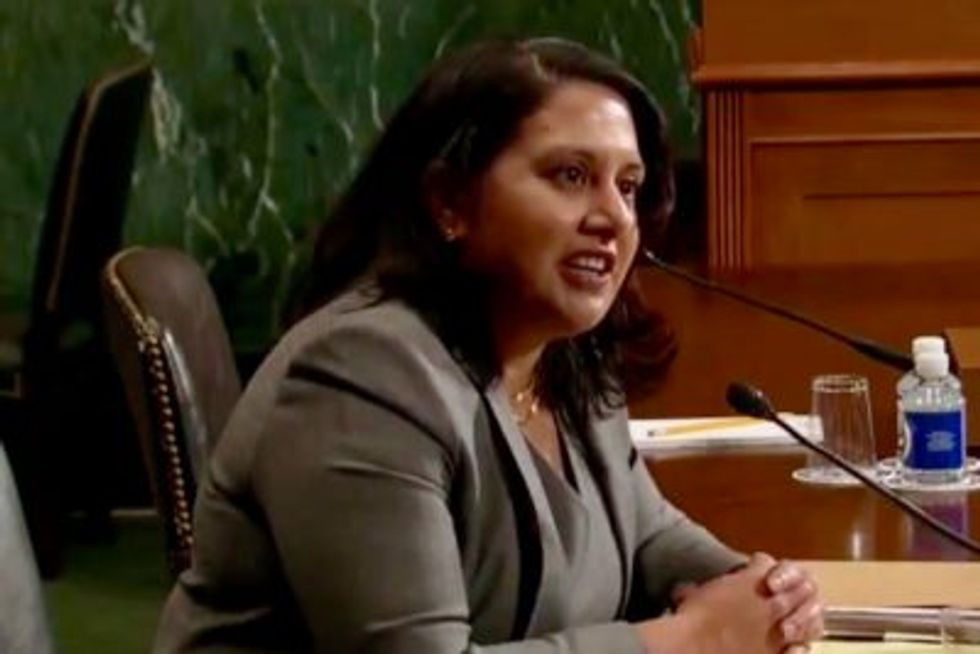 A strange exchange erupted between the U.S. House counsel and a federal judge appointed by Donald Trump Friday over the subpoenaed documents from special counsel Robert Mueller’s investigation and the convened grand jury.

Trump has demanded none of his staff or appointees comply with Congressional subpoenas on impeachment and refuse to give documents requested by the committees. Understandably, the House took the case to court, appearing before Trump appointee Judge Neomi Rao.

Republicans have complained that Democrats are not following the procedure by holding an impeachment vote before the case can move through the courts to subpoena first-hand witnesses that Trump has blocked. Yet, Trump's judge asked Congress why they were coming to the Judicial branch when they had other avenues of getting Trump to comply with the subpoenas.

The last available option to Congress, House General Counsel Doug Letter said, would be to dispatch the Sergeant at Arms to march into the Justice Department with guns blazing.

Letter: "That's stunning. That's just stunning. If this court rules that the House is entitled to this material, the Attorney General is going to say -- no?"

Letter: "I guess what we would do is we would use the main remedy that the House has had from the beginning. We'll send the Sergeant at Arms over to the Justice Department. I cannot imagine that anybody at the Justice Department is going to interfere with him doing his duty as an officer to the House. And he will pick up the grand jury materials, and he will bring them to the House."

Judge Rao: "So you do have some methods of self-help that don't require this court to intervein?"

Letter: "Absolutely. We can send the Sergeant at Arms, and he can go have a gun battle with --"

Judge Rao: "Why not avail yourself of that remedy?"

Letter: "The reason is obvious."

Judge Rao: "Why is it obvious?"

"When was the last time that was done?" another voice can be heard asking but isn't identified.

Letter: "That's why -- again, this was discussed in the first case -- that's why we don't do that anymore. We don't have the Sergeant at Arms go out and arrest people and have a gun battle with Mr. Barr's FBI security detail. Instead, we go to court."

Former federal prosecutor Glenn Kirschner was in the courtroom for the exchange and explained that it isn't often that discussion of two branches of government facing off in a gun battle is considered "light-hearted."

"I don't think it was intended to be serious, and it was really down in the weeds of a legal issue," he explained. "If the court decided that these grand jury materials from the Mueller case can be sort of unsealed and available, that's different from the court ordering the Department of Justice to turn them over. They seem like a difference without a distinction, but they are different things. So, I do think that Mr. Letter was surprised by the question because you have to believe if a federal appellate court orders that, 'Yes, the House is entitled to these Mueller materials,' then naturally the Department of Justice headed up by Bill Barr will simply turn them over."

Kirschner said that given what Barr has done in the past, he's not sure "it wasn't actually a question with some consequences."

Listen to the audio of the court discussion and the analysis by MSNBC in the video below: