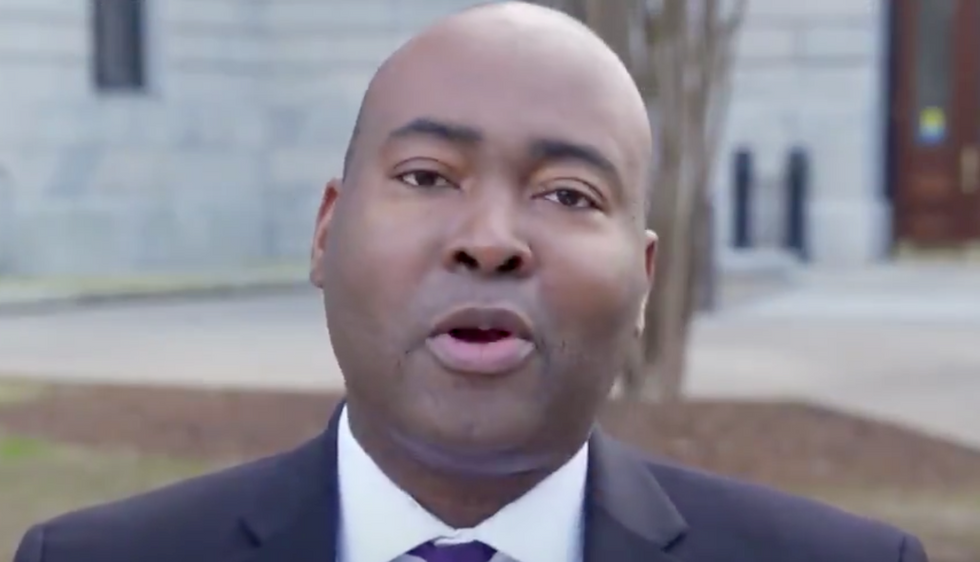 Jaime Harrison is running for Senate as a Democratic candidate hoping to unseat incumbent Lindsey Graham. Sen. Graham, like Sen. Mitch McConnell and the rest of the Republican Party stoolie squad, have fallen into line under the single-most transparently corrupt president in any of our lifetimes. As one of the big proponents of impeaching then President Bill Clinton, back in 1998, Sen. Graham has come under fire over the past year for how starkly contradictory his public statements today when compared to those from 1998. Harrison justifiably has decided to use Graham’s words against him, tweeting out from his personal account, Harrison posted a video, with “Official Impeachment Statement:” as the header.

In the video we see Harrison speaking to the camera, reading a statement from a paper in his hands.

HARRISON: For the good of the nation, I think, it would serve us all well if we thought about this one idea. After we’re all dead and gone,

It is here, on the second sentence, that we can hear Sen. Graham’s wilting southern accent come up behind Harrison’s, as it is revealed to be Sen. Lindsey Graham’s statement on impeachment, from Dec. 22, 1998, to reporters somewhere underneath the Senate’s chambers.

GRAHAM: [continued] do you have something to present history that will withstand scrutiny, where everybody had a chance to have their say, in a reasonable way, in a focused way, so that history would judge us based on the facts, and based on a meaningful hearing not just on the political moment.

The image fades back to Harrison reading the end of Graham’s words.

HARRISON: [continued] And if we think about that, it’s very important to me that we leave behind a legacy that meets the model of American justice.

It may be hard to believe but before Donald Trump there were many Republicans, like Sen. Graham, who used a patina of eloquence in order to drive home their bleak and cynical world views. Now that this mask has been ripped free and the soul of the Republican Party has been revealed to be the monstrous faces of bigotry and greed, it is hard to connect the senator from South Carolina, who spoke so eloquently about impeaching then president Bill Clinton for his extramarital affair, with the senator from South Carolina who has said in no uncertain terms that he will not even pretend to participate in an impartial trial concerning the abuses of power in the Executive Branch of government.

SemDem has been covering a lot of Harrison’s moves in his trip toward the Senate, and you can learn a lot more about Harrison’s chances and stances here.