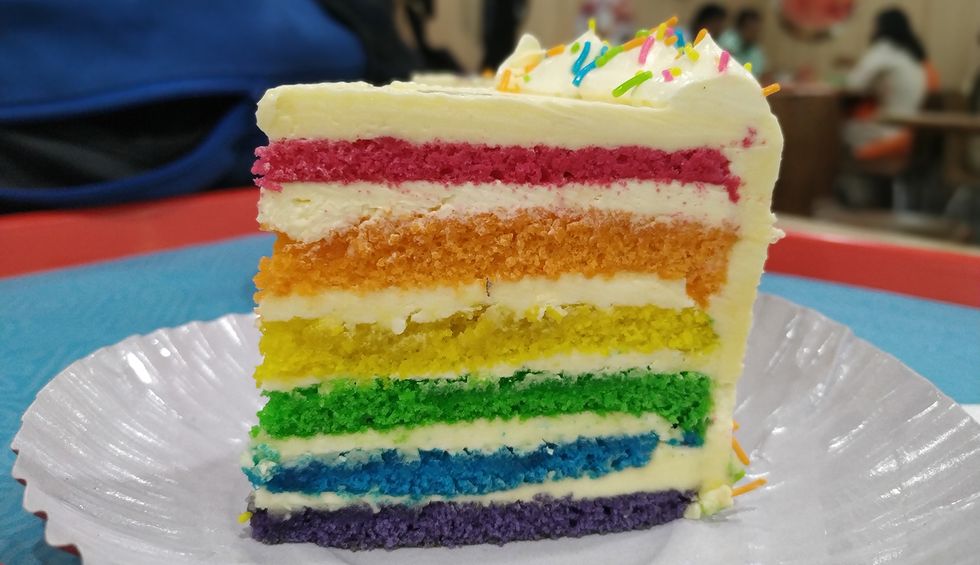 If there’s one thing that’s synonymous with birthdays, it’s having a birthday cake. According to Kimberly Alford, however, a photo of her 15-year-old daughter, Kayla, sitting with her colorful birthday cake while wearing a sweater with a rainbow on it led to her being expelled from Whitefield Academy, a private Christian school in Louisville, Kentucky, as reported by the Washington Post.

How did a seemingly innocent birthday celebration at a Texas Roadhouse lead to this teenager being kicked out of school? Alford says she posted the picture on her Facebook. “She was happy, she looked beautiful,” Alford told Wave 3 News. “You know, of course as a mom, I took her picture of her blowing out her candles and I posted that on my Facebook page.”

Alford acknowledges to the Post that she knows rainbows are often symbols for the LGBTQ community. While the shirt and cake appear to be rainbows, they aren’t explicitly the rainbow Pride flag. Either way, Alford says that her daughter’s shirt and cake were entirely coincidental. Alford told the Post she gave the school her receipt from the cake, which described the cake as having “assorted colors,” not even “rainbow.” Basically: Sometimes a rainbow is just a rainbow.

She believes someone sent the image to the school, which she says resulted in her receiving an email on Jan. 6 from school officials with a picture of her Facebook post attached. The message? According to Alford, the letter notified her that her child was no longer a student, effective immediately.

"When I called the head of the school to discuss it with him, I was quite emotional," Alford explained to ABC News in an interview. "He told me, 'Kim, the sweater, the cake, it just kind of represents gay pride … when you saw the cake you should have refused it.'"

Alford says she filed an appeal and was denied. Alford says that her daughter, who has been a student there since the sixth grade, has had a few disciplinary issues before. What sort of issues? Shaving one side of her head and having an e-cig on campus. And now, apparently, rainbow cake.

The school referred to violations of student conduct codes “numerous times over the past two years” in a statement it emailed to ABC News. The statement claims the freshman was not expelled “solely for a social media post.”

“Inaccurate media reports are circling stating that the student in question was expelled from our school solely for a social media post,” a statement from the school to NBC News reads. “In the fall, we met with the student to give her a final chance to begin to adhere to our code of conduct. Unfortunately, she did not live up to the agreement.”

The school’s handbook says in part, “The atmosphere or conduct within a particular home may be counter or in opposition to the Biblical lifestyle the school teaches. This includes, but is not limited to, sexual immorality, homosexual orientation, or the inability to support Biblical standards of right and wrong.”

While the expulsion appeal was denied, Alford says the school did agree to remove it from her daughter’s transcript. Instead, it’s been changed to a “voluntary withdrawal,” according to the Post, and her daughter is now attending a public high school.

Whitefield is far from the only school to make the news for this sort of incident. For example, a single mother of two in Ohio alleges that a Christian school expelled her children because they have different fathers and she’s unmarried. An openly gay student at a Catholic high school alleges the school threatened to expel him over his support of LGBTQ rights. And of course, we can’t talk about Christian schools with homophobic policies without remembering Mike Pence’s wife, Karen Pence, teaching art at one.

LGBTQ youth deserve better than this, and frankly, all students, LGBTQ or not, deserve a minimum of acceptance, freedom, and self-expression, too.