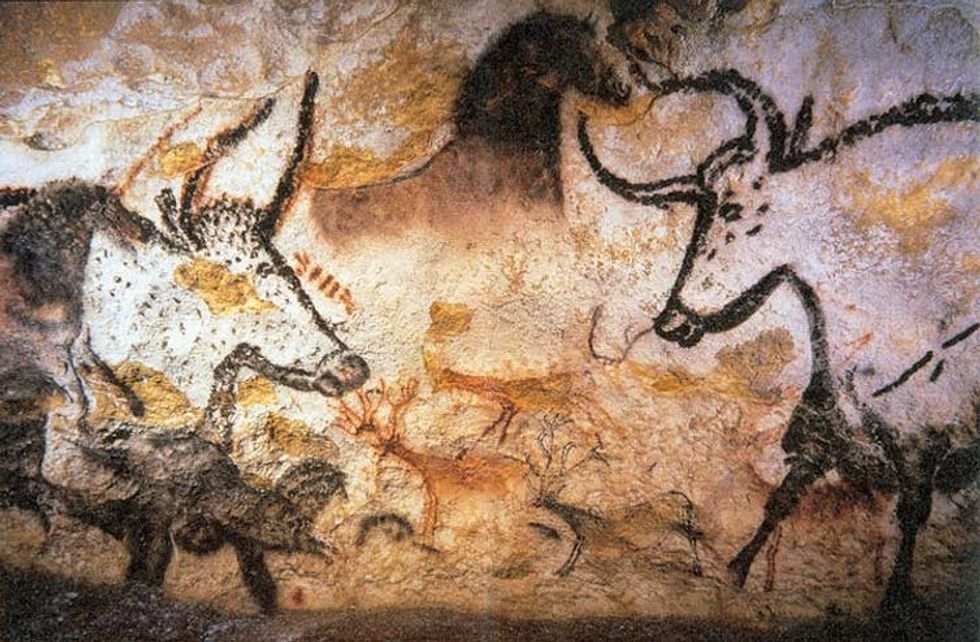 For 95% of our species’ history, we didn’t farm, create large settlements or complex political hierarchies. We lived in small, nomadic bands, hunting and gathering. Then, something changed.

We transitioned from hunter-gatherer life to plant harvesting, then cultivation and, finally, cities. Strikingly, this transition happened only after the ice age megafauna – mammoths, giant ground sloths, giant deer and horses – disappeared. The reasons humans began farming still remain unclear, but the disappearance of the animals we depended on for food may have forced our culture to evolve.

Early humans were smart enough to farm. All groups of modern humans have similar levels of intelligence, suggesting our cognitive capabilities evolved before these populations separated around 300,000 years ago, then changed little afterwards. If our ancestors didn’t grow plants, it’s not that they weren’t clever enough. Something in the environment prevented them – or they simply didn’t need to.

Global warming at the end of the last glacial period, 11,700 years ago, probably made farming easier. Warmer temperatures, longer growing seasons, higher rainfall and long-term climate stability made more areas suitable for cultivation. But it’s unlikely farming had been impossible everywhere. And Earth saw many such warming events – 11,700, 125,000, 200,000 and 325,000 years ago – but earlier warming events didn’t spur experiments in farming. Climate change can’t have been the only driver.

Human migration probably contributed as well. When our species expanded from southern Africa throughout the African continent, into Asia, Europe and then the Americas, we found new environments and new food plants. But people occupied these parts of the world long before farming began. Plant domestication lagged human migration by tens of millennia.

Rye, one of the first crops.

If opportunities to invent farming already existed, then the delayed invention of agriculture suggests our ancestors didn’t need, or want, to farm.

Agriculture has significant disadvantages compared to foraging. Farming takes more effort and offers less leisure time and an inferior diet. If hunters are hungry in the morning, they can have food on the fire at night. Farming requires hard work today to produce food months later – or not at all. It requires storage and management of temporary food surpluses to feed people year round.

A hunter having a bad day can hunt again tomorrow or seek richer hunting grounds elsewhere, but farmers, tied to the land, are at the mercy of nature’s unpredictability. Rains arriving too soon or too late, droughts, frosts, blights or locusts can cause crop failure – and famine.

Agriculture has many disadvantages over hunting.

Agriculture has military disadvantages as well. Hunter-gatherers are mobile and can travel long distances to attack or retreat. Constant practice with spears and bows made them deadly fighters. Farmers are rooted to their fields, their schedules dictated by the seasons. They are predictable, stationary targets, whose food stockpiles tempt hungry outsiders.

And having evolved to the lifestyle, humans may simply have loved being nomadic hunters. The Comanche Indians fought to the death to preserve their hunting lifestyle. The Kalahari Bushmen of southern Africa continue to resist being turned into farmers and herders. Strikingly, when Polynesian farmers encountered New Zealand’s abundant flightless birds, they largely abandoned agriculture, creating the Maori moa-hunter culture.

Yet something changed. From 10,000 years ago onward, humans repeatedly abandoned the hunter-gatherer lifestyle for farming. It may be that after the extinction of mammoths and other megafauna from the Pleistocene epoch, and the overhunting of surviving game, the hunter-gatherer lifestyle became less viable, pushing people to harvest and then cultivate plants. Perhaps civilisation wasn’t born out of a drive to progress, but disaster, as ecological catastrophe forced people to abandon their traditional lifestyles.

As humans left Africa to colonise new lands, large animals disappeared everywhere we set foot. In Europe and Asia, megafauna like wooly rhinos, mammoths, and Irish Elk vanished around 40,000 to 10,000 years ago. In Australia, giant kangaroos and wombats disappeared 46,000 years ago. In North America, horses, camels, giant armadillos, mammoths and ground sloths declined and disappeared from 15,000 to 11,500 years ago, followed by extinctions in South America 14,000 to 8,000 years ago. After people spread to the Caribbean Islands, Madagascar, New Zealand and Oceania, their megafauna vanished as well. Megafaunal extinctions inevitably followed humans.

Harvesting big game like horses, camels and elephants produces a better return than hunting small game like rabbits. But large animals like elephants reproduce slowly, and have few offspring compared to small animals like rabbits, making them vulnerable to overharvesting. And so everywhere we went, our human ingenuity – hunting with spear-throwers, herding animals with fire, stampeding them over cliffs – meant we harvested large animals faster than they could replenish their numbers. It was arguably the first sustainability crisis.

With our hunting prey gone, we were forced to invent civilisation.

With the old way of life no longer viable, humans would have been forced to innovate, increasingly focusing on gathering, then cultivating plants to survive. This let human populations expand. Eating plants rather than meat is a more efficient use of land, so farming can support more people in the same area than hunting. People could settle permanently, build settlements, then civilisations.

The archaeological and fossil records tell us our ancestors could have pursued farming, but did only so after they had little alternative. We probably would have continued hunting horses and mammoths forever, but we were just too good at it, and likely wiped out our own food supply.

Agriculture and civilisation may have been invented not because they were an improvement over our ancestral lifestyle, but because we were left no choice. Agriculture was desperate attempt to fix things when we took more than the ecosystem could sustain. If so, we abandoned the life of ice age hunters to create the modern world, not with foresight and intent, but by accident, because of an ecological catastrophe we created thousands of years ago.