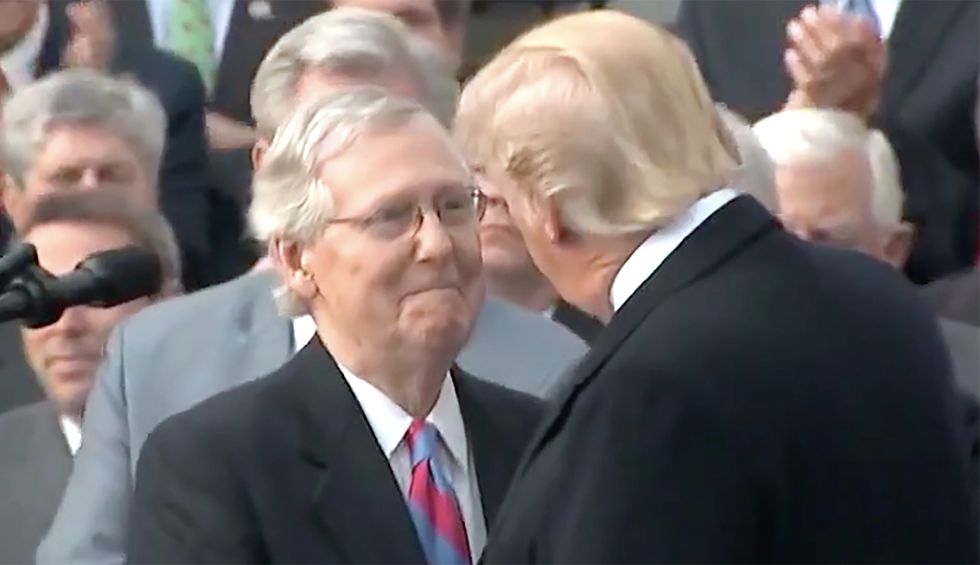 Throughout the Ukraine scandal, Senate Majority Leader Mitch McConnell has been one of President Donald Trump’s strongest allies — making it painfully clear that he will be coordinating with the White House during his impeachment trial. McConnell, Washington Post opinion writer Greg Sargent stresses in his January 21 column, has committed himself to “shielding Trump from accountability” — and an impeachment-related legal brief submitted by Trump’s lawyers will help him do it.

“Trump’s legal team has submitted a lengthy brief in his defense that is packed with the same old nonsense,” Sargent explains. “It insists Trump pressed Ukrainian President Volodymyr Zelensky to investigate Joe Biden’s activities in Ukraine out of genuine concern over corruption — a reference to Biden’s work as vice president to oust a Ukrainian prosecutor, supposedly to protect his son Hunter.”

Pro-impeachment House Democrats have been asserting that last summer, Trump withheld military aid to Ukraine and demanded an investigation of the Bidens.

The brief, Sargent notes, “argues that two of the people who spoke directly to Trump about the freezing of military aid” to Ukraine “both exonerated him.” The people are Sen. Ron Johnson of Wisconsin and Ambassador Gordon Sondland.

Sondland, according to Sargent, “personally conveyed the extortion demand to Ukraine but said he only ‘presumed’ the money was conditioned on announcing investigations and testified Trump told him ‘no quid pro quo.’” And Johnson, Sargent writes, “asserted Trump personally told him he’d ‘never’ demand such a quid pro quo, after Johnson had expressed deep concern about the frozen aid.”

Sargent writes, “The argument that Sondland and Johnson exonerated Trump is nonsense. In the same call where Trump supposedly told Sondland ‘no quid pro quo,’ Trump also told him to convey to Zelensky that he must do Trump’s bidding — even as Trump continued withholding the money.”

Ryan Goodman, a law professor at New York University, told Sargent, “The brief carefully relies on these third-person accounts to claim what the president did or did not say. The irony is the Sondland call is actually one of the most incriminating parts of the record. When Sondland told other officials of this very call, it set off alarm bells.”

Sargent goes on to explain, “The whole reason Sondland and Johnson are the only people ‘on record’ — that is, the only people who directly discussed the frozen aid with Trump who testified to the House impeachment inquiry — is because Trump blocked all the other people who also discussed this with him from testifying…. If GOP senators vote against hearing any witnesses, they will be carrying out Trump’s bidding once again.”