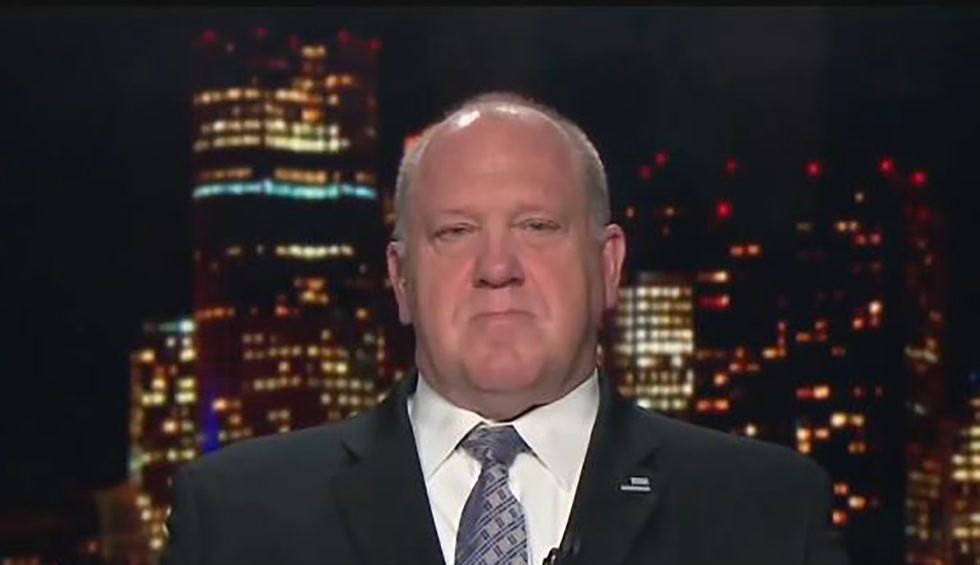 Tom Homan, a former Trump administration official who served as acting ICE director for more than a year, claimed Wednesday to "Fox & Friends" co-host Brian Kilmeade that the president's immigration policies have led to less rapes across the country.

"Look, I think you're going to get 400 miles of wall by the end of the year. I think this president means what he says," Homan told Kilmeade. "And look, I talked about the 72 percent decline [in undocumented immigration]."

"What people aren't talking about, Brian, is how many women weren't raped when 72 percent decline in illegal immigration," he continued. "How many children haven't died? How many millions of dollars did the cartels not make? So that's something that no one's talking about."

Earlier in the interview, Homan hypothesized about why immigration did not receive more attention during Tuesday night's Democratic primary debate in Iowa.

"This president on his own has gotten illegal crossings down 72 percent from the high in May. What are they going to say?" Homan asked Kilmeade. "They had failed. The president has taken them to school without their help and despite their resistance."

Homan's false claim that undocumented immigrants were more likely to commit rape strongly echoed the famous language of Donald Trump's campaign launch in 2015. After descending the golden escalator in Trump Tower, the future president falsely claimed that undocumented immigrants were "bringing drugs. They're bringing crime. They're rapists. And some, I assume, are good people."

Homan himself has a long history of making controversial and racist comments about immigrants. These include: incorrectly implying that an undocumented immigrant was responsible for the 2017 California wildfires; inaccurately stating that "nine out of every 10" immigrants picked up by ICE "have criminal records"; and allegedly using a slur while glorifying violence against immigrants.

Since joining Fox News, Homan has also called for the criminalization of overstaying a visa, which is currently a civil violation; has supported detaining asylum seekers in tent cities; ahas ccused Democrats of helping Mexican criminal organizations and cartels; has called for the rounding up and deportation of 100,000 immigrant families; and has denied that migrant children were being kept in cages.

In 2018, Salon spoke with Sen. Jeff Merkley, D-Ore., who said that Trump administration officials "don't want people to know that they have this system of child prisons, that they're locking up children for far more than 20 days, that they're slow-walking their release even when they have sponsors who have gone through the full background check system because they want to keep them in prison rather than releasing them to homes and schools and parks, where they should be. This is all part of an effort by the administration on their policy from May to say to the world, 'Do not come to our borders if you're fleeing oppression because we will inflict trauma on you and your children.'"

You can watch the full video of Homan's "Fox & Friends" interview below, via Media Matters: