'He's desperate': Trump rants about impeachment 'con job' as McConnell admits he doesn't have the votes to block witnesses 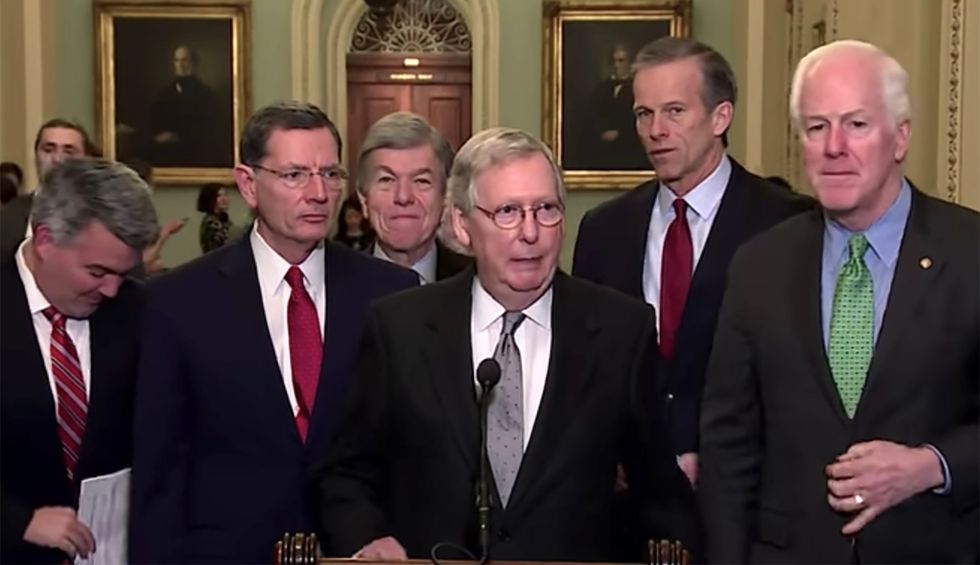 President Donald Trump fired off a pair of tweets Tuesday night ranting about what he called the "impeachment hoax" and "political con job" shortly after Senate Majority Leader Mitch McConnell reportedly admitted in a closed-door meeting with GOP lawmakers that he doesn't have the votes to stop witnesses from being called to testify in the ongoing trial.

"No matter how many witnesses you give the Democrats, no matter how much information is given, like the quickly produced Transcripts, it will NEVER be enough for them," Trump tweeted. "They will always scream UNFAIR."

In a separate tweet hours later, Trump asked why former national security adviser John Bolton—the most prominent potential witness with first-hand knowledge of the president's actions—didn't "complain about this 'nonsense' a long time ago, when he was very publicly terminated."

Bolton alleges in an unpublished book manuscript that Trump said he wanted to withhold congressionally approved aid to Ukraine until that country agreed to launch investigations into former Vice President Joe Biden and his son, Hunter.

The president's tweets came after McConnell reportedly told fellow Republican senators that he lacks the votes to continue blocking witnesses for the Senate trial, stonewalling that Democratic lawmakers and other critics have described as a cover-up. Just four Senate Republicans would have to vote with Democrats to approve witnesses.

According to the Wall Street Journal, McConnell told Republicans following the final day of presentations from Trump's defense team that the "vote total wasn't where it needed to be on blocking witnesses or documents."

"He had a card with 'yes,' 'no,' and 'maybes' marked on it, apparently a whip count, but he didn't show it to senators," the Journal reported. A vote to approve witnesses for the Senate trial is expected to take place Friday.

"The pressure is working," declared progressive advocacy group Indivisible, which has been driving calls Republican senators. "This is huge. We need to hear from Bolton and the other witnesses who know exactly how egregious Trump's abuse of power was."

"This is no time to ease up—keep calling every day until the vote," the group added.