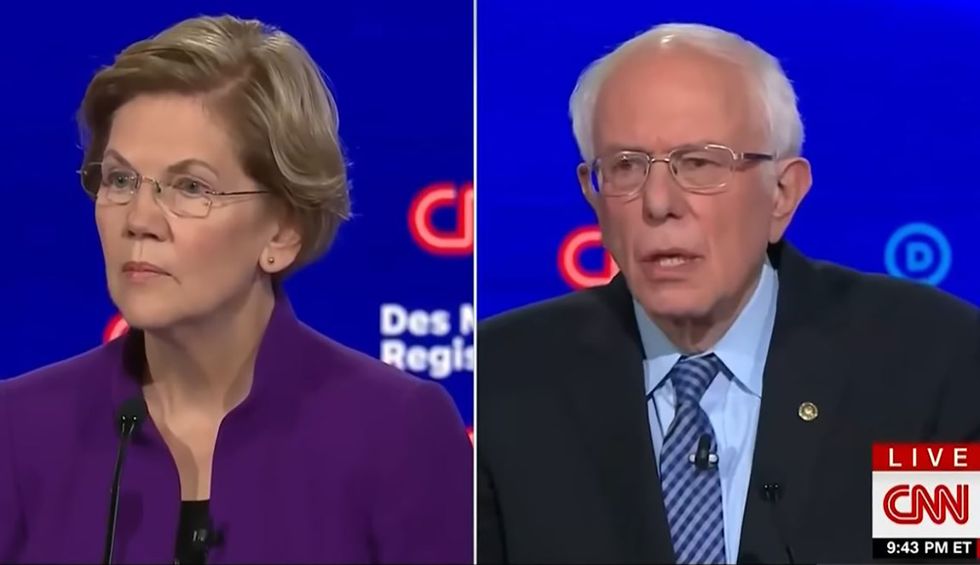 Among the leading contenders for the Democratic presidential nomination, both Sens. Elizabeth Warren and Bernie Sanders hail from states where GOP governors could appoint a Republican replacement to the Senate. That outcome would not only defy the will of voters in Massachusetts or Vermont, but it could also cost Democrats a key vote during the critical first months of a potential Sanders or Warren presidency.

However, there are two ways to lessen this risk dramatically, including one option that would permanently make Senate successions much fairer—and should, in fact, be adopted by every state.

If Warren were to win the White House in November and not leave her current post until Inauguration Day on Jan. 20, 2021, Massachusetts' Gov. Charlie Baker could tap a Republican replacement who’d serve until a special election that wouldn’t be held for about five months. In Vermont, meanwhile, Gov. Phil Scott, if he wins re-election this fall, could name a Republican to succeed Sanders, who similarly would hold the post until a special election that likely wouldn’t take place for another six months.

Either outcome would be unfair: Voters in both states rejected Republican Senate candidates little more than a year ago.

But there’s a simple way to avoid this problem. Democratic legislators can change the law to require the governor to swiftly appoint a temporary replacement from the same party as the outgoing senator (while allowing independents to designate a preferred party). And because Democrats hold supermajorities in both states, they’d be able to override any gubernatorial vetoes.

Half a dozen states, both red and blue, already have a same-party requirement in place for Senate successors. And to prevent an opposite-party governor from picking a Democrat or Republican in name only, all but one of them mandate that the governor choose from a shortlist compiled by the departing senator’s state party committee. That system best honors the wishes of a state’s voters and alleviates any worries over the partisan implications of a senator seeking another office.

Most importantly, it applies equally to both parties: Same-party succession would protect the will of voters whether they elect a Republican to the Senate while a Democrat sits in the governor’s mansion, or a Democratic senator under a Republican governor.

If Democratic lawmakers won’t act, though, both Sanders and Warren have another alternative: resigning early.

It's likely that the contest for the presidential nomination will be effectively over several weeks or even months ahead of the Democratic National Convention, which begins on July 13. If Warren, as the presumptive nominee, were to vacate her seat by June 23, a special election could take place simultaneously with the regularly scheduled November general election.

A concurrent election would ensure that Democrats would be favored to hold her seat, since Massachusetts is certain to go blue at the top of the ticket. It would also avoid the pitfall of low turnout that could plague a special election held on a different date, as we saw in the race that elected Warren’s predecessor, Republican Scott Brown, in January 2010.

Similarly, Sanders could resign early enough to trigger a special election concurrent with the November elections. It’s unclear by what exact date Sanders would have to leave (Vermont’s statutes are vaguely worded, and there’s no relevant precedent). But we do know that a special primary would, by law, take place 60 to 66 days before the Nov. 3 general election, and the earliest possible candidate filing deadline for such an election would be July 28.

If Sanders were therefore to resign by late May or early June, that would likely allow enough time for election officials to make all the necessary preparations to hold a simultaneous special election in the fall.

Legislators in Massachusetts and Vermont should therefore take action to remedy the situation immediately—and their colleagues across the nation should follow suit.