Could there be a benign explanation for why Trump's lackeys were stalking an American ambassador? 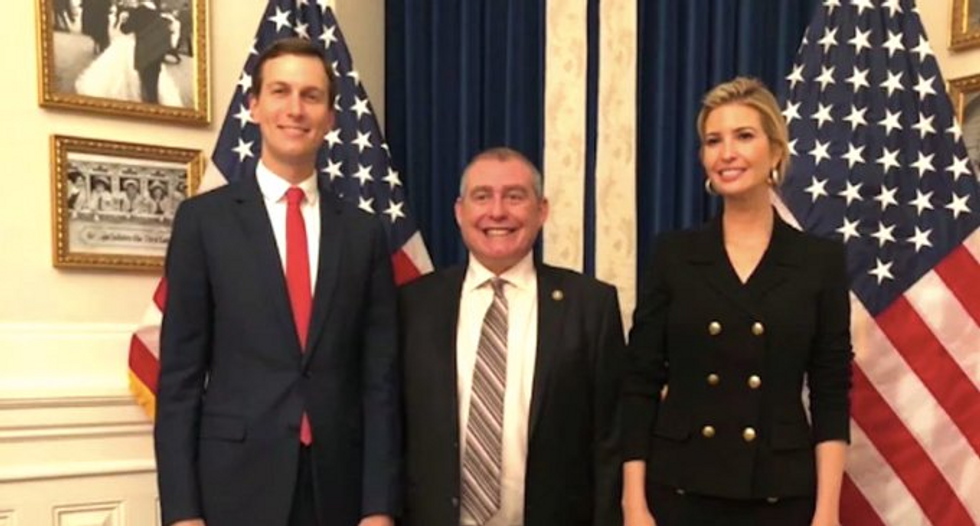 On the eve of the final Democratic debate before the Iowa caucuses, the House Intelligence Committee dropped a bombshell. Documents obtained from Lev Parnas, the shady Ukrainian associate of Rudy Giuliani who laundered and then spread foreign campaign donations to republicans across the country, included a series of text messages with Robert Hyde, a bellicose Trump acolyte who's running for Congress in Connecticut, about then-US ambassador to Ukraine Marie Yovanovich. Hyde told Parnas that he was surprised that Trump hadn't "fired that bitch," said he was tracking her physical location and discussed her personal security detail. In one exchange, Hyde told Parnas that he has Ukrainian contacts that would "help" deal with Yovanovich and asked if Parnas wanted to know the "price" of their services.

As many people on social media noted, the exchanges read like a couple of mobsters plotting some sort of attack. And you may recall that Trump told Ukrainian president Volodymyr Zelensky that Yovanovich was "bad news," and promised that "she's going to go through some things." Yovanovich later testified before Congress that she had been warned that she was in danger by a Ukrainian contact--not by her American colleagues--and that she left the country on short notice fearing for her personal safety.

while Donald Trump has long had ties with the mafia, it is hard to believe that the speculation is accurate and a couple of conservative grifters schemed over Whatsapp to assassinate or otherwise assault a US ambassador, especially given that Trump had the power to simply recall her, which he later did.

As egregious as his disregard for the law has been over the past three years, you just don't want to believe that he or those in his orbit would contemplate such a crime. And it's probably the case that the public would have a hard time even wrapping their heads around such an allegation.  The entire sordid affair, with a crooked Ukrainian prosecutor offering dirt on Hunter Biden in exchange for removing Yovanovich, is hard enough to fully grasp.

But at the same time, it's very hard to imagine a benign explanation for why these hustlers would be tracking Yovanovich's movements and talking about her security arrangements. Many possibilities come to mind short of murder, but they're all nefarious to some degree.

Will we learn the truth? Perhaps. Republicans in Congress seem unperturbed by the texts, but Yovanovich has called for an investigation and Lev Parnas has granted an exclusive interview to MSNBC's Rachel Maddow. Maybe some plausible and non-criminal

explanation for these texts will be forthcoming.