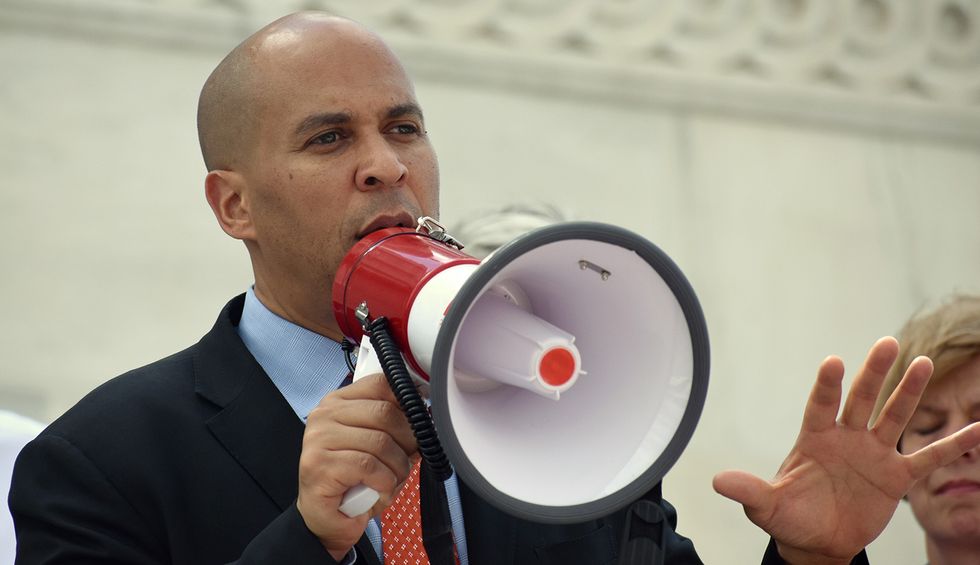 WASHINGTON, DC -- July 25 2017: Senator Cory Booker addresses a crowd of supporters on the Capitol steps after the vote on the motion to proceed.
Joan McCarter
and
Daily Kos
January 13, 2020

Sen. Cory Booker is leaving the 2020 presidential race. "It's with a full heart that I share this news—I’m suspending my campaign for president," he tweeted. "To my team, supporters, and everyone who gave me a shot—thank you. I am so proud of what we built, and I feel nothing but faith in what we can accomplish together."

His announcement video is as classy and upbeat as his campaign was. "It is my faith in us, my faith in us together as a nation, that we share common pain and common problems that can only be solved with a common purpose and a sense of common cause," he said. "So I recommit myself to the work. I can't wait to get back on the campaign trail and campaign as hard as I can for whoever is the eventual nominee and for candidates up and down the ballot."

His departure leaves one person of color on the ballot, the one with independent wealth, Andrew Yang. It remains populated with random white men including Sen. Michael Bennet (yeah, him, he's still there) and the two who can keep spending their way onto the stage, Tom Steyer and Michael Bloomberg. That's an issue this party is going to have to reckon with. But for now, let's thank Sen. Cory Booker for bringing his enthusiasm, his integrity, and his heart to this race.

Forgot that Massachusetts Gov. Deval Patrick is still “in” the race. For whatever that’s worth.