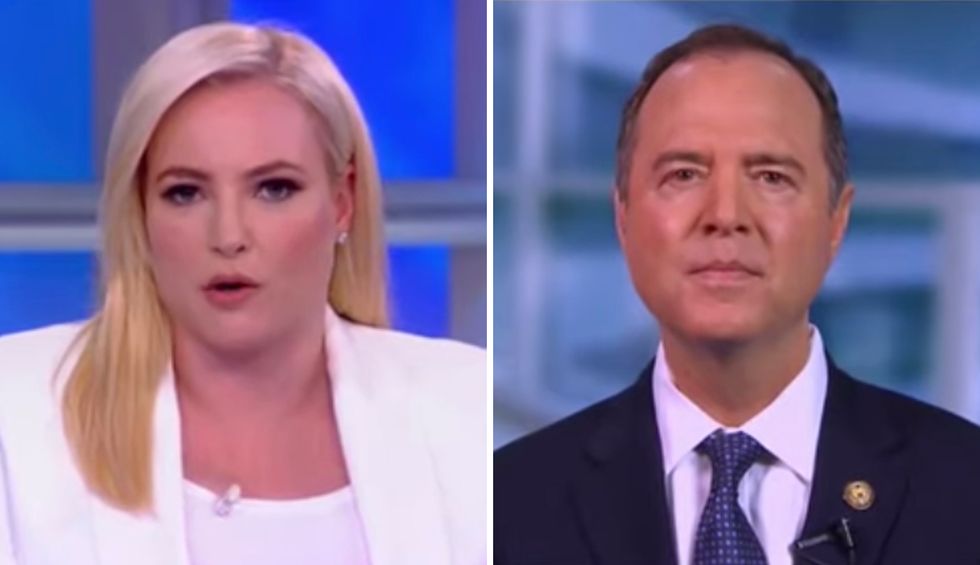 The California Democrat appeared Monday on the daytime talk show, where he addressed the upcoming Senate impeachment trial of President Donald Trump over his efforts to pressure Ukraine to investigate his political rival.

“Ethics aside,” McCain began, “impeachment is a deeply political process and given the intense divide over the issue and the current standoff you guys are having, do you think just purely political was this a good political move for Democrats, and is there any indication that this has damaged President Trump? Because poll numbers say that it hasn’t.”

Schiff explained that polling showed Americans had been persuaded by the evidence turned up in the Democratic-led impeachment inquiry.

“If you’re going to look at the poll numbers,” he said, “what you’ll see over the last three months is the country moving from a majority of Americans believing that we shouldn’t even have an impeachment investigation to overwhelming support for the investigation and a majority, although a narrow majority, of Americans saying that the Senate should convict and remove the president from office. So that’s been a pretty substantial change.”

“In terms of what impact it will have in November, I really can’t say,” Schiff continued. “That’s not a question, frankly, I’ve been asking myself because I don’t think that’s my role. I think we in the House had to determine is this the right thing to do, is this the constitutionally required thing to do.”

“What convinced me, Meghan — and you may recall I was not eager to go down the road to impeachment — is when the president committed this latest and most egregious misconduct, the shakedown of the Ukrainian president, withheld military support to an ally at war and was on the phone literally a day after Bob Mueller testified, the day after the president believed he had escaped accountability for the first foreign interference to help his election, he was back at it again,” Schiff added. “That told me that he believes he is above the law, unaccountable, and we needed to move forward. Even if the Senate won’t do their constitutional duty, we in the House need to do ours.”

The audience loudly cheered Schiff’s conclusion, and McCain pressed him to defend the political benefits of holding a lengthy impeachment trial.

“I mean, I hear your side of the argument that President (Bill) Clinton’s impeachment trial lasted only a month, and if that’s the case Senate Democrats who are running for president in 2020 are going to be holed up on the Hill instead of campaigning well into the first two primaries,” she said. “Say what you will about the constitution and duty, this will hurt Democrats politically. Do you disagree?”

“If senators are doing their job, if they are being impartial jurors, if they are doing their duty under the Constitution, that ought to inure to their benefit,” he said. “I’ve always felt that the best campaign was simply doing a good job, and I don’t think voters are going to hold it against senators for taking the impeachment of the president of the United States seriously, so I don’t think it should be an impediment to them.”

“But more important, I don’t think it’s a question of, say what you will about the Constitution,” Schiff added. “I think it is our duty to uphold the Constitution, and if we allow a president to behave like this, if we allow a president, this president or any other, to seek foreign help, to coerce foreign help in a U.S. election, if we let a president obstruct any investigation into their own wrongdoing, that is going to have enormous repercussions. We’re going to have to expect a far greater degree of corruption and malfeasance not only with this president but any in the future. There’s a lot at stake here and if it means that senators are off the campaign trial for a couple more weeks, I think it’s worth the trade.”