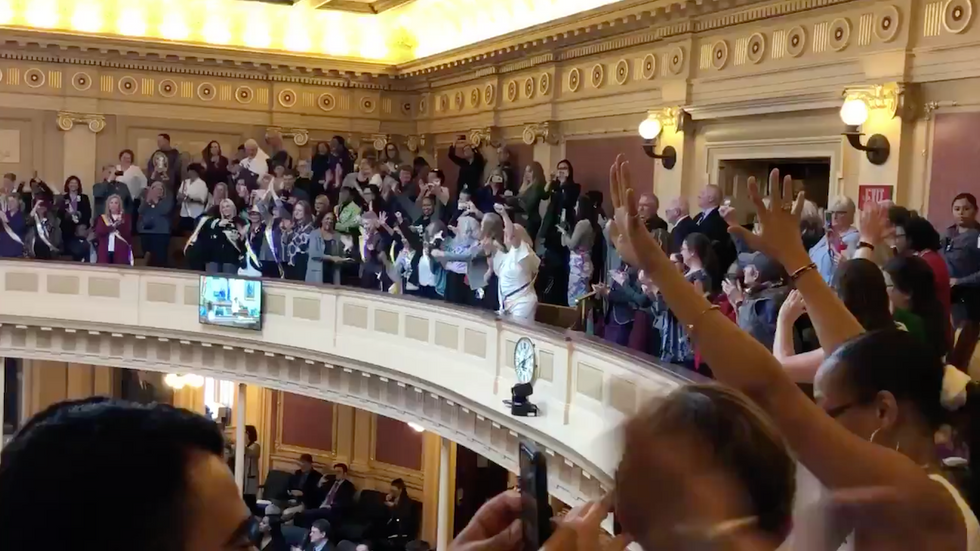 Women's rights advocates celebrated Wednesday as the Virginia legislature became the 38th in the nation to approve the Equal Rights Amendment, nearly 100 years after activists first called for equality between men and women to be enshrined in the U.S. Constitution.

The approval of the Equal Rights Amendment (ERA) by Virginia's state Senate and House means that the required three-quarters of U.S. states have now voted to ratify the amendment, which was passed by Congress in 1972.

The law aims to constitutionally guarantee the same legal rights regarding pay equity and other workplace discrimination to all Americans regardless of sex. It also provides protections for women from domestic abuse and pregnancy discrimination.

"For the women of Virginia and the women of America, the resolution has finally passed," said Eileen Filler-Corn, the first female state House speaker in Virginia's history, as the amendment was approved.

Although the approval of the ERA was celebrated as an historic achievement, for the time being the amendment's step forward is largely symbolic.

As Virginia's newly Democrat-controlled legislature was debating the amendment last week, President Donald Trump's Justice Department issued a statement saying that because a 1982 deadline for ratification passed with only 35 states approving the ERA at the time, it is too late to add the amendment to the Constitution.

Assistant Attorney General Steven Engel wrote that Congress must start the process of ratifying the ERA over again and once again gain the approval of 38 states. The process could be further complicated by the fact that legislatures in Idaho, Kentucky, Nebraska, Tennessee, and South Dakota have rescinded their earlier approval of the ERA in recent years.

Pro-ERA groups including Equal Means Equal filed a federal lawsuit in Massachusetts earlier this month arguing that the deadline was not constitutionally binding.

"We are not surprised that the Trump administration acted swiftly to declare its opposition to the Equal Rights Amendment," Wendy Murphy, a lawyer for Equal Means Equal, told ABC News following the DOJ's statement. "This development makes our lawsuit even more urgent."

According to The Washington Post, "several efforts are underway on Capitol Hill to either extend or restart the ratification process."

ERA advocates have also argued that the rescissions of the five states are not constitutionally sound, but courts have yet to rule on the subject.

Despite the uncertainty over when Virginia's approval might lead to a constitutional amendment, women's rights advocates applauded the state for "making history."

Virginia made history today. This would not be possible without the voters who turned out last year to flip the Vir… https://t.co/hPPJXrj0mu
— Kamala Harris (@Kamala Harris) 1579119362.0

The Equal Rights Amendment is now ratified in 38 states! Women have been waiting for the #ERA to meet this Consti… https://t.co/ssdjN1HXwH
— Lauren Underwood (@Lauren Underwood) 1579118635.0

Elections have consequences: Not only did Virginia @MomsDemand’s GOTV work help usher in a gun sense majority, but… https://t.co/ZL6mk7IC05
— Shannon Watts (@Shannon Watts) 1579103569.0

In her speech in favor of passing the amendment, state Sen. Mamie Locke rejected the claims by ERA critics that the law cannot be added to the Constitution.