Why impeachment matters, regardless of the outcome 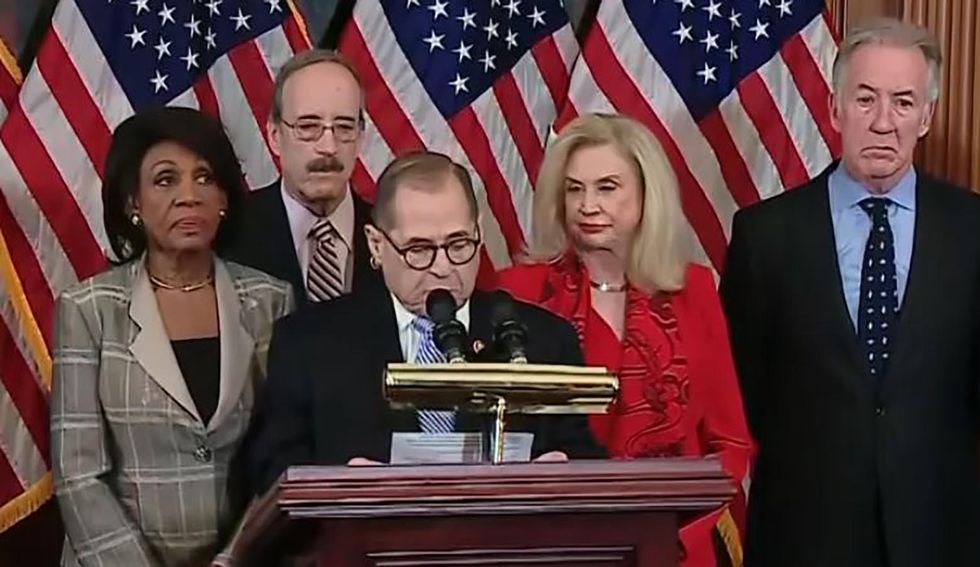 As I’m writing this, the House Judiciary Committee has unveiled two articles of impeachment against President Trump which, according to my awesome powers of precognition, are going to get approved by the U.S. House of Representatives only to get voted down later in the Senate.

Snark aside: The only area of ambiguity so far has been how many articles of impeachment the Democrats would draw up, even though the House leadership was notoriously skittish about doing so until Trump’s egregious extortion of Ukraine President Volodymyr Zelensky was exposed in September. Most analysts believe the Republicans will vote to protect their leader, facts be damned.

So why are we doing this? While it’s highly unlikely Trump will be removed from power before the 2020 election, there are a couple arguments to be made that impeaching him serves a higher purpose, even if the outcome is most likely a foregone conclusion.

One is a moral argument. The language in the Constitution lays out Congress’ sole authority to impeach and remove the president and other officers of the federal government. The framers’ intent to hold the president accountable stemmed not just from idealism, but from a very real fear that the head of state could be subservient to corruption by a foreign power, hence the “treason, bribery, or other high crimes and misdemeanors” language in Article 2, Section 4. The English Civil War and Stuart Restoration provided the founders a then-recent example of heads of state (King Charles I and II) working with the enemy (France) to subvert Parliament.

The framers sought to avoid a repeat of that experience. And yet, Donald Trump appears to be exactly the sort of president they had in mind when they wrote the impeachment clause: corrupt, criminal and willing to sacrifice national security for his personal and political interests. By definition, he should be impeached, and if he isn’t, then we might as well give up and admit that the president is above the law. Because if not him, then whom?

But with today’s polarized environment, there’s a risk that the impeachment process will be seen as not just partisan politics, but nothing more than political theater. What is to stop a future Republican-controlled House from automatically working to impeach a Democratic president, out of pure spite? (One could argue the impeachment of Bill Clinton was one such example of an investigation in search of a crime, but Clinton was, in fact, impeached on a charge of lying to a federal investigator, something which Trump is almost certain to have done to Special Counsel Robert Mueller.)

That could happen, but the more important question is directed at the rest of us who watch from the sidelines: What can we do about this if impeachment won’t stop Trump, since the chance impeachment will deter Trump from doubling down on his lawlessness is effectively zero? Should we do anything, or just go into the election voting for who we planned to, as if none of this mattered? Most polls show now that most people made up their mind about Trump and the impeachment process a while ago—support (or lack thereof) has been remarkably consistent since the beginning, with the only shift occurring when the Ukraine scandal broke in September.

Certainly, the Republicans’ arguments in defense of the president have amounted to little more than denying facts that have been thoroughly documented and testified to, for regurgitation on Fox News and the right-wing blogosphere. Short of a John Dean-style explosive revelation on television, the needle is unlikely to move very far in one direction or the other, regardless of what happens in the impeachment proceedings.

But there’s another argument as to why impeachment is necessary: Rather than let the impeachment process fade and become background noise to the 2020 election, it makes good political sense to keep on beating that drum. Here’s why.

But electing a president is not the only deal on the table. Stopping Trump is the top priority, but ensuring that the Trumpists in government lose wherever they hold power is just as important if we ever want to undo the damage already done to the country. That means protecting the House, taking the Senate, reversing Republican court-packing, and carrying the fight forward into the redistricting battles of early 2021 and the statehouse elections later that year. If progressives want to win not just a battle, but the entire war, they’ll have to both defeat Republicans and pressure moderate Democrats to do the right thing, while laying the groundwork for the next generation of progressive leaders.

If Democrats, and especially the progressives in the party, can’t do that, then even winning the presidency may be a short-term victory. And right now, the Republicans have a deep institutional advantage.

The reason we’ve come to this point is that a movement based on White supremacy, robber-baron capitalism, and intolerant religiosity has gained control over one of the two political parties, and the other party is just now (mostly) waking up to this fact.

It doesn’t really matter when this started: whether it’s the natural extension of the Tea Party, or stems from Newt Gingrich’s drive to delegitimize any Democratic rule, or even from the earlier paranoid conspiracy theories of the John Birch Society (which is still around, by the way) or other fringe groups.

What matters is that the far-right has decades of experience mobilizing in communities, getting people elected to school boards and town councils, where they try to ban books or police bedrooms, which creates a deep back-bench of talent to later rise up to state legislatures and ultimately to Congress and the federal government.

There also is an ecosystem of right-wing think tanks, foremost among them the Federalist Society, whose sole purpose is to develop a well of legal talent and provide their young recruits with career guidance and a nationwide network bound by ideology. Current Supreme Court Justices Clarence Thomas, Samuel Alito, Neil Gorsuch and Brett Kavanaugh, and Chief Justice John Roberts are members of or enjoyed the support of the Society. And there are many wealthy patrons, notable among them Charles Koch and his late brother David Koch, who have funded those think tanks and insurgent candidates, especially since the 2010 Citizens United Supreme Court ruling removed many restrictions on dark money in campaigns.

The right laid down the foundations of this movement years ago, and is now reaping the rewards. The Trump Administration has been rightly criticized for being little more than a wealth-protection and enhancement scheme for the president, his family and fellow billionaires, but the political victories they’ve achieved have included destroying the apparatus of a regulatory state, and ramming through a record number of under- and un-qualified judges to lifetime appointments in the federal courts, where they will influence society and the law for decades to come, regardless of who sits in the Oval Office.

The 2018 midterm elections were proof that local organization matters, as Democrats replaced party stalwarts with young progressives and flipped formerly Republican districts into Democratic ones. A few off-year elections in which a few key governor’s races and statehouses also turned blue pointed to the momentum Democrats have going into 2020.

They’ll need to maintain that energy. There needs to be a much deeper bench of progressive talent to draw from if today’s wins are to be sustainable. The most reactionary elements of the right have been working on this since the 1980s. If progressives don’t take charge on building that movement now, all their recent wins will prove to be temporary.

More than anything else, the historically unpopular Trump Administration has proved to be a rallying point for the left. The impeachment process should add more fuel to that fire, and when Trump is acquitted, we’ll have to work even harder to keep the flame burning. We can’t let ourselves become disappointed and jaded when we lose that the battle. We need to ensure that this will be the costliest pyrrhic victory Trump has won to date.

Chris Winters is a senior editor at YES! He covers economics and politics.