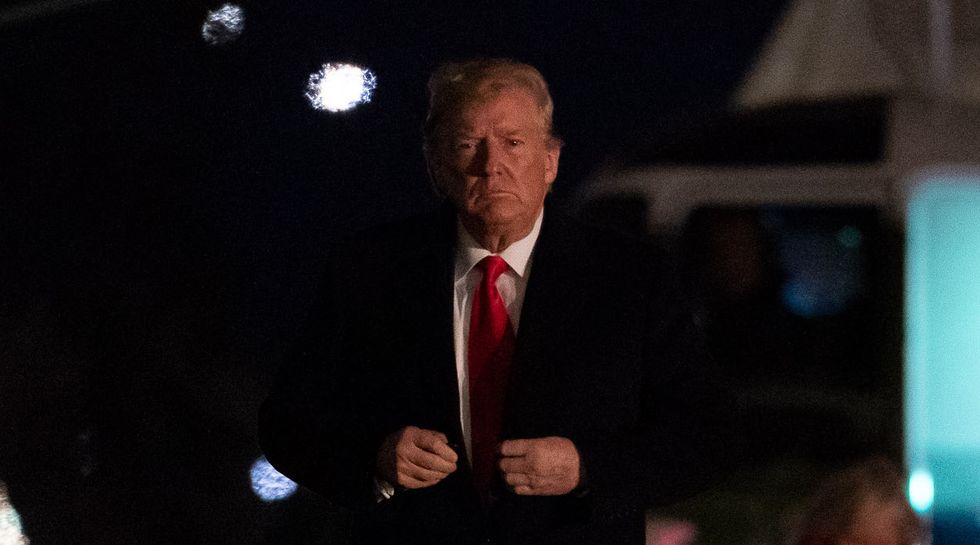 Donald Trump’s claim that if he actually shot someone on Fifth Avenue the NYPD cannot investigate him will be heard by our Supreme Court. Such are the crazy times we live in.

In fighting a New York City investigation into whether Trump is a serial tax cheat, one of his lawyers argued in October that should he murder someone the local authorities could not even collect evidence. However, lawyer George Consovoy added, Trump could be prosecuted after he leaves office.

Technically, the high court said Friday that it will take up whether Trump’s tax returns and supporting financial records must be turned over to three different investigations.

The deep issue in all three cases is whether the justices will embrace Trump’s claims of being above the law.

The crucial case for Trump is the Manhattan district attorney’s probe. For our Constitution, the crucial cases involve subpoenas issued by a pair of House committees in Washington.

Significantly, the high court is not taking up the most clear-cut case of Trump violating his oath of office with regard to his taxes. The House Ways and Means Committee asked the IRS for six years of Trump’s tax returns under a 1924 anti-corruption law. It says any return requested by the committee chairman “shall” be provided, a right also enjoyed by every president.

Trump claims that he doesn’t have to comply with that law because House Democrats want to embarrass him and have no legitimate legislative purpose.  There is no other known case of the IRS failing to comply with such requests.

Trump Above the Law

The deep issue in the three cases the Court is taking up is whether the justices will embrace Trump’s claims of being above the law. I doubt that, but if the high court proves me wrong our liberties and our republic will be in deep jeopardy.

The two Congressional subpoena cases also go to the heart of our Constitutional system with its three co-equal branches of government.

Repeatedly, Trump has shown his utter contempt for this separation of powers. He has denounced judges who don’t rule as he wishes, a sign of his dictatorial desires. He also claims he is free to ignore any Congressional subpoena he dislikes.

In fighting impeachment, for example, Trump asserts that Congress is acting unconstitutionally. A Dec. 6 letter signed by the White House counsel attacks what it calls “the most unjust, highly partisan, and unconstitutional attempt at impeachment in our Nation’s history.”

However, our Constitution says that the House of Representatives “shall have the sole Power of Impeachment.”

Federal trial and appeals courts have rejected every Trump argument to shield his tax and accounting records.

Significantly, the Manhattan case includes suspected tax cheating when he was a private citizen. No federal court has ever held that a president has immunity from investigation, much less for actions before taking any oath of office.

Indictment and trial are different from investigation. There is a reasonable argument that a sitting president cannot be tried criminally in a state court. The argument is that a  single state or county could tie up the federal government, undoing our Constitution’s scheme.

Professor Laurence Tribe of Harvard, arguably our most eminent Constitutional scholar, says that a president can be indicted, especially for a heinous criminal offense such as murder.

There is fairly broad agreement among leading Constitutional scholars, and even Trump’s own lawyer Consovoy, that a president can be tried once he leaves office.

Unresolved is whether such a delay would let a president run out of the clock on statutes of limitations or whether the time periods would be tolled, legal speak for freezing deadlines for government action.

While still in his 30s, Trump beat four federal grand jury investigations into his connections with corrupt lawyers, real estate figures and railroad interests, as first reported by the late Wayne Barrett in his 1992 book Trump: The Deals and the Downfall. In two cases Trump, with help from the notorious lawyer Roy Cohn, simply ran out of the clock on the grand juries.

Why Trump Wants To Hide Records

What has not been raised in these proceedings over subpoenas for Trump’s tax records, and likely will go on mentioned before the Supreme Court, is that Trump’s past conduct explains why he is fiercely trying to conceal his tax and accounting records.

Trump lost two income tax fraud trials over his 1984 New York state and city tax returns, a story I broke before the election in 2016. Trump falsified one of the returns. His longtime tax lawyer, Jack Mitnick, testifying that while his name was on the return, he did not prepare it. The document in evidence, the only copy known to exist, was a photocopy. A signature can be faked using photocopy technology.

Weeks later I wrote about the mystery of the Trump Soho tower profits, which disappeared into an Icelandic bank under the thumb of a Russian oligarch, a deal that Trump had approved in writing. Trump was due 18% of the profits. The headline: Is A Crook Hiding in Trump’s Taxes?

In addition, Trump went to extraordinary lengths—farcical really—to hide Grand Hyatt Hotel accounting records from the City of New York, a story told in my 2016 biography The Making of Donald Trump. Auditors eventually proved Trump had tried to cheat the city out of almost $3 million in rent.

In the Manhattan case that the Supreme Court has agreed to consider, Trump sued to block the release of eight years of his tax returns and the financial records used to prepare the tax returns by Mazars USA, his accounting firm, and by Deutsche Bank. Mazars and the bank both say they will turn over the records to Manhattan District Attorney Cyrus Vance Jr. if the courts uphold the subpoenas.

During arguments in the Second Circuit Court of Appeals, Federal Judge Denny Chin was skeptical of the argument by Trump’s lawyer that Trump is immune from investigation. “Local authorities couldn’t investigate? They couldn’t do anything about it?… That is your position?”

Two weeks later the federal appeals court held that was not correct. It upheld the Manhattan grand jury subpoenas. Jay Sekulow, another Trump lawyer, immediately announced an appeal to the Supreme Court.

So here we are, our Supreme Court about to consider what the framers of our Constitution considered unthinkable: Is Donald Trump above the law, even the law against murder, just because he is president?

The Supreme Court has agreed to hear all three cases in March with one hour of oral argument. A decision is expected in June.