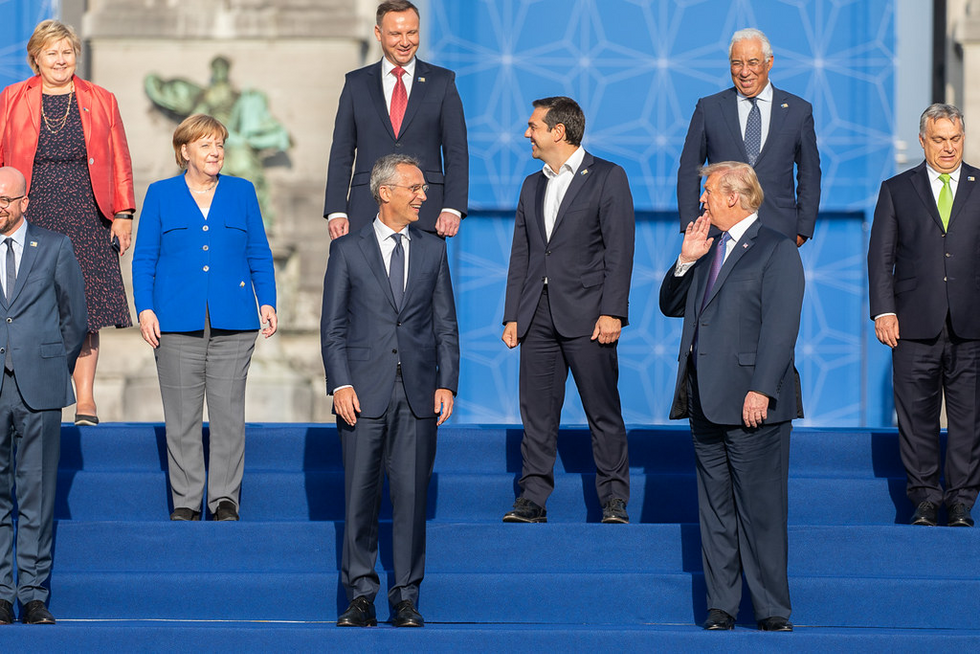 As promised, the House Intelligence Committee released its report on the Ukraine investigation on Tuesday. It was another of those days when everyone on TV was madly reading a pile of documents trying to find any nuggets of new information while at the same time attempting to give the public a sense of the larger narrative. This time there was no William Barr on hand to spin things in favor of the president, so the media managed to tell the real story. It is actually more devastating than anticipated.

To make the whole thing even more frantic and surreal than it already was, on split-screen TV President Trump could be seen in England making an utter fool out of himself and the nation at the NATO summit. He was predictably unable to maintain a sense of dignity or pride, lying and whining at every turn. It was a very strange news cycle, to say the least.

The Intel Committee report was proclaimed by most legal observers to be a very thorough and professional document. In a nutshell, it says:

Trump’s scheme subverted U.S. foreign policy toward Ukraine and undermined our national security in favor of two politically motivated investigations that would help his presidential reelection campaign. The President placed his own personal and political interests above the national interests of the United States, sought to undermine the integrity of the U.S. presidential election process, and endangered U.S. national security.

It also makes a strong case that the president and his henchmen obstructed Congress, intimidated witnesses, became the first administration in history to thoroughly stonewall obstruct an impeachment inquiry, and quite likely lied about that "I want nothing" phone call. It unravels all the byzantine relationships between Fox News lawyers, right-wing journalists and various Ukrainian political figures with their own axes to grind.

In a surprise revelation, it appears likely that the ranking Republican member of the Intelligence Committee, Rep. Devin Nunes, R-Calif., was in on the scheme at least as long ago as last spring. The report includes phone records that indicate Nunes was speaking to Rudy Giuliani and  Lev Parnas, his Ukrainian-born colleague who was recently indicted by the Southern District of New York. Oddly, in all those hearings over the past few weeks during which Nunes ranted and raved about various made-up conspiracies,  he never uttered a word about knowing any of the people involved in all this.

As of Tuesday night, the committee voted for the report to be delivered to the House Judiciary Committee under Chairman Jerry Nadler, D-N.Y., for consideration of impeachment articles. Those hearings begin Wednesday morning.

Meanwhile, since Daddy was out of town, Trump's most obedient servant, Sen. Lindsey Graham of South Carolina, took the opportunity to try to reclaim some self-respect, telling reporters that indeed "it was the Russians" who meddled in the 2016 election. "I'm 1,000% confident that the hack of the DNC was by Russian operatives, no one else," Graham said.

Sen. Mitt Romney of Utah went further, departing from delusional GOP orthodoxy to declare, “I saw no evidence from our intelligence community, nor from the representatives today for the Department of State, that there is any evidence of any kind of that suggests that Ukraine interfered in our elections." It's unlikely these comments mean much, but it's telling that the "Hillary and Ukraine framed Russia and Trump" story — being pitched so hard in recent days by Sen. John Kennedy of Louisiana — may not hold up among the entire Republican caucus. It looks more like they're going with "Trump is just a crusader against corruption wherever he sees it," which needless to say is hilarious.

In case you were wondering if any of this is getting under Trump's skin, it is. Even before the House Intel report was released, he had already lost his composure. Appearing for various photo-ops with world leaders, he spoke at length to the press, making some of the most embarrassing comments he's ever made in a foreign country. (Which is a really high standard.) Rather than taking the wiser course and saying nothing about impeachment, he leaned in hard:

That is a perfect example of projection. They'll be using that example to teach university psychology courses for decades to come.

But our Great Leader was just getting started. During the first of his meetings, he "defended" NATO by criticizing his former BFF, French President Emmanuel Macron, for calling the organization "brain dead." Trump described those comments as "very, very nasty" and "disrespectful," the kind of language he customarily reserves for women who displease him. No doubt that causing many of those watching to spontaneously spit out their beverages at the spectacle of this guy possessing the gall to chastise anyone for being nasty and disrespectful. He later refused to commit to NATO's collective defense pledge if whatever country was under attack wasn't "paid up" on its dues, revealing once again that he remains obstinately ignorant about how NATO funding works.

Later on, when he appeared with Macron, he proclaimed again that most of the ISIS prisoners captured in Syria are Europeans and insolently "offered" to send them to France. Macron wasn't having it and went right back at him, correctly noting that most of the ISIS prisoners are from Arab or Muslim nations and only a small minority are from Europe. The French president also made it clear, in so many words, that Trump's monumental blunder by allowing Turkey to invade northern Syria had made things worse.

Trump also said he still has “confidence” in North Korean dictator Kim Jong-un but then called him "Rocket Man" again. He cozied up to Turkish President Recep Tayyip Erdogan, a source of much angst among the members for his recent public gestures toward Russia.

Trump wasn't done. He offhandedly said he might wait until after the 2020 elections to strike a trade deal with China, sending the stock market plunging.  When asked whether the U.S. supported Iranian protesters who are challenging their government on a large scale, he responded: "I don't want to comment on that, but the answer is no. But I don't want to comment." Both he and Secretary of State Mike Pompeo had publicly stated the opposite the day before.

Then it got better. Trump launched into an incoherent brag about U.S. pillage in Syria, which would be a war crime:

He said that in the future, when there is a "Democrat" president and a Republican Congress, the Republicans will "hopefully" impeach that president. "They’ll do the same thing because somebody picked an orange out of a refrigerator and you don’t like it, so let’s go and impeach him," he said.

That's just a random sample of crazy highlights from the president's first day at the NATO gathering. So, yes, I'd say there's little doubt that the impeachment process is making him even more unhinged than usual. From the reactions of his peers, it appears he has lost whatever bizarre mystique he might have once had:

If you ever wondered what world leaders chat about in private, well here at NATO they’re gossiping about #Trump. L… https://t.co/5hfTLLbqD9
— Joyce Karam (@Joyce Karam) 1575426644.0

Our president is an utter fool. Those guys all know it, and so does the leadership of the Republican Party. Imagine how much better off the whole world would be right now if that party's elected officials would do their constitutional duty and put an end to this nightmare.