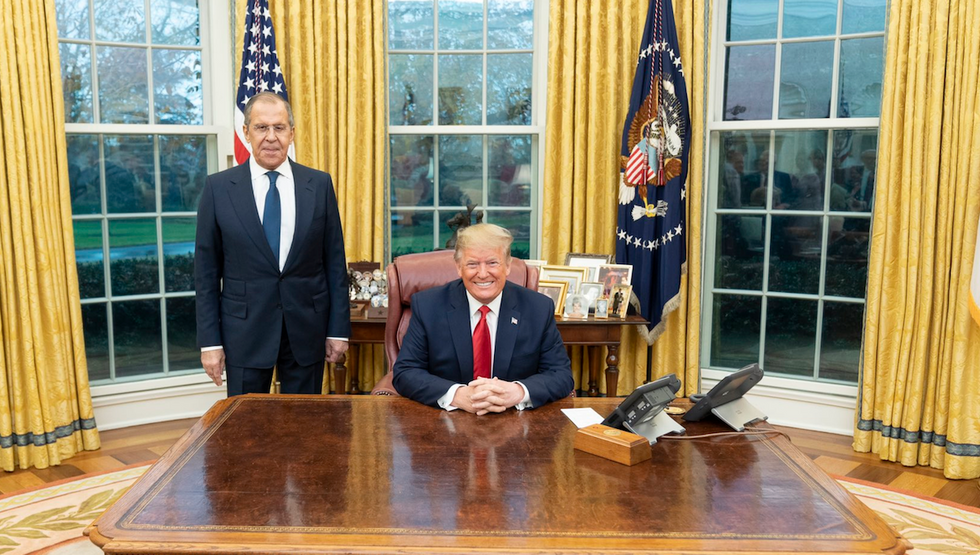 Despite the fact that President Donald Trump still refuses to have Ukrainian President Volodymyr Zelensky to Washington for an officials meeting — a topic at the center of the scandal driving Trump's impeachment — the White House hosted Russian Foreign Minister Sergey Lavrov on Monday.

And while Lavrov was honored with his second private Oval Office meeting (the first one was a cataclysmic disaster) and a press conference with Secretary of State Mike Pompeo, the foreign minister took his opportunity here to repeatedly humiliate the United States.

Standing beside Pompeo, Lavrov vehemently and condescendingly dismissed the conclusion of the U.S. intelligence community that Russia interfered in the 2016 election.

"We have highlighted once again that all speculation about our alleged interference in domestic processes in the US are baseless. There are no facts that would support that. We did not see these facts," Lavrov said. "No one has given us this proof because it simply does not exist."

Of course, Special Counsel Robert Mueller's report and public indictments meticulously documented extensive evidence of the Russian efforts to interfere in the election. But while he appeared as a welcome guest of the Trump administration, Lavrov proudly and contemptuously lied to the world and disparaged the findings of U.S. intelligence.

And it wasn't just his dispute of those findings that served to humiliate and undermine the United States. He also directly undercut the Trump administration. He said that when the allegations first emerged of Russian interference, Moscow had extensive communications with Washington denying the interference with both the Trump and Obama administrations. He said that the US should publish these correspondences so "it would all become very clear," trying to suggest that the U.S. federal government is covering up exonerating evidence in the case. He compared current criticism of Russia to 1950s McCarthyism.

Russian Foreign Minister Sergey Lavrov: "We have highlighted once again that all speculation about our alleged inte… https://t.co/8ttvshs9yj
— Aaron Rupar (@Aaron Rupar) 1576003525.0

Pompeo gave mild pushback to Lavrov's claims, but the indignity was already done.

"We think we've shared plenty of facts to show what happened in the 2016 election with our Russian counterparts," Pompeo said sheepishly. "We don't think there's any mistake about what really transpired there."

And it didn't stop there. After Lavrov and Trump had their meeting, the White House released a readout of their discussions, a typical practice to communicate the contents of the international dialogue. The readout said (straining some credulity): "President Trump warned against any Russian attempts to interfere in United States elections and urged Russia to resolve the conflict with Ukraine."

But Lavrov went on to undermine that claim, again embarrassing Trump, the White House, and the administration.

"We haven't even actually discussed elections," Lavrov told reporters after the meeting.

We shouldn't take Lavrov's claim on faith, of course. But it's not hard to believe that he's telling the truth in this case. We've already learned that a readout from Trump's first call with Zelensky falsely claimed that the presidents discussed "corruption." And Trump has repeatedly shown that he's distinctly disinterested in acknowledging or discussing election interference. But whether or not Lavrov is being honest, the effect is the same: To undercut the White House directly after accepting the honor of a presidential meeting.

Editor for The Guardian Julian Borger noted: "Later in the same press conference, Lavrov said that he told Trump about Pompeo's remarks about election conference, so contradicting himself and suggesting the issue did come up at the White House."

But he wouldn't confirm that Trump had specifically warned him against election interference.