Trump surpasses 15,000 false and misleading claims while in office 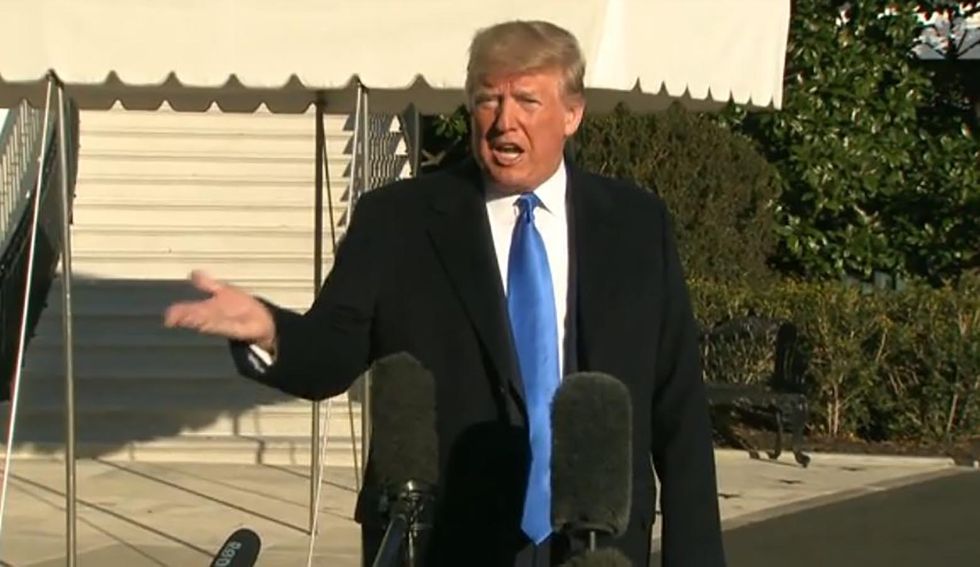 President Donald Trump has lied more than ever this year as he faces impeachment, bringing the total number of false and misleading claims he has made in office to more than 15,000, according to The Washington Post’s fact-checkers.

The number of false claims peaked in October and November, as House Democrats moved forward with an investigation that saw numerous administration officials defy Trump’s orders and testify to lawmakers. The only month when Trump made more false claims was in October 2018, before the Democrats won a majority in the House of Representatives.

Trump’s total increased substantially in 2019, because he has frequently pushed the same lies. He has made 80 false claims asserting that his phone call with the Ukrainian president was “perfect,” even though it set off panic inside the administration and led to the House Judiciary Committee approving articles of impeachment against him. He has made more than 60 false claims alleging that the whistleblower complaint that triggered the impeachment inquiry was inaccurate, but it was found to be credible by multiple top Trump appointees in the intelligence community and later corroborated by a procession of witnesses before the House Intelligence Committee.

Trump has also lied dozens of times about former Vice President Joe Biden, claiming that his Democratic rival forced out a Ukrainian prosecutor for investigating his son, and that Hunter Biden landed a $1.5 billion payday in China after flying in on Air Force Two with his father.

But while the rate of Trump’s lies has increased amid the fallout from his attempt to get Ukraine to publicly announce an investigation into the Bidens, his most consistent lies have been about the economy. Roughly one in every five claims from the president judged as false or misleading by The Post was about the economy or jobs. He has told his most frequent lie — that the U.S. economy is currently the best in history — more than 240 times despite higher growth under multiple presidents who did not wage trade wars hurting America’s own farmers and manufacturers.

He has told his second most frequent lie — that his promised border wall is being erected — more than 230 times. However, nearly all of the administration’s construction at the border has involved replacing existing fencing which had already been on the border for years.

Trump has told his third most frequent lie — that he passed the biggest tax cut in history — more than 180 times. President Ronald Reagan’s was roughly three times bigger.

Roughly one in five of Trump’s false and misleading claims have come via Twitter.

Though the media has occasionally fawned over Trump as a possible public relations genius, his strategy of doubling down, tripling down or telling the same lie literally hundreds of times does not appear to be particularly effective. Not only did his false claims fail to stop the Judiciary Committee from bringing articles of impeachment, a Washington Post poll found that less than 30 percent of Americans believe his most commonly deployed falsehoods. But the unending fact-checking of his false claims does not appear to have penetrated his bubble of support. Not only did every Republican on the Judiciary Committee oppose the articles of impeachment, a majority of Trump supporters in the poll said they believe some, though not all, of his most common false claims.

The frequency of Trump’s lies has befuddled fact-checkers.

“He is saying false/misleading/bizarre things in rapid succession, faster than I can type,” tweeted CNN fact-checker Daniel Dale during a recent Trump rally in Louisiana.

Daniel told CNN host Don Lemon that Trump’s lies about the Ukraine scandal have been particularly insidious because of “how comprehensively Trump is lying.”

“If you fact-check Trump — or just watch Trump — you know that he lies about basically every subject,” Dale explained. “What’s unique about the Ukraine story is that he’s lying about basically every individual component of the story . . . Everything he’s saying about his dealings with Ukraine, about the Bidens’ dealings with Ukraine, about the whistleblower, about [House Intelligence Chairman Adam] Schiff, about the impeachment process — it’s all wrong, all the time.”

CNN host Jake Tapper recently presented a special on the extent of Trump’s lies and told Politico that his falsehoods should be called out as such, because “there’s obvious malice of forethought.”

Tapper said Trump is trying to “undermine” facts “in order to try to gaslight the country.”

“God forbid there should be some major international crisis where the U.S. president needs the people of this nation and the world to believe what he says about something,” Tapper lamented. “What would the result be?”