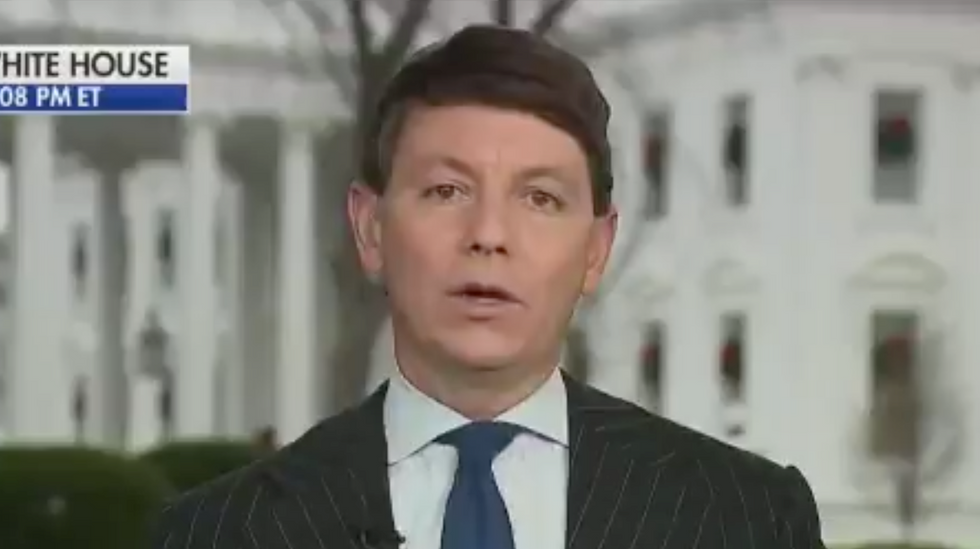 There's been no shortage of hypocrisy and irony in the age of President Donald Trump, but White House Deputy Press Secretary Hogan Gidley still stood out on Friday with a galling comment about impeachment to Fox News.

As usual, his defense of Trump against the charges in the Ukraine scandal was staggeringly dishonest. Gidley claimed the president "didn't press [Ukrainian President Volodymyr] Zelensky on anything other than getting to the bottom of corruption in his country" — an assertion unequivocally contradicted by the facts as confirmed by the White House itself. Rather than mentioning anti-corruption efforts in Ukraine on two separate phone calls earlier in the year, as his aides had advised him to, Trump instead pressed Zelensky to investigate his own U.S. political opponents. Trump didn't even mention the word "corruption."

Somehow even more repugnant than this blatant lie, though, was Gidley's attack on the Democrats' impeachment efforts. While it's legitimate to ask about how important impeachment should be relative to other priorities, Gidley made the jaw-dropping claim: "As you head into Christmas, and you head into the holiday season, people are going to want results from Congress. And right now, all they're getting is hatred, vitriol, and a sham impeachment hearing that doesn't do anything to put food on the tables of the Americans people."

Now, the idea that a Trump spokesman would complain about others spreading "hatred, vitriol" when the president himself calls his critics "human scum" is ridiculous enough on its own. But Gidley's claim that impeachment "doesn't do anything to put food on the tables of the Americans people" crosses into new levels of hypocrisy in the wake of the administration's effort to cut the Supplemental Nutrition Assistance Program — what we call "food stamps" — that could affect around 700,000 families. The Guardian reported:

Hundreds of thousands of Americans who rely on the federal food stamp program will lose their benefits under a new Trump administration rule that will tighten work requirements for recipients.

The move by the administration is the latest in its attempt to scale back the social safety net for low-income Americans. It is the first of three proposed rules targeting the Supplemental Nutrition Assistance Program, known as Snap, to be finalized. The program feeds more than 36 million people.

The plan will limit states from exempting work-eligible adults from having to maintain steady employment in order to receive benefits.

Gidley may even have realized his grotesque error as he was speaking. In the clip, his voice briefly catches on the word "food" — perhaps realizing in the moment how colossally ironic his claim was.

Democrats have, in fact, worked to push legislation that to affect the lives of Americans — but Republican Senate Majority Leader Mitch McConnell champions overseeing a "legislative graveyard" where all these efforts die. Meanwhile, the White House uses its powers to make peoples' lives worse while claiming to defend the forgotten man and woman.

Hogan Gidley: as we head into Christmas, please remember that impeachment isn't putting food on the table of the Am… https://t.co/OvVkcxIEWY
— Aaron Rupar (@Aaron Rupar) 1575656251.0