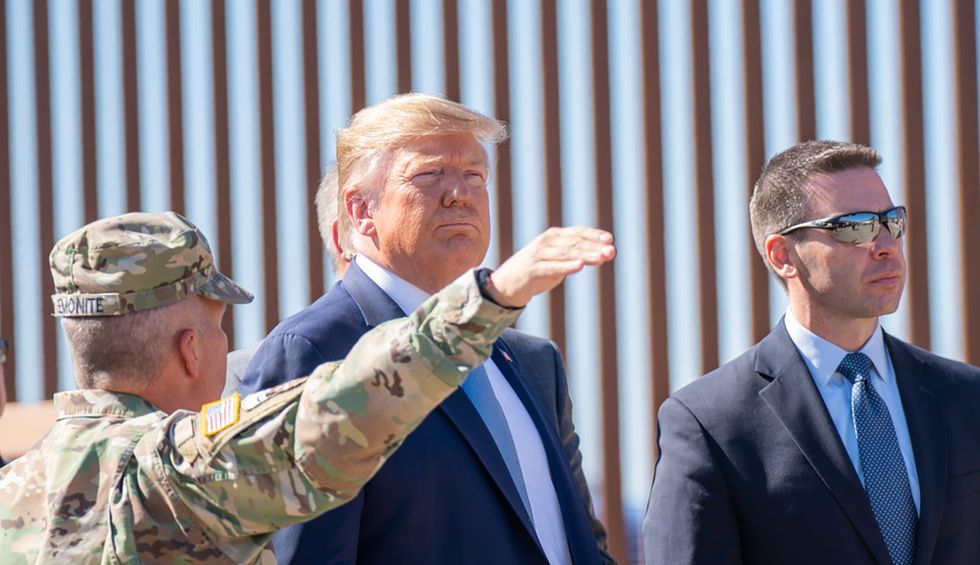 While articles of impeachment were being introduced against Donald Trump in the House of Representatives on Tuesday, a federal judge in Texas was blocking funding for his pet project, ruling that he couldn't use money appropriated by Congress for military construction for his wall on the border between the U.S. and Mexico.

Trump has attempted to divert $3.6 billion from military construction and another $2.5 billion from drug interdiction to build the wall, since Congress won't give him the billions he wants. Judge David Briones of the United States District Court for the Western District of Texas ruled that Trump's diversion of funds is illegal, arguing that Trump overstepped his authority by "declaring a national emergency and violating laws of Congress limiting funds for barriers at the United States-Mexico border." The Constitution gives the Congress the power of the purse, and Trump violated that. Kristy Parker, a lawyer for the organization Protect Democracy, which represented the plaintiffs in the case, said in a statement following the ruling, "The President's emergency proclamation was a blatant attempt to grab power from Congress. […] Today's order affirms that the President is not a king and that our courts are willing to check him when he oversteps his bounds."

El Paso County and the Border Network for Human Rights brought the suit, making the constitutional argument and claiming that the county would suffer "reputational and economic harm" because of the wall and Trump's emergency declaration. Trump has tried to paint the city and county as dangerous, and the wall reiterates that impression, plaintiffs said. In reality, El Paso has ranked as one of the 10 safest cities in the country. In an earlier ruling in October, Judge Briones ruled that the claim had merit.

The president is not a king, though he's been emboldened by a Supreme Court ruling last summer in a separate case in California. That ruling allowed the administration to continue construction of the wall pending its appeal to the 9th Circuit Court of Appeals in a case brought by the American Civil Liberties Union on behalf of the Sierra Club and the Southern Border Communities Coalition.