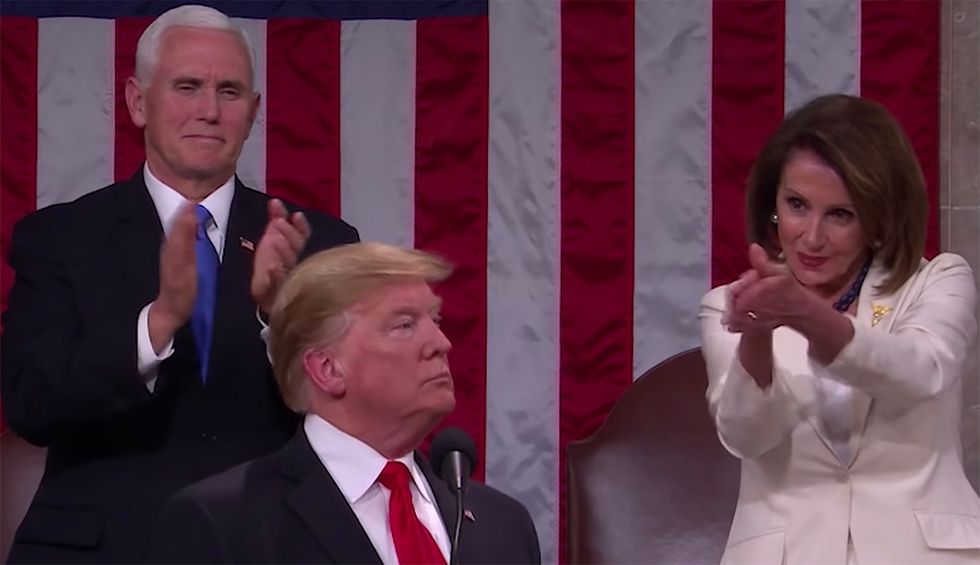 Love her or hate her, Nancy Pelosi is a classy, effective and persuasive Speaker.

Along the way, she manages to count votes, keep her caucus in line and stand up for a totally understandable and admirable bar of justice and American value, for the Constitution itself.

Her statements yesterday in outlining in measured tones the reasoning that Donald Trump’s actions have left “no choice” but moving forward towards impeachment were well-said, logical, and belied the emotion behind them.

Her decision to turn back to the podium to handle a reporter’s question about whether she “hates” Donald Trump was simply brilliant. Her reply about an upbringing of love was at once deft and devastating.

Pelosi is at the height of her persuasive, political powers, defining what we do not see in Mitch McConnell, Kevin McCarthy, Chuck Schumer or Donald Trump himself—positive leadership that is refreshing and necessary.

In short, Pelosi, in showing that she is at the height of her persuasive, political powers, is also defining what we do not see in Senate Majority Leader Mitch McConnell or House Minority Leader Kevin McCarthy, or even Senate Minority Leader Chuck Schumer or Donald Trump himself—a sense of positive leadership that is refreshing and, frankly, necessary.

It momentarily makes one wonder why she is not the Democratic candidate for president.

Standing Up to Trump

Let’s be clear: Standing up to a president who has all the Senate votes he needs in his back pocket is no simple or easy feat.

It’s not only courage: Other Democrats who try to do so sound too often as yapping dogs chasing a race car.

It has something to do with effectiveness.

That photo of Nancy Pelosi in the Cabinet Room from a few weeks ago standing up to leave an insulting White House meeting by reminding Trump that virtually every policy his administration is taking is helping Russia has burned into our collective memory–for those for or against Pelosi herself.

That image of Pelosi at the State of the Union clapping in a way that showed respect for Trump but made clear that the gesture also reflected condescension for his ideas has proved another such iconic moment.

Pelosi’s turnabout from White House pique canceling planes for an overseas Congressional trip to arrange her own transportation was yet another such stand-up moment.

So, too, have been the substantive disagreements over Trump shutting down the government in hopes of winning financial support for building the Wall, or the eventual halt she and Congress forced in aggressive child separation at the border or holding the rewritten United States-Mexico-Canada agreement for better employee conditions.

Pelosi has proved a better Speaker than Paul Ryan or John Boehner or almost any predecessor back to Tip O’Neill.

Abuse of the Constitution

As the single, final focus for the impeachment decision, Pelosi had to show that this is not a partisan effort. She tried hard, with multiple House committees tasked to look into the multi-faceted bad policies of the Trump administration.

Pelosi made clear, however, that there is separation from Trump the bad guy, Trump the bad governor, and Trump, the abuser of Constitution and American fairness values. It is that latter piece that Pelosi underscored made clear was a final straw, that left her with “no choice.”

We need to remember that the person most responsible for impeachment is not Pelosi. It is Trump.

Trump’s rogue efforts with Rudy Giuliani continues today, with Giuliani back in Ukraine videotaping past officials there internationally associated with corruption in hopes of throwing dirt on Joe Biden. It is Trump himself who now wants to call Joe and Hunter Biden before the Senate impeachment proceedings–as if their actions erase his own basic Constitutional violation of reaching out to other nations to interfere in U.S. elections. It is Trump who is trumpeting conspiracy theories that are repeatedly being debunked. It is Trump who is ordering his staff member witnesses to ignore Congressional subpoenas.

In this drama, Pelosi stands for rules. Trump stands for Trump, and cows Republicans in Congress to support him with threats of primary elections to replace anyone who criticizes him.

Just for a moment, perhaps all can doff their hats to Pelosi for doing what she believes in with reason, persuasion and effectiveness.