'The president is the smoking gun': Pramila Jayapal makes case for Trump's impeachment ahead of House vote 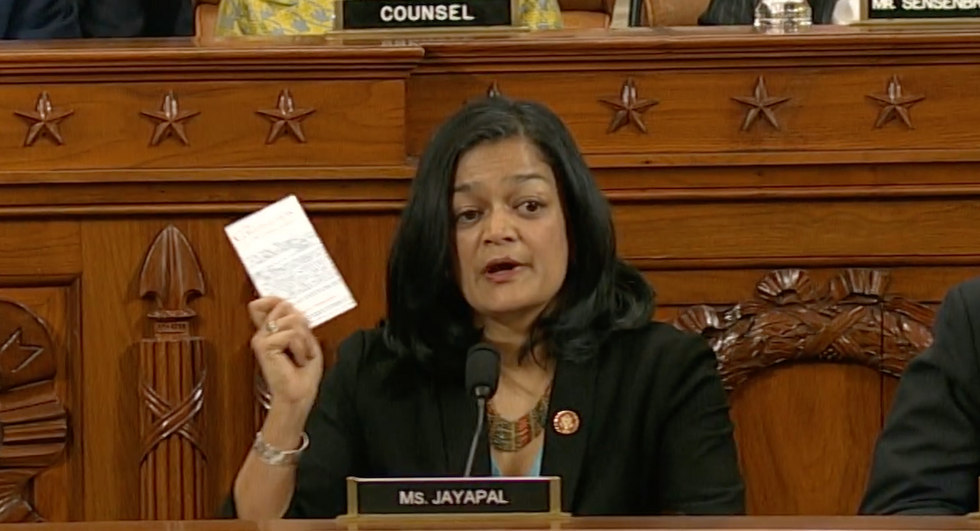 Rep. Pramila Jayapal, co-chair of the Congressional Progressive Caucus, explained in a floor speech Wednesday why she plans to support both articles of impeachment against President Donald Trump ahead of the House's expected vote.

"This is a day of accountability and defending our democracy," said Jayapal. "The facts in front of us are clear. This president, Donald J. Trump, coerced a fragile foreign ally to investigate his political opponent and interfere in our elections. And he leveraged critically needed, congressionally approved military aid to Ukraine."

The Washington Democrat dismissed House Republicans' claim that Trump withheld the aid out of genuine concerns over corruption in Ukraine.

"In fact, on those two calls with [Ukrainian] President [Volodymyr] Zelensky, he never mentioned the word 'corruption'," Jayapal said. "He solicited foreign interference before, he is doing it now, and he will do it again. The president is the smoking gun."

"Our founders, Mr. Speaker, entrusted us with the awesome responsibility of protecting our democracy, which gets its power not from the bloodlines of monarchs but from the votes of we, the people," Jayapal continued. "Without that, we are no longer a democracy—we are a monarchy or a dictatorship. And so today, to uphold my oath to Constitution and country, I will vote to impeach Donald J. Trump."

The House is expected to vote on the two articles of impeachment by Wednesday evening. The articles charge Trump with abusing the power of the presidency and obstructing Congress.

The vote will come a day after hundreds of thousands of people took to the streets across the country to demand Trump's impeachment and removal from office.

"Today's vote is historic proof that grassroots activism matters—and it works," tweeted Sean Eldridge, founder and president of advocacy group Stand Up America. "In the face of Trump's criminal abuse of power, Americans rose up and organized and demanded accountability. Thanks to that activism, the House will act today to hold a lawless president accountable."

As the House debated the impeachment articles on Wednesday, Trump erupted on Twitter.

"SUCH ATROCIOUS LIES BY THE RADICAL LEFT, DO NOTHING DEMOCRATS," the president tweeted. "THIS IS AN ASSAULT ON AMERICA, AND AN ASSAULT ON THE REPUBLICAN PARTY!!!!"