The media keeps ignoring the biggest story of the impeachment proceedings 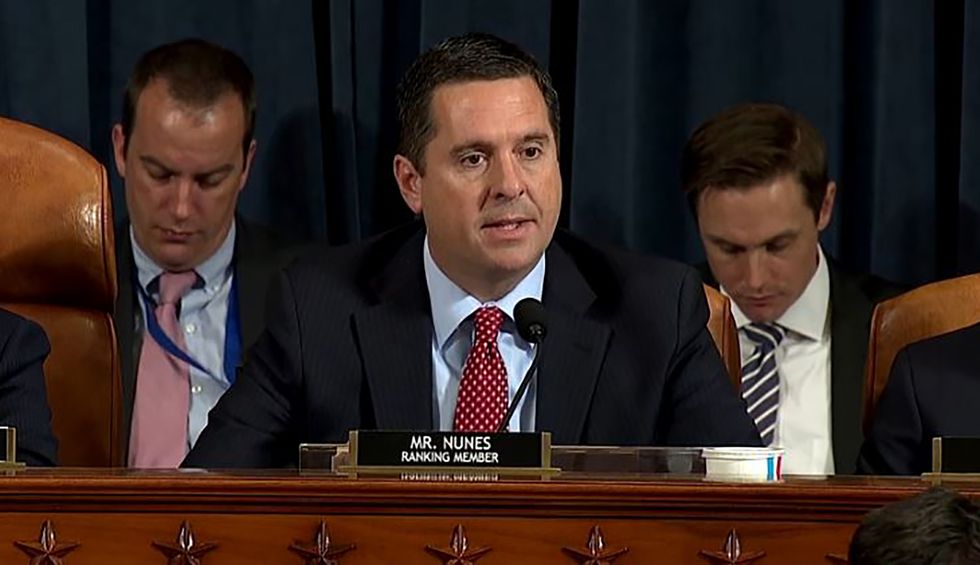 With the House Judiciary Committee poised to take up the impeachment baton and hold a new round of public hearings this month, the Beltway press continues to absorb and echo Republican talking points that claim the inquiry isn't resonating with Americans. Because impeachments aren’t legal proceedings, the messaging wars that surround them take on added importance. And right now, by treating as no big deal the fact that basically half the country supports removing the president of the United States from office, the media is greatly helping Republicans spread their preferred impeachment message: The inquiry isn't resonating.

"It’s a disappointing—if not unexpected—response for Democrats, who had hoped to use the hearings to sway public opinion," the Associated Press recently reported, suggesting impeachment has been a political failure for Democrats because the hearings in recent weeks have not produced a tidal wave of public support. "Without that backing, it’s virtually impossible to imagine Republican senators voting to convict Trump."

Since Democrats announced their intention to hold impeachment hearings, public support for the inquiry has jumped 16 points, according to the tabulation at FiveThirtyEight, with public support for Trump's removal from office increasing by 7 points. That's solid confirmation that Americans are engaged on the issue and support the historic Democratic push to hold Trump accountable. It's especially impressive during these polarizing times, when partisans remain so entrenched on most issues.

But much of the press coverage treats this development with a shoulder shrug, stressing that since the start of the impeachment hearings, the polls haven't budged. But that premise is built on the fantasy that there was ever going to be a floodgate—or an a-ha!—moment where the masses raised up against Trump. That, of course, is not mathematically possible because the vast majority of today's Republican Party, including elected officials, has essentially adopted the radical position that Trump can do no wrong: that there are no crimes or misdemeanors that Trump should be held accountable for. Indeed, 68% of Republicans say there's nothing that could emerge from the hearings that would change their mind about impeachment.

That's the most important impeachment story that most of the press continues to look away from—the fact that one of our two major political parties in this country no longer deals in facts and reality, and instead has willingly burrowed itself into a world of lies and fantasy, specifically when it comes to the issues surrounding impeachment.

In fact, some Republican officials are now actively working alongside a Kremlin disinformation campaign regarding Ukraine's role in American elections.

If more journalists openly acknowledged this crucial development regarding the GOP, the fact that Republicans aren't willing to support impeachment would no longer be treated as "news," and the press wouldn't portray Democrats as failing with their impeachment messaging. What's also completely lacking is any kind of historical context regarding how awful those impeachment poll numbers are for Trump.

When Republicans in the House spent 1998 impeaching Bill Clinton, Americans across the board rejected the inquiry. At no point during the partisan process did more than 30% of Americans support impeachment, and most of the time that number hovered around 25%. Republicans categorically failed to change the nation's mind about Clinton, who famously weathered the political storm with historically high approval ratings, logging a staggering 71% approval rating in a Pew Research poll.

Today, more than twice as many Americans support the impeachment of a Republican president than supported the impeachment of a Democratic president two decades ago.  Yet the press portrays the Trump impeachment as a political and public relations failure for Democrats. How does that work exactly? Note that it wasn't until July 1974, one month before President Richard Nixon resigned, that a plurality of Americans finally agreed that he should be forced from office. Today, a plurality already feels that way about Trump, yet the press shrugs.

And the no-winner narrative remains constant. From The New York Times:

House Democrats insist they are leading an impeachment inquiry into President Trump for one simple reason: His actions have left them no other choice. The president and his Republican allies argue that the inquiry is just an attempt to tear him down — “an illegitimate sham partisan process,” as the White House press secretary, Stephanie Grisham, put it on Wednesday. But with the first round of public hearings wrapped up and another scheduled for Wednesday, which message is sticking across the country?

The Times' conclusion? It's a toss-up: "As a result, support for or opposition to impeachment rarely climbs much higher than 50 percent in any poll." This is what you call missing the big picture, and most of the Beltway press is now doing it with regard to impeachment.

The news media are committed to a storyline that says impeachment is only a "success" if the hearings spike public support, and not whether the hearings unequivocally show wholesale abuse within the executive branch, which they clearly have done. There's simply no question that Trump used $391 million of U.S. taxpayer-funded military aid to extort the Ukrainian government into opening a bogus investigation for Trump’s own personal and political gain.

And the public gets it.