The hangover in literature -- from Shakespeare and Burns to Bridget Jones 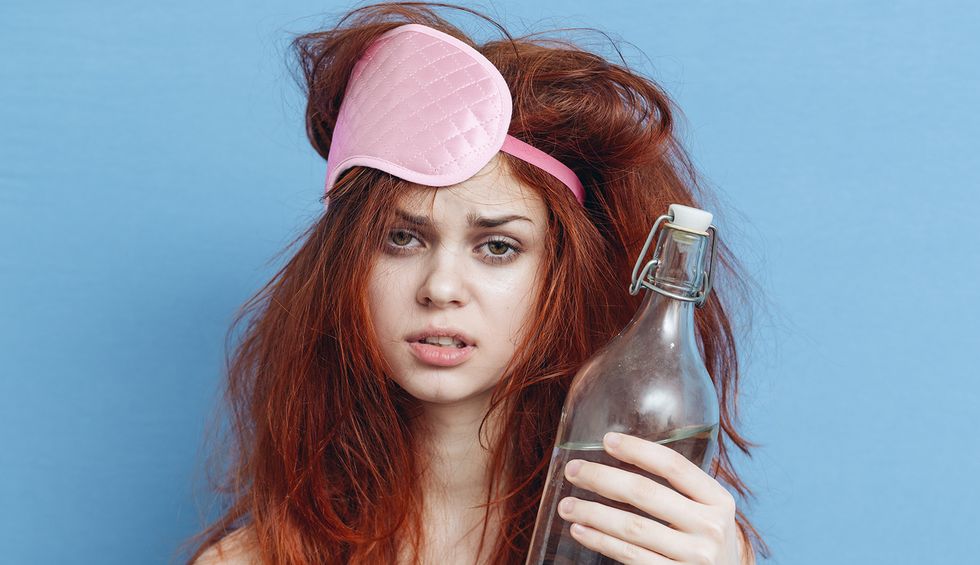 What a subject! And, in very truth, for once, a ‘strangely neglected’ one.

So Kingsley Amis began his famous 1971 essay on the hangover How different is our present moment, when it would be hard to find a media outlet on New Year’s Day not featuring an item about the effectiveness of remedies. Every age has its preferred cure: Pliny the Elder advocated raw owl’s eggs in wine. Shakespeare refers to “small ale”, which remained popular into the 19th century. The early 20th century was the golden age of hangover cocktails such as the Bloody Mary and the Prairie Oyster – but also of Alka-Seltzer. Amis recommends a “Polish Bison” – vodka mixed with hot Bovril.

Even scientists have got involved and hangover research is a subfield of medicine and psychology. Studies have explored links between hangover severity and alcohol use disorders, the hangover’s economic cost, the effectiveness of remedies and the ethical implications of a pharmaceutical cure.

The bad news is that, if you’re feeling unwell this morning, all reputable studies have shown that the only thing guaranteed to relieve symptoms is the passing of time.

To be fair, Amis never thought that remedies – and physical after-effects including headache, nausea and dehydration – had been ignored. What had really been neglected was what he termed the hangover’s “metaphysical superstructure”. That is all the emotional baggage that often follows drinking: guilt, shame, self-pity and the more nebulous “hangxiety”.

Science can tell us why we feel sick after heavy drinking: dehydration, contracted blood vessels causing headaches and the build-up of acetaldehyde. But when a hangover makes us unwell we don’t just mean physical symptoms.

Science finds emotions less susceptible to measurement than physical effects. For the former, we require literature and the arts. Literature is an outlet for feeling, but also an expression of individual and cultural values. There is a surprisingly rich tradition of hangover literature in western culture – in writers as diverse as Shakespeare and Jane Austen, Robert Burns and George Eliot, Jean Rhys and Helen Fielding – that has been largely ignored and goes some way to explaining why hangovers might make us feel like mending our ways.

In a 1791 epistle to Maria Riddell, a wretchedly hungover Burns apologises for an unwanted sexual advance on her sister-in-law. “I write you from the regions of hell, amid the horrors of the damned”, he begins, before bemoaning his “aching head reclined on a pillow of ever-piercing thorn”, and “an infernal tormentor” called “Recollection”.

This is penitent’s rhetoric, reminding us that Burns lived in rigidly moral Presbyterian Scotland. Pounding head and dehydration are just reprisal for his indiscretion and his letter is an apology for sinfulness. Shame is a powerful cultural force: if there is a cure here it will be found in forgiveness.

Hangovers often reveal the personal and social values that make us feel “bad”. In other words, the hangover is both a physical and cultural deterrent. Guilt and shame are not just nervous reflexes but part of a superstructure of values – Amis chose his words wisely – without which they cannot be understood.

Science argues that hangover severity is different for men and women, focusing on metabolism and body mass. But surely the real differences are sociocultural? We could compare the hangovers of the alcoholic journalist, Peter Fallow, from Tom Wolfe’s The Bonfire of the Vanities (1987), with those suffered by Helen Fielding’s ladette, Bridget Jones.

When hungover, Fallow seeks penance through strenuous exercise: “Never again. He would begin an exercise regimen tonight. Or tomorrow, in any case.” Wolfe makes it evident that hangxiety is not free floating, but derives from Fallow’s impression of being culturally tarnished: “It wouldn’t be this pathetic American business of jogging, either. It would be something clean, crisp, brisk, strenuous … English.” The body is a site of cultural meaning.

Jones faces low self-esteem when hungover. Her worries superficially recall those of Fallow, but her negative self image involves the distinctive pressures put upon women to marry and have children. She obsesses about weight gain, her looks (“Oh why am I so unattractive? Why?”), her ability to attract a partner and her ticking body clock.

The hangover’s impact on family life has been the focus of hangover studies. Here literature also points us to cultural variables.

The wife who nags her husband for his drunken ways is a stock figure of comic fiction from the 16th century to the present day. John Taylor captures the type in his colourful Skimmington’s Lecture (1639):

What not a word this morning … have you lost your tongue, you may be ashamed, had you any grace in you at all, to bee such a common drunkard, a pisse-pot.

But in the Victorian period Janet Dempster in Eliot’s Janet’s Repentance (1857) tells us of a different domestic power dynamic. Because she is unable to reproach her abusive, though popular, husband, she drowns her sorrows. While Robert’s “good head” for drink is legendary, Janet’s hangovers mean she neglects housework and loses her “good” reputation. Her shame shows that she is held to a different set of standards than her husband, the “stigmatising subject position” of women drinkers. (Janet is, however, able to repent, while Robert ends up dying after delirium tremens.)

It is possible to defy moral judgement for our lack of self-care, wasted time or embarrassment. However, even the most rebellious of literature’s drinkers feel self-doubt bite during hangovers. Martin Amis’s John Self (Money, 1984), Alan Sillitoe’s Arthur Seaton (Saturday Night and Sunday Morning, 1958) and A. L. Kennedy’s Hannah Luckraft (Paradise, 2004) are notorious for recklessness and defiance when drunk. Their hangovers are, however, some of the most crippling in literature. Luckraft revels in blackouts and casual sexual encounters, but admits: “Inside, I am mostly built out of remorse.” Self’s hangovers are a necessary curb on a particularly toxic brand of masculinity. Seaton’s motto is “don’t let the bastards grind you down”, but the hangover of Sunday morning succeeds boozy Saturday nights and he eventually submits to marriage and a steady job.

Literature shows that hangovers are rarely just a collection of physical symptoms. A recent leader article in The Guardian was given the headline: “The Guardian view on the science of hangovers: no more research needed”. Perhaps we don’t need another article about the best remedies – but it is worth reflecting that there is much more to a hangover than bodily symptoms.

Hangover literature tells us quite a lot about our attitudes to alcohol, how they form and what they mean. This New Year, alongside the Bloody Mary, it might just be worth picking up a book. I don’t claim it will make anyone feel better, but it could help us understand a little more about why drinking often makes us feel bad about ourselves.