Republicans blundered badly as their own expert impeachment witness wrecked their defenses of Trump: conservative columnist 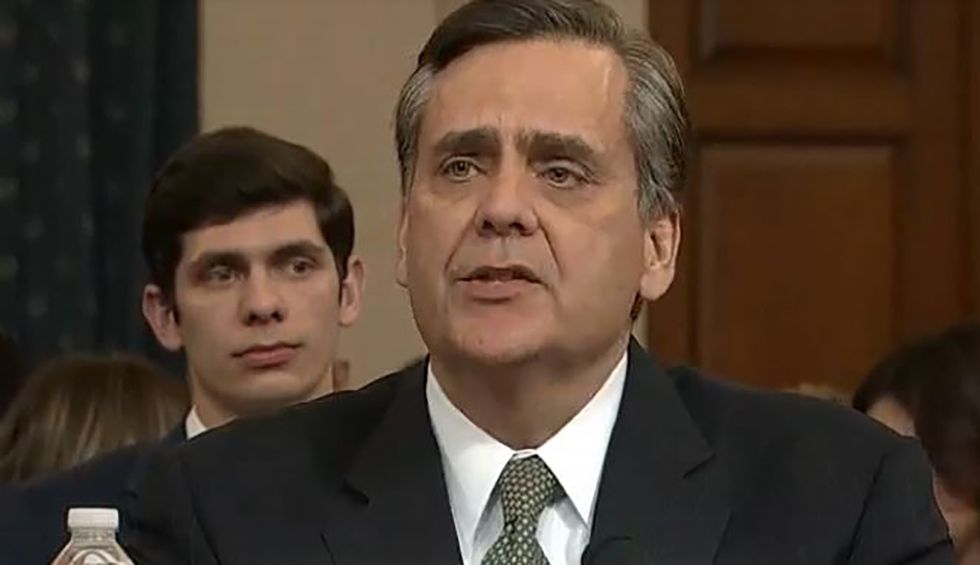 Republicans on the House Judiciary Committee pinned their hopes on George Washington University law professor Jonathan Turley, their sole expert witness on the panel at the hearing on Wednesday, to discredit the impeachment probe into President Donald Trump.

But as anti-Trump conservative columnist Jennifer Rubin wrote for the Washington Post, even Turley’s testimony ended up damaging the GOP more than Democrats, because he undercut one of the GOP’s most solid narratives in defense of the president: that trying to extort Ukraine with military aid would not be impeachable even if it was proven.

Turley, wrote Rubin, “did not make an impressive case against impeachment. He blatantly contradicted his position pre-President Trump that a criminal violation was not required for impeachment. Moreover, his main argument, namely that the House was moving too fast, leaves open the question as to whether in a few weeks or a month he might support impeachment.” Moreover, “Turley made some arguments that frankly do leave one wondering why Republicans thought he would be valuable.”

“For example, Turley acknowledged, ‘[Trump’s] call was anything but ‘perfect’ and his reference to the Bidens was highly inappropriate,'” wrote Rubin. “It was highly ‘inappropriate’ because we do not invite foreign governments to investigate political rivals. The ‘ask’ was in and of itself a serious and impeachable act, especially given Trump’s own statements that he will continue to invite foreign meddling.”

“Turley also confessed, ‘The use of military aid for a quid pro quo to investigate one’s political opponent, if proven, can be an impeachable offense,'” wrote Rubin. “And we would assume that conditioning a White House meeting desperately needed by an ally could also be an impeachable act. Well, we had multiple witnesses including Ambassador to the European Union Gordon Sondland testify to precisely that. Experienced prosecutors, I am quite certain, could get a conviction under the criminal standard, beyond a reasonable doubt.”

Turley’s fundamental argument, Rubin continued, also didn’t help Democrats — he argued that the committee cannot proceed without testimony from key witnesses, but that opens the door for Democrats to accuse Trump of obstruction for not allowing those officials to respond to subpoenas, something Turley himself acknowledged was unprecedented. It also opens the door to Democrats impeaching Trump on obstruction now, and continuing the inquiry on bribery to force those officials to testify, which would appear to comply with what Turley argued was the proper standard.

“In short, Republicans once more appear to be their own worst enemies,” concluded Rubin. “If Turley is an example of the type of witnesses they think helpful, perhaps Chairman Jerrold Nadler (D-N.Y.) should allow them to call many more.”