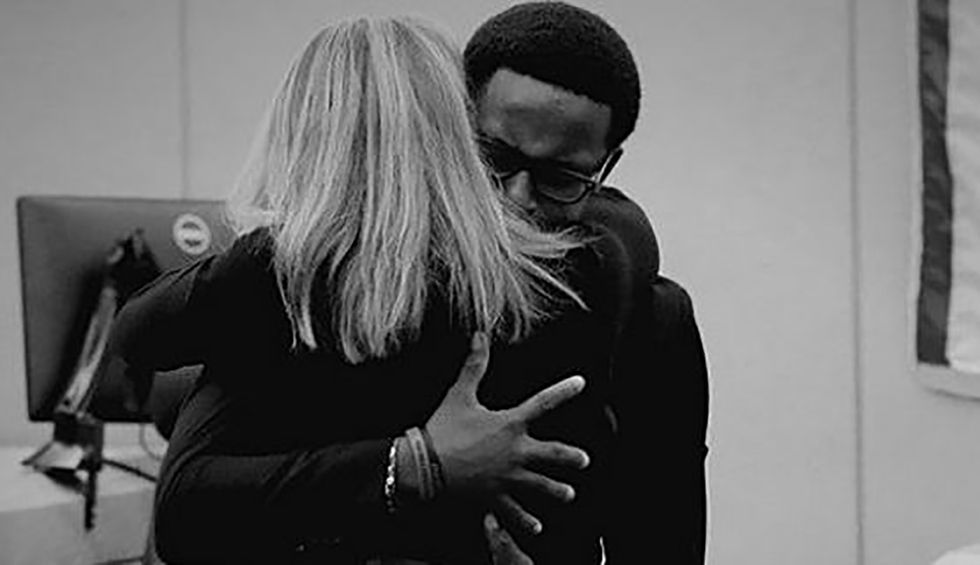 In a cringy Texas ceremony, the brother of a black accountant shot to death in his own apartment by former Dallas cop Amber Guyger accepted an award from law enforcement officials for announcing he forgave the convicted murderer.

The Institute for Law Enforcement Administration presented the award usually reserved for first responders and law enforcement workers to Brandt Jean Tuesday at its Contemporary Issues and Ethics Conference in Plano, which is about 20 miles north of Dallas.

Brandt Jean, the younger brother of Botham Jean, used the ceremony to advocate for justice in other officer-involved shootings. “I don’t want police officers to continue doing this. As you can see, it’s not healthy, especially for the black community, black males specifically,” he said, according to CBS DFW. “We don’t want this to happen again. We want the training to be applied 24/7 because we citizens put our trust in those officers every day.”

Brandt Jean also asked officers to think about his brother. “I ask you to remember my brother, my example of ethical leadership,” he said. “A young, black male that was perceived as a threat by one of your own. And when you remember him, I want you to ask yourself, ‘what are you doing to ensure no other families like mine.'”

Brandt Jean had earlier faced quite a bit of backlash when he made a public statement saying he forgave Guyger, just moments after the cop was sentenced on Sept. 6 to 10 years for his brother’s death.

“If you truly are sorry,” the 18-year-old said, “I know I can speak for myself. I forgive you, and I know if you go to God and ask him, he will forgive you.”

RELATED: I wish that black people would stop making a public spectacle of forgiving white folks.

He then went a step further: “I don’t know if this is possible, but can I give her a hug please, please,” he asked Judge Tammy Kemp. Not only did she allow it, but the judge hugged Guyger too, gifted her a Bible, and offered her words of encouragement, which Kemp said on The Tamron Hall Show she often does when offenders are sentenced.

Although some applauded the shows of forgiveness, black Twitter was largely not amused, and still isn’t.

Many remembered that during the sentencing phase, prosecutors presented several violent and racist social media posts and text threads, one of which was from Jan. 15, 2018, during the Martin Luther King Jr. parade in Dallas.

“When does this end lol,” someone said in the text to Guyger.

“When MLK is dead… oh wait…” she responded.

In another message thread, Guyger was told she should adopt a German Shepherd “although she may be racist.”

So some, including Bishop Talbert Swan, were a bit distrustful of officers’ intent in giving Botham Jean’s brother an award.

“Black men who fight against white supremacy are ‘race baiters,’ those who forgive racists who murder us are heroes,” Swan tweeted Monday.