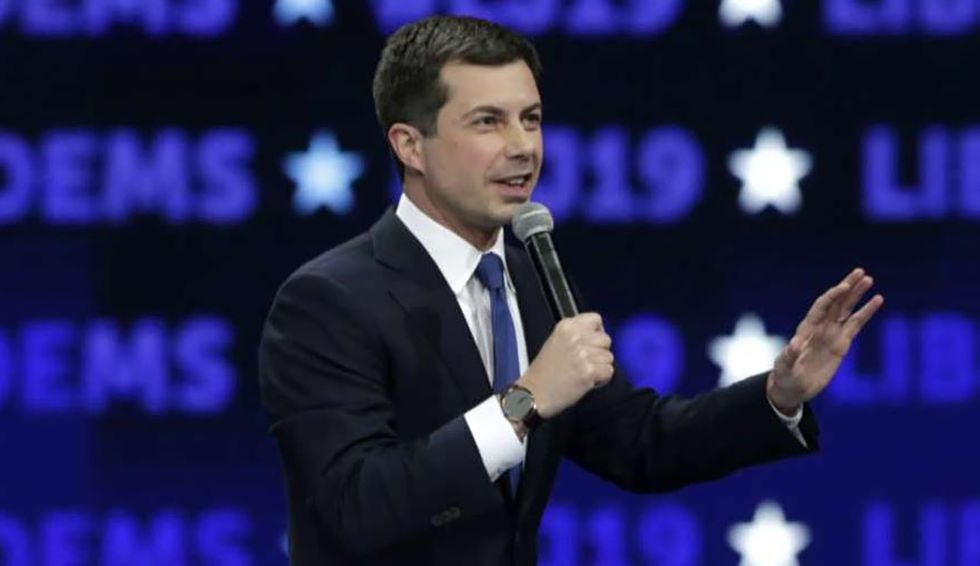 That's the word from the mayor's campaign manager Mike Schmuhl, who said in a statement that the campaign would allow the press into the events.

South Bend, Indiana Mayor Pete Buttigieg—currently a rising contender for the 2020 Democratic presidential nomination—is coming under increased fire for a lack of transparency around campaign fundraising.

At the Local America Presidential Forum in Iowa Friday evening, Buttigieg told reporters he would not follow the lead of former Vice President Joe Biden and allow the press into campaign fundraisers nor would he release transcripts of remarks to donors, citing "considerations." When asked if he would elaborate on what those considerations were, Buttigieg replied, "No."

The comments, and the Buttigieg campaign's perceived general attitude toward honesty on campaign finance, generated criticism from progressives.

"The aggressive arrogance and utter contempt for basic transparency on display here is stunning," tweeted The Intercept's Glenn Greenwald. "Usually candidates hide these attributes until they win."

"I dunno about you, but I think Mayor Pete should release the transcripts of his closed-door fundraisers," tweeted Margaret McLaughlin, a member of the Democratic Socialists of America Metro D.C. branch.

Questions over transparency and campaign fundraisers dogged Buttigieg through the weekend. On Sunday in Iowa, student Greg Chung asked Buttigieg if the mayor's campaign would stop taking money from billionaires at closed fundraisers. Buttigieg echoed his response to reporters from Friday—"No."

Instead of transparency, Buttigieg has attacked the Sen. Elizabeth Warren (D-Mass.) campaign over the senator's prior employment as a lawyer.

After Buttigieg on Saturday released a sparsely detailed, vague overview of his work for consulting firm McKinsey, Warren released detailed information related to her $2 million in earnings over three decades for her work as an attorney on antitrust law Sunday—putting the onus back on Buttigieg to do the same for his record in the private sector.

Some of Buttigieg's work may have been to slash jobs at Blue Cross Blue Shield Michigan while raising customers' premiums, opined Wendell Potter, a former health insurance executive. The Intercept's Ryan Grim wondered how that might play in the crucial battleground state.

"If this claim is true, how does he win Michigan?" said Grim. "The Trump ads write themselves."

Buttigieg's campaign has struggled to balance critiquing Democratic opponents on issues around campaign transparency while presenting the Indiana mayor as above the fray. On Sunday, Buttigieg replied to protesters holding signs calling out the mayor's lack of support among black voters and what demonstrators saw as an insufficient climate plan by telling protesters that in his view it was "better to lift up your own candidate than trying to tear down others."

As Pete Buttigieg took the stage in Coralville, some protesters unfurled a series of banners. Buttigieg nodded to… https://t.co/Jrnp1vaMkP
— DJ Judd (@DJ Judd) 1575836422.0

That line was immediately attacked by critics as a cop-out.

"Pete's campaign has been openly attacking Warren for the past 72 hours but when people raise concerns over his support from black people he pulls this 'don't try to tear down others' card," tweeted activist Jordan Uhl. "What a fucking weasel."